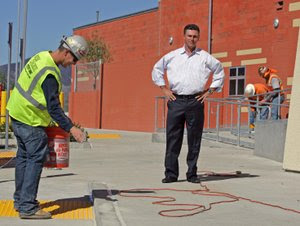 LABJ Editor's Note: This ninth [ONLINE] graph [DRAFT?] of this story has been changed from the print version to correction [sic]  a mischaracterization in the nature of the benefit funds in project labor agreements.

Monday, November 1, 2010 -- Nonunion contractors who oppose union-friendly agreements on public works projects have a fresh argument to strengthen their campaign to ban such agreements.

An audit commissioned by the nonunion contractors alleges violations by 55 contractors working on a $150 million Los Angeles Unified School District high school under construction in San Fernando. The alleged violations include failure to pay prevailing wages and inadequate supervision. Four of the contractors had expired or suspended licenses.

A construction union spokesman rejected the findings of the audit. Richard Slawson, executive secretary and treasurer of the Building Trades Council of Los Angeles and Orange Counties, said that there are more violations on most any job involving nonunion contractors.

The trade group representing nonunion contractors has forwarded the audit to two state agencies for further review. If the Division of Labor Standards Enforcement and the Department of Apprenticeship Standards verify the audit findings in coming months, the school district and project contractors – including New York-based general contractor Turner Construction Co. – could be on the hook for hundreds of thousands of dollars in penalties and back pay.

“This audit is very disappointing and even shocking,” said Chris Chase, president of Triple C Electric, a Valencia-based nonunion electrical contractor that refuses to bid on projects with these union-friendly agreements.

Chase added that he was particularly outraged at the apparent lack of oversight on the high school project at the center of the audit.

“It sounds like everyone just said, ‘Oh, they are all union workers, so they can just monitor themselves,’” he said. “You know that if a nonunion contractor was in there, there would be such extensive monitoring that violations like this would not be allowed to go unchecked.”

The district placed this project and most of its other major school construction projects under a seven-year-old “project labor agreement” negotiated with local building trade unions. Under a PLA, contractors must hire workers from local union hiring halls and pay into the union benefit funds; in exchange, the unions promise not to strike, and to maintain compliance with all labor and safety codes.

Nonunion contractors have fought against PLAs, claiming the agreements freeze them out of lucrative public works contracts requiring them to pay into special funds jointly administered by union and contractor officials. These payments are in addition to any benefits they already offer employees. They are using this audit as ammunition in their campaign to halt the spread of PLAs; the campaign might include one or more local ballot measures in 2012 banning such future agreements.

“This audit shows that contractors in a project labor agreement don’t meet any of their promises any better than contractors on a non-PLA project and may even be worse,” Chase said.

A spokeswoman with the facilities division of the school district said the agency could not comment on the audit or any steps it had taken to address the audit’s findings because “this matter appears to involve third-party legal issues on which we will not comment.”

Spokeswoman Shannon Haber said the third party was “another entity” besides the general contractor, but declined to comment further.

Slawson of the Building Trades Council, which has signed most project labor agreements in its jurisdiction including this LAUSD agreement, said violations cited in the audit appeared to be minimal and below the level that would bring substantial sanctions from state regulators.

Slawson also attacked the nonunion contractors who called for the audit, represented by Associated Builders and Contractors. He said their contractors are routinely cited for a disproportionate amount of labor code violations.

“The ABC should be monitoring its own affiliated contractors,” he said. “They look like they are the chronic wage and hour violators in California.”

The audit, conducted by San Mateo-based Contractor and Compliance Monitoring Inc., focused on Valley Region High School No. 5, a 218,000-square-foot school in San Fernando that is expected to open in September and serve more than 2,000 students. The nonunion contractors chose the school for the audit because they see it as a typical large project.

Contractor and Compliance Monitoring found that 55 contractors working on the project had state or federal labor code violations.

The alleged violations include: underpayment of prevailing wages, failure to pay overtime or “premium pay” for work done on weekends and holidays, classifying workers as apprentices instead of higher-paid journeymen, failure to pay the required level of contributions to training programs, and failure to submit certified payrolls and benefit statements for each week worked on the project. Some contractors also submitted incomplete paperwork.

The audit was based on payroll records that were provided by the school district after a request under the state’s public records act.

Deborah Wilder, president of Contractor and Compliance Monitoring, said the audit showed underpayment of wages on the project totaled about $20,000. But that figure, she noted, represents only a small amount of the total violations; it does not include any misclassifications of workers or pay that was not documented because paperwork was incomplete or missing.

Kevin Korenthal, executive director of Associated Builders and Contractors’ California committee, said he believes that the total amount of unpaid wages and benefits on the project will end up being in the low hundreds of thousands of dollars, not including potential penalty assessments by state agencies.

“These are major, major violations, especially the cases where workers were classified as apprentices instead of journeymen,” Korenthal said.

Wilder said this audit was typical of what her firm had found on other large contracts throughout the state, in both PLA and non-PLA construction. She said the number and degree of the labor code violations on this project were similar to the rates at projects without PLAs.

“It doesn’t matter whether the project is under a PLA or is an open-shop contract, the level of violations appears to be about the same, and this audit is just another example of that,” said Wilder, an attorney at a firm that handles employment law.

She added that neither she nor her auditing firm has ever taken a position in the dispute between unions and nonunion contractors over PLAs.

“All I want to make sure is that everybody plays by the same rules,” she said.

What stood out most in this audit, Wilder said, was the failure of the Los Angeles Unified School District’s own contract compliance monitoring program to ferret out these labor code violations.

“That’s their job and it appears, for whatever reason, they didn’t do that job effectively,” she said. “The violation rates were very similar to what I’ve found on projects without any labor compliance monitoring program.”

On other projects where public agency labor compliance monitoring programs have failed to catch labor code violations, Wilder said some agencies lacked the resources to monitor effectively, while others left the task to unions.

District facilities spokeswoman Haber said the agency could not comment.

Part of the responsibility for ensuring compliance with all applicable labor laws and safety codes also falls on the general contractor, which for this project is Turner Construction, a company with global operations and more than $8 billion in revenues last year.

Turner acknowledged that about a dozen of its contractors were asked to address issues relating to labor laws. But the company said those issues were not significant.

“These issues were often found to be either data entry issues or other minor issues that were resolved in subsequent payroll periods,” the statement said.

Nonunion contractors said the project labor agreement itself is a major reason for the high number of violations at this project, since it limits competition.

“PLAs lock out more than 80 percent of the total work force that’s nonunion,” said Bart Hacker, president of the Los Angeles and Ventura chapter of Associated Builders and Contractors of California. “If you had more companies bidding on these contracts, there would be much more incentive for the winning bidders to be responsible contractors, since they could be more easily replaced.”

Hacker and other nonunion contractors are considering the launch of a campaign to ban additional project labor agreements in one or more cities in Los Angeles County. Palmdale’s water board voted to ban PLAs last week. Earlier this year, voters in Oceanside and Chula Vista approved bans on PLAs in those cities; this week, voters in San Diego County face a similar choice.

“Audits like this take away one of the points unions use to sell PLAs, that they have better safety and compliance records than projects without PLAs,” said Don Briscoe, president of Bergelectric Corp., a nonunion electrical contractor based in Los Angeles.