11/9/2010 - An investigation prompted by whistle-blowers within Los Angeles Unified's school construction program found a series of irregularities in awarding $65 million in contracts, including authorizing work that exceeded pre-approved amounts by nearly 50 percent.

A confidential report by LAUSD's interim inspector general found the district's Facilities Department increased the $65 million in construction management contracts by $31 million without getting school board approval; failed to slash total costs of new contracts by 20 percent as promised to save money; and hired subcontractors to do work after being specifically told not to do so.

The 54-page report obtained by the Daily News was expected to be discussed today by the school board in a closed-door meeting.

"We began receiving first anonymous calls from individuals within facilities and later calls from people who identified themselves alleging concerns about serious improprieties occurring in the contracting process around the construction management contracts that were being awarded," Interim Inspector General Jess Womack wrote in the report.

Womack, whose office serves as a watchdog for the district, did not return phone calls Monday.

Chief Facilities Executive James Sohn, who was referred to in the report, defended his department, saying the report contained inaccuracies.

For example, Sohn said the report says the facilities department began correcting the problems only after issues were raised by the Inspector General's Office.

Sohn, though, said he began correcting the errors when his office discovered them, prior to any contact with Womack.

He also said complaints have come from disgruntled employees who have been let go because of the economic crisis.

"The facilities department has been reduced from a peak of over 2,000 employees in 2008, to an expected 800 or 900 employees by January of next year," Sohn said Monday.

"Many grievances and many, many comments and issues have been raised, both internally and externally, by persons who for 10 years or more, have benefited from the bond program."

Investigators were looking specifically at "allegations of impropriety and misrepresentation" in the facilities department's awarding of 38 construction management contracts, approved in February 2010, the report states.

They looked only at the $65 million in construction management contracts, a tiny fraction of the district's $20 billion school construction program.

Still, questions about how the officials have spent the voter-approved bond money have plagued the school district for years. Internal district investigations have found several cases of lax oversight in the hiring of consultants, pointing to conflict-of-interest abuses.

The district specifically banned the use of sub-contractors in awarding the $65 million in contracts because "middle men were not supposed to receive a benefit," Womack said in the report.

The contracts were used to retain construction management firms that worked on new schools for the district's modernization and retrofitting projects.

District investigators found that facilities officials failed to follow their own rules in many cases.

For example, facilities executives negotiated 22 construction management contracts in one day, when the standard process is to send contracts to the district's contract unit, which normally negotiates the contracts over a longer period of time.

Facilities officials also approved more than $9 million in "lump sum" task orders, which are work orders usually reserved for smaller jobs since they lack the description and detail of a typical work order.

Among the 11 approved "lump sum" task orders, was a contract for $3.7 million to a subcontracting firm run by four consultants that have a "long history with the district," the report said.

Womack wrote that hiring the sub-contractors was at odds with a district policy that banned the use of sub-contractors as a way to ensure that more small businesses had access to building projects.

The contract also raises concerns about perceived conflict of interests.

Elevated to Chief Facilities Executive this summer after the departure of former building chief Guy Mehula, Sohn said the lump sum task orders save the district money. He also assured that Consilia was given the work because they had the best proposal.

Womack's report also said facilities executives promised to cut construction manager contracts by 20 percent to save the district money. But the report found that after initially enforcing the reduction, facilities staff reversed the cuts by shuffling contracts around and allowing consultants to add back the cuts through change orders.

LAUSD Superintendent Ramon Cortines came to the defense of the facilities department, saying he saw nothing egregious in their handling of the contracts and have taken steps to correct problems.

"There are no serious improprieties," Cortines said.

"I feel (Sohn) has been open and there is so much transparency now within the facilities department," he added.

●●smf's 2¢: I respectfully beg to differ with the superintendent.

The allegations are of bond money poorly accounted for; while maybe not malfeasance it may be misfeasance.   I am on the bond oversight committee and I have not seen the report  (which in itself speaks to all this transparency) but I have seen the cover letter of the report (follows) and it implies what I would characterize as "serious improprieties", apparently developed and described in greater detail within the report itself.

If Mr. Cortines is happy with this sorry state of affairs I am unhappier still.

Superintendent Cortines: "I feel (Sohn) has been open and there is so much transparency now within the facilities department," he added.

Putting my glib/sarcastic hat on I wonder just how far apart the superintendent's fingers were when he said "….so much…"?  There is an implied tone in the response that things are more transparent now then they have been in the past – as in when previous Chief Facilities Executives reported to this and previous superintendents, school boards, oversight committees and the voters & taxpayers. 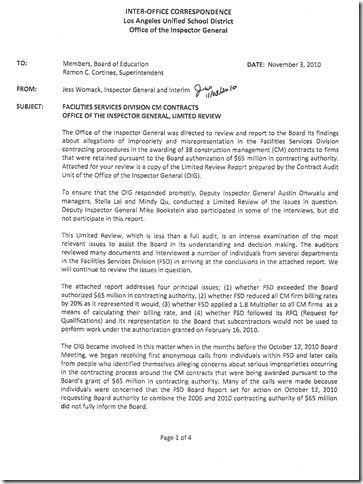 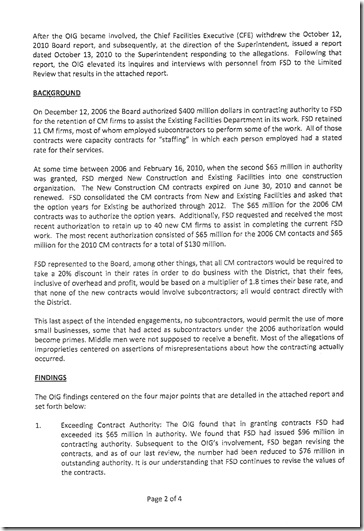 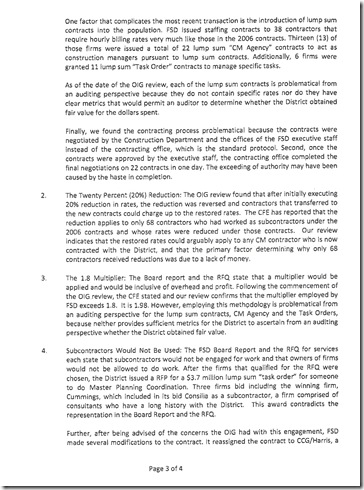 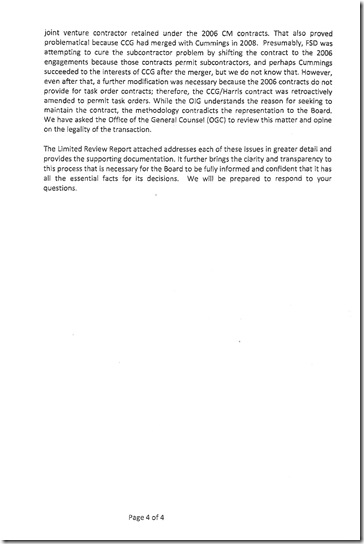