Nov. 10, 2010 - LOS ANGELES — Colleagues of Rigoberto Ruelas were alarmed when he failed to show up for work one day in September. They described him as a devoted teacher who tutored students before school, stayed with them after and, on weekends, took students from his South Los Angeles elementary school to the beach. 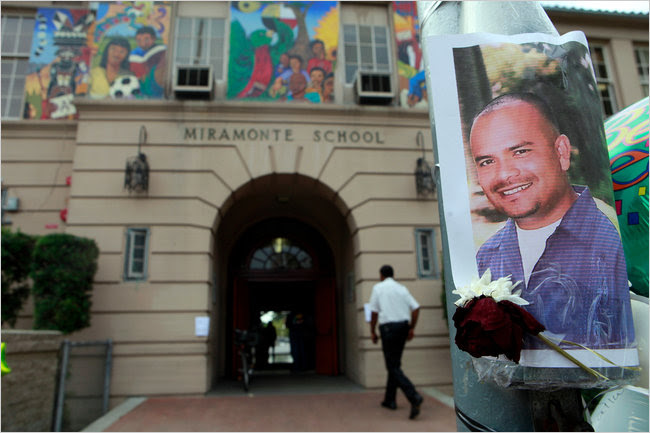 Damian Dovarganes/Associated Press - A tribute in September to Rigoberto Ruela3, who taught at Miramonte in South Los Angeles.

When his body was found in a ravine in the Angeles National Forest, and the coroner ruled it a suicide, Mr. Ruelas’s death became a flash point, drawing the city’s largest newspaper into the middle of the debate over reforming the nation’s second-largest school district.

When The Los Angeles Times released a database of “value-added analysis” of every teacher in the Los Angeles Unified School District in August, Mr. Ruelas was rated “less effective than average.” Colleagues said he became noticeably depressed, and family members have guessed that the rating contributed to his death.

On Monday, a couple hundred people marched to the Los Angeles Times building, where they waved signs and chanted, demanding that the newspaper remove Mr. Ruelas’s name from the online database.

“Who got the ‘F’? L.A. Times,” chanted the crowd, which was made up mostly of students, teachers and parents from Miramonte Elementary School, where Mr. Ruelas taught fifth grade.

The value-added assessments of teachers — which use improvements in student test scores to evaluate teacher effectiveness — has grown in popularity across the country with support from the federal Department of Education, which has tied teacher evaluations to the Race to the Top state-grant program.

But their use remains controversial. Teachers’ unions argue that the method is unfair and incomplete and have fought its implementation across the country.

A. J. Duffy, president of the union, United Teachers Los Angeles, which helped organize Monday’s event, held up Mr. Ruelas as an example of the problems with value-added assessments.

“Value-added assessments are a flawed system,” Mr. Duffy said. “This was a great teacher who gave a lot to the community.”

The newspaper has refrained from commenting on the issue beyond a statement issued after Mr. Ruelas’s death: “The Times continues to extend our sympathy to Mr. Ruelas’s family, students, friends and colleagues. The Times published the database, which is based on seven years of state test scores in the L.A.U.S.D. schools, because it bears directly on the performance of public employees who provide an important service, and in the belief that parents and the public have a right to judge the data for themselves.”

Teachers’ unions have largely opposed moves away from the tenure system, in which layoffs are based on seniority, not performance.

Recently, in Washington, where the school chancellor, Michelle Rhee, used comprehensive teacher evaluations to fire hundreds of “ineffective” teachers, their unions poured hundreds of thousands of dollars into a campaign to unseat her main supporter, Mayor Adrian M. Fenty. Mr. Fenty lost the Democratic primary in September, and Ms. Rhee resigned the next month.

Despite opposition from the teachers union, Education Secretary Arne Duncan came out in support of greater transparency in teacher evaluations, and the New York City Department of Education is also preparing to release data reports on its teachers, pending the result of a court hearing later this month.

In Los Angeles, where the school district has moved toward significant reforms, like handing control of some chronically low-performing campuses to charter school operators, members of the school board have increasingly pushed to implement value-added assessments.

“Not including value-added measures is not acceptable,” said Yolie Flores, a board member of the Los Angeles Unified School District. “But it also has to be part of a more comprehensive system of evaluation.”

Eric A. Hanushek, a senior fellow at Stanford’s Hoover Institution who studies school accountability systems, said the value-added assessments should be combined with other factors. But he said the tenure system did not offer any meaningful evaluation of teacher performance.

“Now that The L.A. Times has published these scores, I think the genie is out of the bottle, and parents are going to want this information,” Mr. Hanushek said. “I presume the union’s opposition is a last effort of the teachers’ union to say that you should never evaluate teachers. This is their attempt to take a tragic situation and turn it into one that they can use for their own political advantage.”

But Randi Weingarten, president of the American Federation of Teachers, argued that reliance on value-added assessments actually hindered efforts to carry out comprehensive teacher evaluations.

A couple hundred people gathered outside of the L.A. Times building in honor of Ruelas, a former elementary school teacher. They marched all the way from the Los Angeles Unified School District headquarters for a candlelight vigil Monday night.

Ruelas was a fifth-grade teacher at Miramonte Elementary School. In September he took his own life after the Times posted teacher ratings ranking Ruelas as less effective. The Times published that story based on a database that it said was based on seven years of state test scores in LAUSD schools.

Those who took to the streets Monday said the rankings are unfair, that Ruelas added value to his students and their parents' lives in many ways.

There has been great debate over how to assess a teacher's effectiveness in the classroom. Some of Monday's protesters say that the publishing of the database has created great concern for the teaching community. Ruelas's family says that he was unfairly targeted.

"It's like if somebody will go to anybody's house and say you are not a good parent," said Alejandro Ruelas, Rigoberto's brother. "They just shamed him without any real facts. They just came out and felt they had a story and that's it."

"I think that Rigo represents a lot of the stresses that many of us go through in the classrooms and it's unfortunate that people are only allowed to see one aspect of teaching," said teacher Denise Gomez.

Many of Monday's protesters were students, teachers and family members.

The L.A. Times released a statement: "The Times continues to extend our sympathy to Mr. Ruelas' family, students, friends and colleagues.

"The Times published the database, which is based on seven years of state test scores in the LAUSD schools, because it bears directly on the performance of public employees who provide an important service, and in the belief that parents and the public have a right to judge the data for themselves."

Ruelas's brother is asking that the L.A. Times remove Rigoberto's name from the database, but at this point they still have him listed as an ineffective teacher.

My heart goes out to the family, friends, and students of Rigoberto
Ruelas. Here was an excellent teacher who cared not only for his
students but for the community. What
a shame that he was evaluated by such
a narrow, flawed, inferior method.
The Times not only published the scores but labeled the teachers as
being effective to ineffective. In
my opinion they are not authorized
or qualified to make such judgements. How many people have thought about what does make a good teacher. May I recommend
Diane Ravitch's book, the Death
and Life of the Great American School System. In it she does
explore what goes into making a good teacher and a good school.