LAWSUIT IN THE WORKS? :: DISTRICT EXPELS PEARSON FROM APPLE/PEARSON/LAUSD ‘iPADS FOR ALL’ CONTRACT: “APPLE AND PEARSON PROMISED A STATE-OF-THE-ART SOLUTION, THEY HAVE YET TO DELIVER IT” Los Angeles Unified may be headed toward a show down with Apple Inc. over the software installed for a controversial iPads program. flickingerbrad via flickr

4/15/2015  ::  Los Angeles Unified told Apple Inc. this week that it will not spend another dollar on the Pearson software installed on its iPads and is seeking a multimillion-dollar refund from the technology giant.

If an agreement cannot be reached, the nation's second-largest school district could take Apple to court.

"While Apple and Pearson promised a state-of-the-art technological solution for ITI implementation, they have yet to deliver it," David Holmquist, the school district's attorney, wrote in a letter to Apple's general counsel. The ITI, or Instructional Technology Initiative, is the district's name for its iPad program.

Holmquist said the district is "extremely dissatisfied" with the work of Pearson on its technology initiative to get computers into the hands of each of the district's 650,000 students.

"As we approach the end of the school year, the vast majority of students are still unable to access the Pearson curriculum on iPads," he wrote.

L.A. Unified's $1.3 billion iPad program has been fraught with problems, from issues getting the technology to work in the classrooms to questions about how the tablets were procured.

The FBI launched an investigation into the purchase in December, carting out 20 boxes from the district office on bidding material, communications and other records involving Apple and Pearson.

District officials purchased Pearson's software even though it was unfinished, and teachers complained the material seemed rushed: lessons were missing math problems and reading material and included errors. The software also lacked many interactive elements that were promised, teachers said.

“[Pearson] missed the whole point of technology — individualized  instruction, all the material in the palm of your hand," said Ben Way, a math teacher at Alliance Cindy & Bill Simon Technology Academy, a charter school that also purchased Pearson's iPad app.

Pearson and Apple executives could not be immediately reached for comment, but Pearson representatives maintain they have held up their end of the deal.

"The course content has been complete for over a year," wrote then-Pearson spokesman Brandon Pinette in an email to KPCC in September. "Yes, there are important enhancements to add as there always will be. We will add twice a year. No digital product should ever be considered complete."

The LAUSD is asking Apple to stop installing Pearson Education Inc. learning materials on iPads that the district has ordered, according to a letter from the school district to the technology giant. In this 2013 file photo, Valley Academy of Arts & Sciences teacher Judith Quinones helps students Omar Coria and Diana Jimenez with a lesson on the iPad. (File photo by Michael Owen Baker/Los Angeles Daily News)

Posted: 04/15/15, 2:23 PM PDT |  LOS ANGELES — The Los Angeles Unified School District is telling Apple it is dissatisfied with the Pearson Education Inc. curriculum delivered on student iPads and wants to be reimbursed for all the learning materials schools haven’t been able to use.

In a letter to Apple Monday, LA Unified’s general counsel orders Apple to end Pearson products and services under contract as soon as possible.

The Associated Press asked Pearson for comment by email Wednesday.

Apple subcontracted with Pearson under the district’s technology initiative to transition schools to the new Common Core academic standards and provide every student with an iPad or other device. 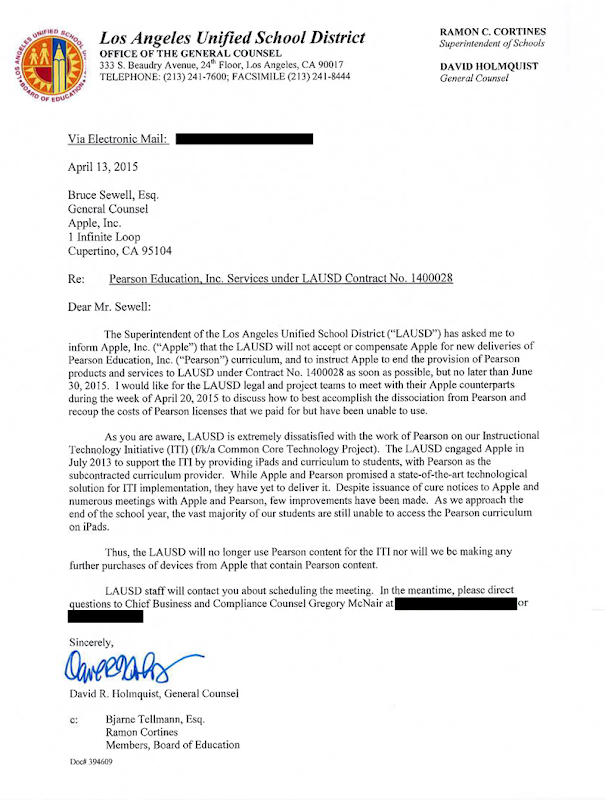