FROM THE REPORT: “Overall, respondents indicated the greatest need for professional development for staff related to technology. A high need for headphones, laptops, and tablets was also identified. Less need was identified for bandwidth, keyboards, and printers.”

October 10th, 2013  ::  A majority of the school districts and charter schools responding to a state survey indicated they’ve got the technology to offer computer-based testing for the new Common Core standards. But the one-third to 40 percent of districts that said they have only some or little confidence they can pull it off could signal trouble complying with a new state law requiring all districts to give the Common Core math or English language arts field test six months from now.

That testing requirement, stipulated under the recently signed Assembly Bill 484 – which says that the field, or practice, test be given instead of state tests required under federal law – is also putting the state in conflict with U.S. Secretary of Education Arne Duncan.

The number of districts and charter schools not capable of giving the Common Core tests could be larger, since only about two-thirds of districts responded to the state survey, which was taken between June and September. However, the charters and districts that responded enroll 87 percent of the state’s students and include the 25 largest districts, the state Department of Education said in a memo released Wednesday. And seven out of eight districts also indicated they plan to use some of the one-time money they’re receiving for Common Core implementation to fill in gaps in technology necessary to offer the online tests. The Legislature approved $1.25 billion for Common Core and left it to districts to decide how to spend their share of it over the next two years.

The field test next spring is intended to help a federally funded state collaborative creating the assessment, called the Smarter Balanced Assessment Consortium, choose the test questions and determine the preliminary grading scale for the official Common Core tests. Those tests will be first given to the two dozen states in the consortium, including California, in spring 2015. Districts that can’t administer the assessments by computer will be able to give the paper-and-pencil version for up to three years.

The field tests will afford districts a run-through on giving computer-based assessments, so that they can work out technical kinks a year ahead of time. Teachers will see the kinds of questions that will be on the formal test.

Results from the survey indicate that the biggest hurdle many districts anticipate is human, not technological. While 70 percent of respondents expressed confidence they have the Internet bandwidth required and 58 percent said they have computers that meet the test specs, only 46 percent expressed complete or considerable confidence they have adequate support personnel to handle the testing and 20 percent expressed little confidence. Many districts cut back on tech support during the recession and remain understaffed. Most districts acknowledged they need additional peripheral equipment, such as headsets and keyboards.

“The big takeaway for us, affirming what we’ve been hearing in conversations with districts, is the issue about having staff on the ground,” said Deb Sigman, deputy state superintendent of public instruction and a member of the Smarter Balanced executive committee. “We’re worried that districts have had cutbacks.”

Sigman said that, in response to the survey, the Department of Education plans to use savings from not administering state assessments to start a help desk for districts’ testing issues and will offer more training for district personnel. The department will bring a plan to the State Board of Education at its meeting next month.

The survey didn’t deal with the question of whether students, particularly in elementary school, will be competent enough to take a computer-based test. They will need keyboarding skills and familiarity with computers for the tests to accurately reflect their knowledge of Common Core standards.

The field test will be given between early March and early June 2014. Two-thirds of the 880 districts and charter schools expressed solid confidence in their ability to give the test during that 12-week window, and only 8 percent had little confidence they could meet the deadline. But that time frame may shrink considerably a year later, when the actual test is first given. A standard test period is five weeks, to preserve test security and to reduce advantages to districts that give the test after additional weeks of instruction. But a tighter window would pose additional equipment and capacity challenges for some schools and districts.

The Smarter Balanced tests will be given to all students in grades 3 through 8 and grade 11.

AB 484 mandates that districts offer either the math or English language arts Common Core field test – not both – to all students. Sigman said that the survey results validated the Legislature’s judgment not to overstress districts by requiring that both field tests be given. But that decision also put the state at odds with Duncan. He had indicated a willingness to grant states a one-year waiver from federal testing requirements if each student took both the English language arts and math tests. Duncan could fine the state $16.5 million – 1 percent of Title I money coming to California used to operate the state Department of Education – or potentially more for being out of compliance. 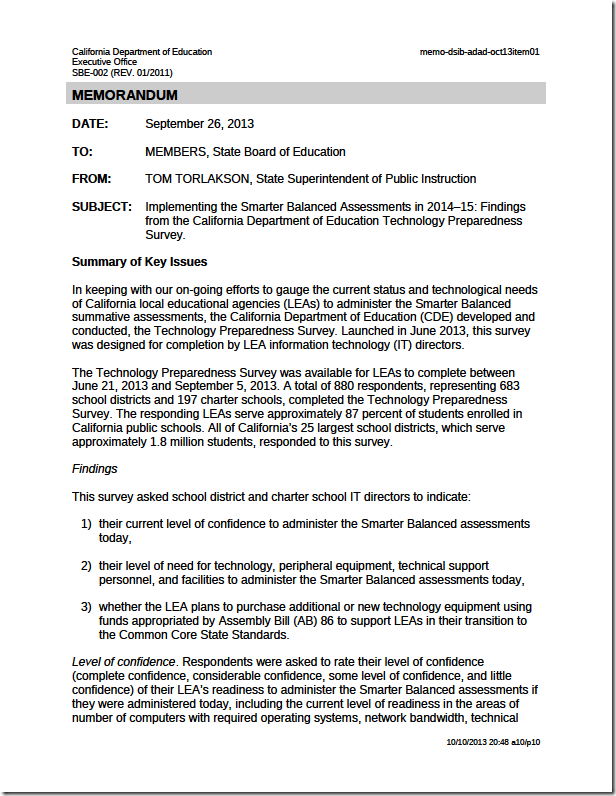 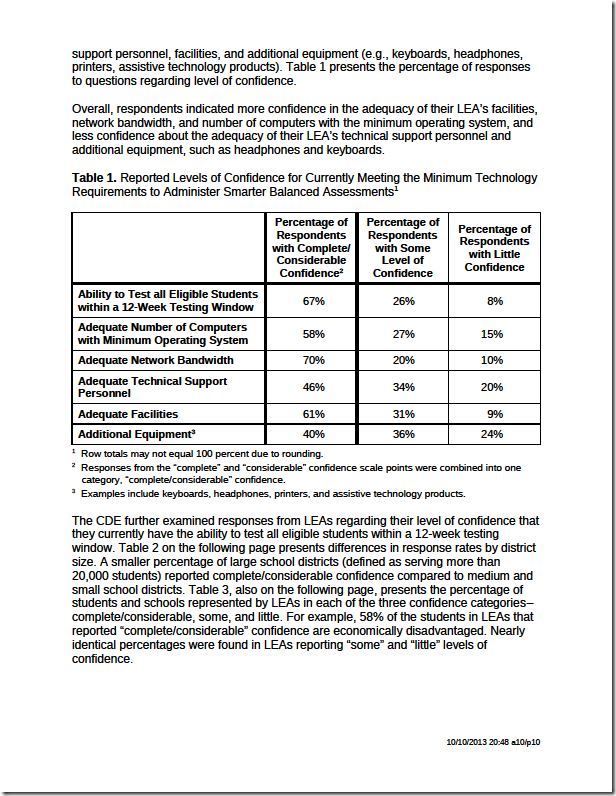 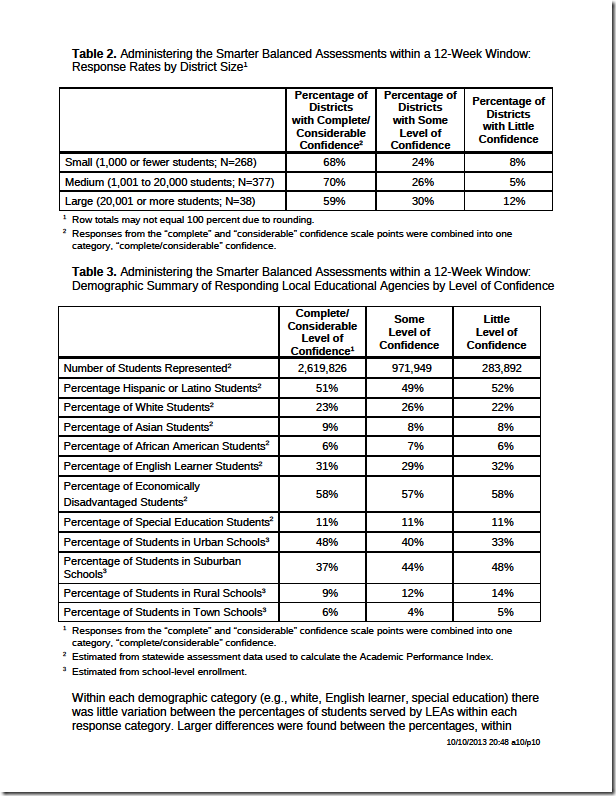 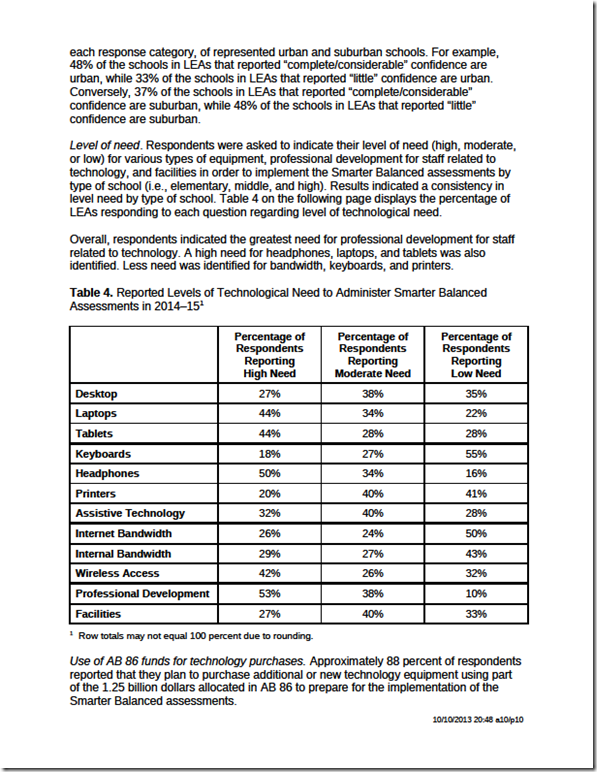