KEEP CALM, BE COURAGEOUS AND CARRY ON!

“Dr. Deasy, we would like to advise you that administrators can only remain calm, be courageous and carry on if they are given the tools necessary to carry out your strategic plan.”

Aug 15, 2013  ::  Administrators attended the Superintendent’s administrators’ meeting on Thursday, August 8, 2013, at Hollywood High School. As always, the student performances were uplifting, heartwarming and a source of pride for all who witnessed them. Board President, Dr. Richard Vladovic, Mayor Eric Garcetti, Board Member Steve Zimmer and two students gave speeches reflecting hope and camaraderie and expressing gratitude to those in the field, administrators and teachers. 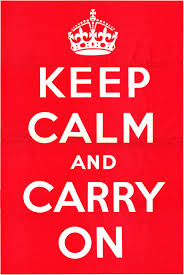 It was an invigorating morning, full of anticipation and a combined sense of purpose. Superintendent John Deasy made an optimistic speech in which he several times exhorted administrators to remain calm and have courage. He acknowledged that while this new school year may seem daunting and overwhelming, he had faith in the courageous, hardworking administrators in the room because “together, we can accomplish remarkable things.”

<< The famous Keep Calm and Carry On Poster was printed by the British government in the dark period of WWII following the Dunkirk defeat in anticipation of German invasion (“We will fight them on the beaches..,” etc.)  It was never actually issued   – probably because it didn't align all that well with the Churchillian “We will never, NEVER, NEVER surrender!” …and only became famous years after the war.  4LAKids believes the definitive definition of  “Courage” in this context  comes from Bert Lahr’s portrayal of the Cowardly Lion on The Wizard of Oz.

While we appreciate Dr. Deasy saying that LAUSD is best in the West and first in the nation, we need for him to realize that all of the stroking in the world cannot make up for the lack of feet on the ground and resources in District schools. Administrative teams and teaching staffs have been markedly reduced over the last five years, as well as, the clerical, cafeteria and custodial staffs; not to mention support personnel, like PSA counselors, grade level counselors, school psychologists, school librarians and myriad M & O employees who used to come to the rescue when there was a plant problem that could not be resolved on-site. Administrators are starting the school year with a multitude of new initiatives to implement, a new curriculum, a new funding format, a new teacher evaluation system, more professional development that takes time away from the school and an increased stress level.

As such, Dr. Deasy, we would like to advise you that administrators can only remain calm, be courageous and carry on if they are given the tools necessary to carry out your strategic plan. We cannot recall a time when the District has introduced four major new initiatives in one school year, with each requiring hours of training, professional development and preparation. The Superintendent even admitted in his speech that the four initiativesCommon Core Curriculum, NCLB waiver implementation (with new accountability measures), new Smarter Balanced assessments and the Local Control Funding Formulawere formidable and fraught with consequences. More than 100 elementary schools only have one administrator and one office assistant and 47 schools will be responsible for tracking and utilizing $30 million worth of iPads. In addition, even as he tells the new administrators that he has your back and to call on us so we can support you, we at AALA know that most administrators hesitate to call due to the “gotcha mentality” that was rampant last year. So, dealing with all of the above, how can administrators be expected to keep calm?

Principals have been directed to evaluate their teaching staff using a methodology and platform which necessitates 5 to 10 hours of follow-up after an observation; they will again have to respond to a multitude of requests for information from the central office and the ESCs during the first two months of the school year; they will receive guidance and direction, not only from their director, but also from the operations administrators and parent engagement staff; and, they have no additional staff to implement the four major new initiatives. AALA knows that its members can really only remain calm, be courageous and carry on when District leadership follows AALA’s suggestions and priorities (Update, August 5, 2013):