Aug 23, 2013 :: UTLA’s online survey on Common Core preparation finds most teachers do not feel prepared to teach Common Core State Standards, and an overwhelming majority said more planning time and more time to collaborate with colleagues would be the most useful for helping prepare.

During the three days the survey was available online, 4,462 UTLA members completed it. Only 1,000 of those 4,462 have received more than three days of professional development on Common Core. 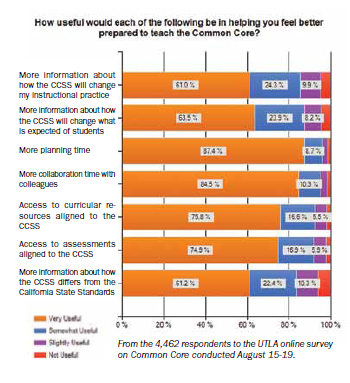 Among other results of the survey: • In ranking what already has been most useful in preparing for CCSS, teachers said the most useful resource has been the teachers and administrators at their school. The next highest in usefulness were materials produced by the State Department of Education and professional associations.

• In rating how ready they are to teach CCSS to different student populations, teachers feel most concerned about being prepared to teach students with disabilities.

• Overall, teachers think their school has done more to prepare for Common Core than the District or the state.

LAUSD is getting $113 million over two years from the state to implement Common Core. Superintendent John Deasy is calling for $44 million to be used to create 200 out of- classroom positions to oversee implementation.

(The positions come with those bureaucrat-speak names that LAUSD seems to specialize in, such as an “Organization Change Management Position,” which would be paid $160,000 a year.)

UTLA President Warren Fletcher presented the survey results to the School Board at its August 20 meeting, urging the District to listen to teachers when it comes to this challenging transition.

“Instead of hiring a new cadre of bureaucrats, the wiser course is to provide paid training days at each teacher’s full rate for LAUSD teachers to work together,” UTLA President Warren Fletcher says. “For the first time in a long time, meaningful funds are coming to the District for professional development, and we need to get this right.”

The Common Core funding can only be used on professional development, materials, and technology (in other words, it can’t be used to lower class size or raise employee pay). The funding lasts only two years, which means that if Deasy is allowed to create a new Common Core bureaucracy, funding for those positions would become a drain on the general fund once the money dries up.

“When general classroom funds have to cover out of- classroom positions, class sizes go up,” Fletcher says. “Deasy’s plan is a Trojan horse for new class-size increases in 2015-16.”

The School Board will vote on the Common Core implementation budget at its next meeting.

The UTLA survey was not designed to measure dissatisfaction with larger Common Core issues. As CCSS is being rushed into classrooms in nearly every district in the country, teachers continue to air serious and substantive concerns with what is being called the “next big thing” in education reform.

“Professional educators know that the Common Core standards are not a panacea,” Fletcher says. “But despite that, we will continue to advocate for what we need to do best by our students.”

DIDN’T GET A CHANCE TO COMPLETE THE SURVEY? It has been reopened and will be accessible until September 5. CLICK HERE