PRINCIPAL OF NEW CARSON HIGH SCHOOL HAS NO STUDENTS - YET

09/25/2010  -- After four years at her beloved but crowded Wilmington Middle School, Principal Veronica Aragon found herself with a new assignment last month at a decidedly different kind of campus.

There are no desks, no books and no teachers. And instead of students, Aragon's school is crawling with nearly 200 construction workers.

That's because she is the interim principal of a Los Angeles Unified campus that is still being built.

Officially known as South Region High School No. 4, the nearly $181 million campus is set to take in about 1,800 students from Carson and Banning high schools.

Located in Long Beach, just over the Carson border and next to Dominguez Park, the new school will open in September 2011.

Construction began about two years ago.

This week, on a tour of the busy construction site, Aragon was wowed by the school's massive multipurpose room, bright library and tidy computer-server room. 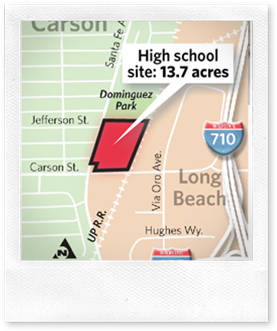 Looking at the principal's private office, which was filled with natural light, Aragon joked, "Hopefully I really get the job!"

This fall, Aragon is leading a team of teachers, parents and local residents who are drafting a plan to keep the school under the aegis of LAUSD.

The campus is up for bid by outside operators under the district's closely watched, year-old Public School Choice process. Three charter school groups have signaled their desire to run the campus.

Local district officials say Aragon's team has an advantage over the competition.

"We know the needs of the community like the back of our hand," said Michael Romero, superintendent of Gardena-based Local District 8. "There's a great sense of energy and a sense of passion with this work."

Romero is overseeing Aragon's work with the design team. Their plan must be submitted to the district by Dec. 1, and the Board of Education will later vote on which group gets to control the school.

Other potential bidders include ICEF Public Schools, which runs 15 charter campuses, mostly in South Los Angeles; Magnolia Schools, operator of a charter middle school in Carson and 12 other schools in Southern California; and MATTIE Academy School of Change, run by a group that operated a short-lived charter in Long Beach. A teacher from a downtown Los Angeles school has also submitted a letter of intent to apply for the school.

Last year, when Gardena High and San Pedro High went through Public School Choice, they were among three schools - out of a total of 30 - that received no outside bidders.

With the new Carson-area school, it's easy to see why charter management organizations are interested. The four-story campus, which looks a bit more

A worker uses a lift to work on the ceiling of what will be the library at the under construction South Region High School No. 4 in Long Beach. (Steve McCrank / Staff Photographer)

like an office structure than a high school, will house 67 classrooms. The giant multipurpose room looks set to host grand dramatic productions, and the turf football field and bleachers are expected to be completed in coming weeks.

It will be just the second campus to be completed in the South Bay under LAUSD's massive $20 billion new-school construction program.

In Khachatourian's construction trailer at the dusty site, a digital clock counts down the days, hours, minutes and seconds until the school will open.

Aragon, who was widely praised as the leader of Wilmington Middle School, learned at the end of the last school year that she would be interim principal of the campus. She said she worried initially about the uncertainty - not knowing if LAUSD would retain control of the school and if she would end up having a job at the campus next year.

But planning a new secondary school from the ground up - without all the "fumbling" that educational reforms can encounter at existing schools - has been a welcome challenge, she said.

"Everything's a clean slate. We can start with the highest expectations," Aragon said.

She has been doing research on programs at other schools, looking particularly at project-based learning models and collaboration.

The new school is designed with the district's "small learning communities" initiative in mind. The campus will be physically divided into four themed academies - color-coded red, blue, green and gold - helping to make the academic setting more intimate and welcoming.

Aragon and her team, which began weekly Monday afternoon meetings this month, are considering a ninth-grade academy similar to one instituted this year by troubled Gardena High.

They're dreaming about academic achievements that far outpace most LAUSD public schools in the South Bay.

Teachers who want to transfer to the new school will be selected based on seniority, per the district contract with United Teachers Los Angeles.

So Aragon is trying to make very clear - before the school is deluged with transfer requests - that expectations of instructors will be high. The design team wants teachers who embrace collaborative learning, and those who want to learn from each other.

Alma Shahabi, an 11-year teaching veteran of Carson High who is on the design team, said there is a lot of buzz among her colleagues about who will end up at the campus. The team, she said, wants to attract "like-minded educators" who think seriously about the commitment to a new school.

"Part of it will be: I have the seniority to go, but do I believe in the curriculum and the instructional philosophy there?" Shahabi said.

For parents of children at neighboring Dominguez Elementary School, the biggest change will be the chance to send their child to what will truly be a neighborhood school.

"We have a lot of parents that are very concerned about the high school. They want it to be a good school, and that their children from this area are able to go to the school," said Nancy Duenez, a design team member and mother of two children at Dominguez Elementary and one at Carnegie Middle School.

She wants to ensure the new campus is imbued with Carson pride. The district, she said, could do a better job of engaging local residents and parents in planning the still-unnamed school. And community members, Duenez said, could stand to pay closer attention to the new campus.

"Everybody can be on the same page and make sure we work together," she said.

Shahabi, who works as an intervention and testing coordinator at Carson, said the chance to "set the tone" for the school and draw up plans from scratch is "every educator's dream."

"I think the community deserves this," Shahabi said.

As it turns out, Arragon was made director of LD8 HS s at the last hour. So typical of LAUSD. I know the lady did her work to do the school justice, but I am not convinced she has been honest in the matter of school choice. This school is taking advantage of the eclectic economic mix in Carson, Long Beach area as well as CSUDH's programs and generosity. By isolating the residents of more middle class pockets in that area, zoning is giving the new school an advantage as more fluent English, different socioeconomic status and parental involvement will be present.
I don't believe the district was very honest about contenders for control of this school. Reorts state only a dodgy charter company showed interest byut it is clear a group of teachers were prepared to make a bid too.
Ld8 is probably the most unethical and incompetent ld in Lausd. Arrogan, Lopez( Banning) and Warren ( Carson) are well known for their ambition, questionable comportment in matters of teacher & student discipline and the unchecked abuses of resources, authority and process.
I am sure Arragon was disappointed about losing her little kingdom to the lemon dance of school administrators. Director is not such a great job,
One answers to moronic leadership, covers for dictators in school administration and are expected to railroad teachers accused of wrong doing, yet never investigated properly and wantonly deprived of due process. Eventually transgressions will get them in hot water even if they did follow directiives. Asks Juan Flexha. He'll probably lie as the habit is reflexive.
Either way, the system is broken and it's time to stop blaming teachers and scrutinize the folks in charge of them.