Hundreds knock on doors of dropouts

But no one came to the door and the high school counselor had to leave a letter urging the student - a dropout from Los Angeles Unified - or his parents to contact the district. Undaunted, Courtney prepared to visit the next student on her list.

"We need to make every effort to get these kids back," she said.

"A lot of the time we may not find them, but we connect with their family or their neighbors and they tell them we've been here. It helps put pressure."

Courtney and hundreds of other educators Friday joined city workers and community volunteers for Student Recovery Day, an effort to persuade LAUSD dropouts to return to school.

"It is extremely important that we respect our students enough to come to their homes and ask them to come back," Deputy Superintendent John Deasy said in between visits to homes in South Los Angeles.

According to the district, just 52 percent of all ninth-graders who enroll in high school will graduate four years later.

Since it was launched last October, Student Recovery Day has re-enrolled 415 students - just a fraction of the total dropouts. District officials could not say how many students were contacted or re-enrolled on Friday.

Still, school board member Steve Zimmer said each student rescued by the program he created represents a victory.

"All of this is about creating an absolute sea change in how we address the dropout issue and how we value all students," said Zimmer, who was a high school counselor before he was elected to the school board in 2009.

"We have to own up to the fact that one of the reasons so many students have left is because in the past there was the perception that we didn't want them or didn't notice they were gone."

Students were far from forgotten Friday as volunteers visited hundreds of homes across the district, including those in neighborhoods served by San Fernando, Sylmar and North Hollywood high schools.

Volunteers also contacted local businesses frequented by students and asked them to post fliers with messages encouraging teens to return to class.

Chronically truant students were even given a pass from law enforcement, who agreed to not ticket students who were found on the streets and instead to take them back to their local campus to re-enroll.

Some volunteers arrived at a home only to find that the student had moved out of the area, or even the country, without notifying the district.

Others learned that parents had enrolled their children in alternative schools, like Alicia Blas, whose son is attending a local charter school rather than North Hollywood High.

Still, Blas was pleasantly surprised at the district's outreach effort.

"This is definitely better than the automated calls they usually do" when students miss class, Blas said. "It's impressive to see so many people coming door-to-door to try and reach one kid." 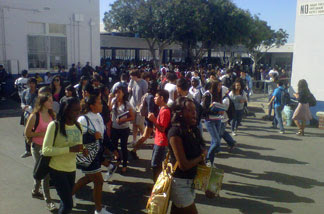 A break between classes at Venice High School. Volunteers gathered there for "Student Recovery Day." 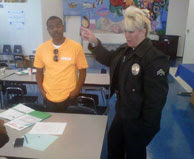 One 19-year-old student couldn’t stop beaming as she returned to Venice High School to re-enroll. The young lady, who preferred not to give her name, is five credits shy of graduating. Last school year, she got pregnant. After her son was born in April, she dropped out of Venice High.

“After I gave birth, you couldn’t go back to school for six weeks,” she said. “And that was really close to my graduation time. So I was just home most of the time, so I didn’t get to pass one of my classes.”

That class is government. And today, the young student who enjoyed playing varsity basketball for Venice High is back in school, ready to finish. Her return to class started with a knock at her door about a mile way from the school. She lives at the Mar Vista Gardens Housing Project in southwestern Los Angeles.

School district counselor Steve Blustajn paid a visit to the young mother’s home. Her brother lives there, too. He also dropped out of high school. Blustajn got them both to come back. Just one of a few successful visits he and others have made.

“Some of the parents were home. And their student or their child was home and we’d ask why are they out of school,” said Blustajn. “And for various reasons, we’d ask them to come back. Some had more severe issues than others and we were all able to deal with the issues they had as far as bringing them back.”

More than a thousand volunteers across L.A. canvassed the neighborhoods, alleys and businesses – just about anywhere they knew dropouts hang out. On Friday, they convinced dozens of students to re-enroll without punishment for behavior problems or missing school.

Thirty-three-year-old volunteer Antonio Washington was eager to give his time. A former dropout himself, he got his GED – and now he works as a mentor to young people in Los Angeles.

“It’s a great way of giving back, so I think if they would have had this when I was in school, I probably wouldn’t have dropped out,” said Washington. “Even though I’m successful now and made a man of myself, I just think that it’s a good way to start now.”

As part of last Friday’s “Student Recovery Day,” Washington talked to restaurants, stores and other businesses in Venice and asked them if they’d be willing to report truants. They said they would.

The effort, organized for a third time, is the brainchild of school board member Steve Zimmer. He says most dropouts would rather be in school.

After visiting 400 families, Zimmer and other volunteers at Venice High were able to re-enroll dozens of dropouts.

And that young mom, who’s only five credits away from graduation, is glad she’s back. She wants a career in criminal justice and is determined to get it.

About a quarter of L.A.’s high school students don’t graduate. But with this young mom and a few hundred more dropouts expected back in class today, the stats just got a little better