UCLA STUDY: “…CHARTERS WERE ACTING AS HAVENS FOR WHITE STUDENTS” - The reality is that charter schools have become the new private schools, albeit funded by taxpayers 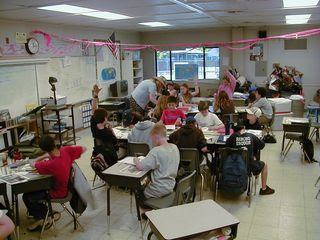 The Daily Quote is from Genevieve Siegel-Hawley, co-author of a study done by theUCLA School of Education's Civil Rights Project, the results of which were released seven months ago and showed that "the charter movement  [is] worsening racial, ethnic and class segregation in most of the country."

The study's results were referenced in an extensive report on charter schools, specifically in Butte County, written by reporter Leslie Layton and published yesterday in the Chico News Review.

The contrasts in class and culture at [Chapman Elementary School and Chico Country Day School] are at the heart of accusations that the charter movement contributes to segregation, and they’re at the heart of the charter-school divide in Chico. Throughout the Chico Unified School District, teachers and parents worry that charter schools are institutionalizing a two-tiered system by “skimming”—attracting students who are the best prepared and who have parents who can help in the classroom and in raising funds.

Interestingly, the article highlights the reality that charter schools have become the new private schools, albeit funded by taxpayers:

...Charter schools can disregard much of the state Education Code, sidestep union contracts and spend more of their funding any way they wish.

Most Chico charters promote a mission or philosophy attracting a particular demographic. A sophisticated parent can shop for a school that specializes in Montessori or Waldorf or sustainability. And it takes know-how; you won’t find any local agency offering a complete list of public-school options...

Charters sometimes seem flush with money...enough to offer electives, small classes and teacher training. It may be because they support tiny administrative structures and can more easily control teacher pay. Chico Country says its pay scale mirrors that of Chico Unified, but the average cost of a [Country Day] teacher, in salary and benefits, is ...$65,000 a year. CUSD—either because it has many older teachers and/or a superior benefits package—spends an average $20,000 more per teacher.