AN OPEN LETTER TO JOURNALIST PATT MORRISON REGARDING PUBLIC EDUCATON

Posted by Robert D. Skeels in The Solidaridad Blog

Friday, August 06, 2010 -- Not only do the teabaggers and the edreform crowd use the same right wing reactionary think tanks, they both cling stubbornly to the thoroughly discredited notion that markets benefit anyone outside the ownership class. That's why Whitney Tilson quotes AEI, Ben Austin quotes the Hoover Institution, and RiShawn Biddle writes for 'Reason' magazine. These, and the rest of Arne Duncan's most stalwart supporters are to public education as the teabaggers are to civil rights. Not that there isn't a ton of overlap between teabagger and edreform memberships in the first place. 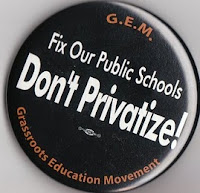 I want to invite Pat Morrison to discuss this issue with grassroots and volunteer public education activists, rather than just highly paid charter-voucher industry demagogues like Jed Wallace and Ben Austin. While I sincerely hope that Ms. Morrison has had to opportunity to read celebrated education professor and author Diane Ravitch's watershed book: The Death and Life of the Great American School System: How Testing and Choice Are Undermining Education, she would also do well by talking to public education advocates. I for one, and many of my fellow public education activists engaged in the struggle to preserve public education from privatization, would be happy to be interviewed, or consulted on this issue.

Many of us have spent years observing the real effects of privatization and other fallout of the so-called 'edreform' movement (I'm loathe to call anything funded by billionaires a movement). We've also watched hucksters like Wallace, Tuck, Barr, Ponce, Canada, Ressler, Christie, Smith, Piscal, Austin, Petruzzi, Burton, and McFarlane all get rich off the booming charter-voucher industry.

Over the years, Pat Morrison has tended to report from a progressive angle, and we all appreciate that. One wonders if she is aware that not only are these charter-voucher spokespersons she allows on her show in total agreement with institutions like The Heritage Foundation, The Hoover Institution, The Cato Institute, AEI, and other far right think tanks on these issues, but they frequently quote and use information from these reactionary organizations to forward their privatization agenda.

Those of us that advocate public education are in favor of fully funded, democratically run public schools, in which community, families, and faculty participate in the decision making for running schools. This is a far cry from the agenda of those private, secretive, unelected boards of EMO, CMO, and other charter-voucher institutions whose members are typically comprised of investment bankers, CEOs, businessmen, and hedge fund managers--none of whom have children in those schools, nor live in our communities. Rather than pit working class parents against working class unionized teachers, as Wallace and Austin do on a constant basis, we seek to unite both of those groups with the rest of the community and use our public schools as a focal point to forward the struggle for social justice, equality, and egalitarianism.

Please Ms. Morrison, give the social justice side of this debate a fair hearing. Businessmen like Austin and Wallace already have enough corporate media outlets for their antiquated and discredited ideas.

It is my belief that purposefully failed public education is the disease behind virtually every other problem progressive people are trying to deal with. Consciously failed public education is the orwellian inspired deficit that precludes people from appreciating the dangers that you try to address and what needs to be done to turn things around. As a teacher for the Los Angeles Unified School District, I reported the fraudulent graduation of 79 students from my school with valid diplomas, even though the vast majority had elementary school reading abilities with some as low as 2nd grade. This is exactly the same kind of fraud that was reported last week as having been practiced in NYC for the last 7 years, where the public was told that Blacks and Latinos were improving, when in fact the assessments were being fixed and the students were actually doing worse- good future soldiers.

We are all aware of the Teflon nature of Wall Street, the banks, the health insurance industry, and petro-corporations like B.P., but I do not think that there is sufficient awareness as to untouchable nature of yet another pillar of the failed status quo- public education- which the rich and affluent- mostly White population- has continued to abandon since the landmark case of Brown vs. Board of Education. Simply put, I often wonder how many of my ex-students of whom over 50% drop out of school have died in Iraq and Afghanistan without being able to find it on the map. In American society and elsewhere, education functions like a beehive, where some get the royal jelly in private schools while others get the royal shaft in public schools.

At my site: www.perdaily.com, I try to cover the stories that are completely and utterly blacked out by media like radio, television, the Los Angeles Times, New York Times, and the Washington post. It is Isvestia and Pravadaesque how managed the discussion of public education reform is, where the reality is that if the corrupt underlying big city and predominantly minority filled public schools were reformed, no other reform models would be necessary nor would teachers be blamed for a system they have no power over.

I was arrested and removed from my classroom for publishing the following story on my website:

After 5 months on administrative leave, where I have been confined to my house, I was just notified that LAUSD is going to move for my termination as a teacher. I have been a teacher for over 24 years in both the United States and France at both the secondary and university levels with no marks against me until I reported the above referenced story. Anything that you and organizations like Wiki leaks are doing will be of little value if the audience that has the education sufficient to understand what you are talking about is allowed to be diminished without addressing this issue.

I will never ask you to trust me about anything that I cannot substantiate with hard evidence. At the present time, I have been getting my brains beaten out by people that make me think of Eli Weisel's comment about the banality of evil. Any help you or any other organizations might offer in publicizing what is happening to me and more importantly to my students who are literally dying or filling up the prisons- 334,000 in California and going strong- would be greatly appreciated.


P.S, I am presently in Boquete, Panama and will be back in the States on August 30th