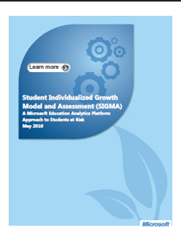 May 27, 2010, 1:29pm PDT -- Microsoft released a new white paper today outlining ways in which its emerging business intelligence platform can (and has been) used by schools to far more effectively manage, mine, and analyze the data with which schools are inundated. While most public schools are collecting massive amounts of data in a variety of silos from student management systems to state-provided data warehouses, few are able to proactively apply those data to predict which students will struggle, fail, and ultimately leave the system without completing high school.

Microsoft is not known as a BI company. SAS, IBM, SAP, and Oracle immediately come to mind for most CIOs when they think business intelligence. For that matter, the term “business intelligence” sounds antithetical to educational pursuits and isn’t something that tends to enter into the educational meme. However, not only has Microsoft developed a powerful and highly accessible BI platform, but schools are increasingly realizing that they must find new strategies if they wish to live up to the ideal of “data-driven instruction” and harness wide-ranging data points to improve outcomes for students.

The Microsoft white paper identifies Key Predictive Indicators, or KPIs associated in particular with student dropouts. The company has worked extensively with the National Dropout Prevention Center to assemble these KPIs and help schools and partnering developers create business rules around student achievement. Again, the idea of business rules sounds strange rolling off an educator’s tongue, but just as, for example, a mutual fund may use a variety of data to determine when to buy or sell shares of stock, so must schools have data-driven triggers for implementing interventions. These interventions would ideally happen before a student drops out, fails a class, or loses credit, rather than after the fact.

One of the things that most impressed me at the Office/Sharepoint 2010 launch was the ease with which any Excel power user could perform powerful ad hoc BI analysis from virtually any back end data store. Thus, teachers, principals, guidance counselors, and any other educator can leverage familiar tools in Excel to monitor and act upon student data if schools, districts, and states invest the time to integrate those data stores and make them accessible.

This is no small task, of course. In fact, as anyone who has tried to tackle NCLB, local, and formative assessment data to come up with something meaningful knows, it’s incredibly daunting. However, companies are emerging quickly, as are partnerships (this one sponsored by Microsoft) that can steer educational institutions in the right direction. Despite the potential cost and effort, it’s important to remember that corporations have been relying upon data to make key decisions and predict outcomes for years. Doesn’t it make sense that schools, whose deliverables are arguably more valuable than just about anything corporate America might create, should do the same?

Chris Dawson is a freelance writer and consultant with years of experience in educational technology and web-based systems.