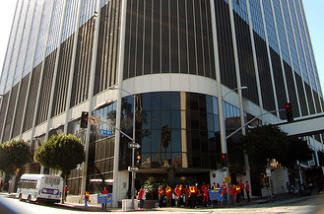 Feb. 19, 2010 |L.A. Unified’s teachers’ union organized protests today and for next week against school district administrators. The union is upset that the superintendent has tentatively allowed outside groups to assume control of new and low-performing campuses.

The school district received 85 proposals to run three dozen campuses. Teachers, charter school companies and other nonprofits crafted the plans. The superintendent is recommending teacher and district-written plans for more than half the schools. Outside groups could run another quarter of the schools.

Kirsten Ellis, a teacher there, doesn’t like the idea. "We demand that the school board and the superintendent adhere to and follow the vote of the people, instead of throwing it out and ignoring it."

The board of education is set to discuss — and possibly, to vote — on the recommendations at Tuesday’s meeting.

For public school educators in Los Angeles, and California in general, the bidding for public schools in LAUSD has brought tragedy, shame, and a powerful warning to all other districts in the state. In a political atmosphere saturated with misinformation and false premises and promises, public schools are offered as if they were cast-off commodities to the best bidder. After years of living in unfair scrutiny and infamy, thousands of students, parents, teachers, administrators, and communities go through an ignominious path which leads most of them towards an even more uncertain future.

The LA Times reporter couldn’t have chosen a most adequate language to describe and give meaning to the news --the language of the free-market. If there ever was any teacher among us who believe the reformers premises of “choice” and “accountability,” this news and its wording exhibit the cold hard truth behind the rhetoric of the education reform: dismantling public education.

Thirty public schools are up for grabs; eighteen in a competitive political bid supervised by Superintendent Cortines. The bidders are groups of teachers and administrators, who are constrained by laws and are not liked by the Superintendent Cortines, versus the charter school operators, which are exempted from most of the laws, and Mayor Villaraigoza’s non-profit group.

This whole episode in the public schools saga is nothing but the same travesty employed by the reformers in order to distract everybody from the real (not so long term) goal of privatizing public education. Let’s be clear about it: empiric evidence and academic research show that the takeover of public schools has not given significant positive results. For that alone, this option would have to be discarded altogether.

If the reformers’ main point is to improve education by fostering more local power, the whole concepts of charter schools or mayoral control are unnecessary and ineffective. Public schools can achieve such goal for less money and without dividing the community or undermining democracy. It is absurd to correct the problems of a large school by creating “smaller” schools inside it. First of all, the division does not solve the problems; it just creates a selected and privileged group and another relegated to a default second class education. Secondly, this measure undermines the efforts to determine the real problems. Instead of finding the main causes of the problems in each school, stakeholders are busy trying to implement unproven formulas. Finally, the whole idea of improving schools by destroying them is plainly ludicrous. The trade of something real that can be improved for a fantasy does not even deserve consideration. It is ironic that reformers argue against public schools asking for empowerment of local communities and schools while proposing alternatives that divide them and remove their democratic fabric.

Who wins, who loses, who cares?

There are many at my school, myself included, that applaud the succinct words of Mr. Sergio Flores regarding the realities of money, politics and power being the white elephants in the current state of business in our field of education. It just very sad that the actual people who do work in the district headquarters appear to be hiding behind this dehumanized sense of corporate entity, without considering whose money, whose lives and whose destinies they are manipulating. My colleagues and support staff members work very hard to provide every day the highest quality of education to our students, irregardless of their cognitive abilities, school skills, physical and emotional well-being. Many of us work 10 hour work-days so we may amplify to the highest outcome possible, our district mandated curriculum and materials, that were designed in a generic mode. Likewise, many of our staff spend our own money on materials necessary to help our English Language Learners get their "aha" moments of comprehension. Yet how is it that when we try to buy some lap-tops at Best-Buy for $500.00 each so that we all have working lap-tops with which to demo parts of our math lessons( part of the new math curriculum materials), we are told we must buy those same lap-tops thru the district vendors at $1,000.00 each?! How is it that Mr. Cortines boasts of taking a furlough day when thousands of special-ed teaching assistants( 6 hour positions) must take monthly ones and totally disrupt countless special-ed classroom's instruction for that day for countless special-ed students and their primary teachers?! Yet just now Mr. Cortines resigns from his post with Scholastic ( which paid $150,000 yearly) that has a contract with the middle schools and senior highs of our fair district? Methinks something fishy smells in the daily transactions of our behemoth district!