NOVEL SCHOOL PLAN UPHELD: Los Angeles' Board of Education voted Tuesday to hand over some of its public schools to charter school operators and teachers groups, part of an unusual experiment.

FEBRUARY 24, 2010--LOS ANGELES—The city's Board of Education voted Tuesday to hand over some of its public schools to charter school operators and teachers groups, part of an unusual experiment to see whether outsiders will have better luck improving student achievement in the nation's second-largest school district. 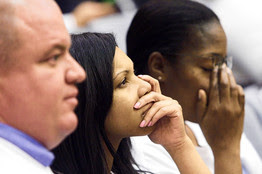 But most of the 30 campuses, some with more than one school, were awarded to teachers and administrators employed by the school district. The board awarded four schools to charter groups, and two schools to a group led by Los Angeles Mayor Antonio Villaraigosa. The majority of the schools were awarded to teachers' groups. The board's vote was a blow to charter advocates and a boost to teachers in the city's divided education community.

Hundreds of parents, teachers and charter school advocates had gathered outside school board offices all day, and packed the board room during the five-hour meeting.

"We're extremely disappointed in the vote today,'' said Lauren Carter, and administer for ICEF, Inner City Education Foundation, a charter school group that runs 15 schools in Los Angeles and hoped to be awarded a new Los Angeles school Tuesday. Instead, the board voted to give the school to a teachers' group. "We were looking for more bold action from board members to make decisions for what was in the best interests of the kids. It's a sad, sad day for us."

The district's 45,000-member teachers' union saw charter schools as a threat that could hand more power to groups such as charter schools. Charter-school groups had hoped they would be able to expand their operations.

"We think it's a victory for students and the collaboration between teachers and parents and administrators," said A.J. Duffy, president of United Teachers Los Angeles, the teachers' union. "The world is going to see what we've been saying all along: Give the authority to teachers and we will create quality schools." 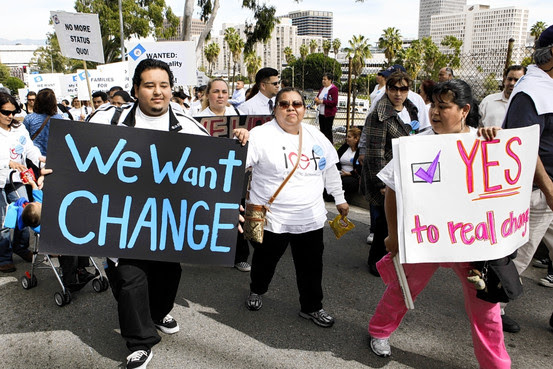 Associated Press -- Hundreds of teachers and parents marched Tuesday in the plan's favor.

Under a resolution passed last year, the Los Angeles Board of Education for the first time allowed charter schools and outsiders to bid for the right to operate schools deemed "public school choice" sites.

The board ratified most of Mr. Cortines's recommendations, but reassigned a few schools to teacher groups, instead of the charter groups Mr. Cortines had recommended.

The changes will affect 38,000 students.

Los Angeles already has more charter schools than any other district in the country—an estimated 161, according to district figures. Though charter schools have blossomed in the city, charter advocates complain their growth has been hampered because they haven't been able to gain easy access to space at school buildings.

Charters are part of the public-school system but have more leeway in how to allocate funds, hire teachers and develop curricula. The teachers' union in Los Angeles has typically been opposed to charters because they aren't obligated to hire under union contracts.

Measuring the success of charter schools is complicated, because many of them are new and don't have as much historical data on student achievement as public schools. Charter schools have been popular, in part, because they offer parents greater control over their children's education. Some studies have shown charter students outperforming their public school peers, while other studies show charter schools falling behind in some categories.