10/6 -- With special math and science programs for girls and "brain breaks" for boys, Los Angeles Unified embarked Monday on an educational experiment as it opened a campus that segregates students by gender. 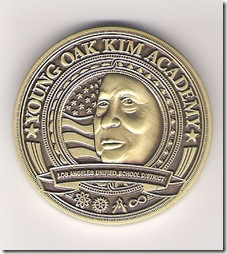 A ribbon-cutting ceremony formally recognized the opening of Young Oak Kim Academy Middle School in the Pico-Union District, where 750 boys and girls attend academic classes on separate floors and come together only at lunch.

"This is yet another element of reform," school board President Monica Garcia said. "We have to try as many strategies as possible to see what helps our students excel and grow ... We cannot continue to do one-size-fits-all."

Garcia said the single-gender concept could someday be replicated at other district schools.

Studies cited by the National Association for Single Sex Education have shown that students in a single-gender classroom can outperform their counterparts taught in a coed setting.

A three-year study conducted by Stetson University in Florida found that boys in single-sex classes demonstrated a proficiency of 86 percent on standardized tests compared to 37 percent for boys in coed settings.

And students in all-girl classes earned a 75 percent score, compared with 59 percent proficiency among girls in coed classes.

At YOKA, educators have taken the program a step further, creating separate lesson plans for boys and girls.

Because research shows that adolescent girls thrive in groups and learn well in lectures, teachers at YOKA assign the girls a lot of collaborative projects. There's also an emphasis on math, science and technology because girls traditionally do not pursue these fields as aggressively as boys do.

The boys' classes, meanwhile, incorporate "brain breaks" that allow the students time to digest the lesson they've just been taught. There are even amplifiers in the boys' classrooms because studies show that adolescent boys have a less developed sense of hearing than adolescent girls.

Teachers say YOKA provides an opportunity to understand the differences in how boys and girls learn - and experiment with ways to help them achieve.

"You need to think about equity versus equality," art teacher Katherine Harrison.

"`Equity' says everyone has access, `equal' says everyone gets the same thing ... But we are not all exactly the same," she said. "This is about finding individual strengths and using them to overcome weaknesses."

The process of introducing the single-gender campus started in 2004, under the guidance of then-District 4 Superintendent Richard Alonzo, who began recruiting teachers and counselors trained for the alternative environment.

"We didn't just bring children to a new school," Alonzo recalled. "We thought very carefully about what kind of school we wanted."

Advocates for a single-gender school faced an obstacle early on because of federal laws that mandated equal access to programs and services for boys and girls. Changes made in those laws in 2006, coupled with incentives for innovation included in the No Child Left Behind Act, paved the way for YOKA and other single-sex campuses.

Now, more than 500 schools in the country offer single-sex educational programs or classes.

Named for the first Asian-American colonel to lead a U.S. battalion in war, YOKA was built as part of LAUSD's $20 billion construction program. It is designed to relieve overcrowding at Virgil and Berendo middle schools, which still operate on year-round calendars.

For many parents in the Pico-Union community - home to many Latino or Asian immigrants - the single-sex concept is very familiar.

"I was raised the same way in El Salvador," said Lucy Cortes, whose sixth-grade son attends YOKA. "I think it's a great option that allows our kids to focus more in school."

Good and Glorious Morning. This is a great and glorious day for this Community, for this school district and for the greater community - for the City of Angels we aspire to be.

This community, your community - you kids - is getting a new middle school.

There is no more important or challenging level of education than middle school; it is here - within the walls we dedicate today , that the future will be formed, dreamed and begun …or lost and allowed to get away.

Building schools is the best thing any community does. When we build schools we make positive investments in our future way beyond the news cycle or the election cycle or the demographic projection …we are stretching the blank canvas that will be your masterpiece.

I did my homework for this little speech: I refreshed my memory about Young Oak Kim. How his father ran a grocery at Temple and Figueroa. How he graduated from Belmont High School and attended LACC. How, with war on the horizon he fought for the right to fight for his country. How he said "There is no Japanese nor Korean here. We're all Americans and we're fighting for the same cause."  He fought long and hard and well; he truly served his country, in war and peace; in the military and in civilian life. He won medals and he built museums and monuments, education and cultural and health centers. The headline in his obituary said Young Oak Kim was "a World War Two and Korean War Hero …and a Uniter of LA Asian Communities". A Hero among heroes …and a Uniter. An inspiration and a visionary. It doesn't get any better than that …and we dearly need more Americans like him.

The kids who will go to this school - some of the young faces we see here today - will learn things in their lives that Nobel Prize winners haven't discovered yet. And as they go through life they will discover and learn even newer things …things they will teach their children; things that will win them Nobel Prizes. That is what civilization and the magic of education is all about.

These things are not easy; challenges never are.. They are promises made in one generation and kept by the next - in making the promise and keeping the promise we pass the challenge into the future.

We have made a promise to parents, voters and taxpayers — but mostly to the children; present and future: We promised to build new schools and fix up the old ones when the approved Proposition BB and Measures K, R. Y  and Q.

You don’t need me to tell you, you only have to look around you to see the promise is being kept.

We need it put up our magic tent many more times …and we will.

Kids, Treat this school and the schools you attend today well and learn good things. Treat each other well. Work hard, Play fair and be safe. Make lifelong friends. Do your homework. Earn extra credit. Take every opportunity and make the best of it. Learn from your mistakes. Paint. Sing. Graduate. Win medals, build museums. Unify. Make a little magic every day. Go from here on to high schools, colleges and universities and community colleges and art schools — to law school and medical school and trade schools and – go to teachers colleges. Win medals, build museums, unite communities. And if you go to beauty school become the best beautician in the history of beauty itself!

Parents and teachers, fellow adults: Help them do these things - and then stand back!

Because you kids are magic and you are the future. So let's roll.