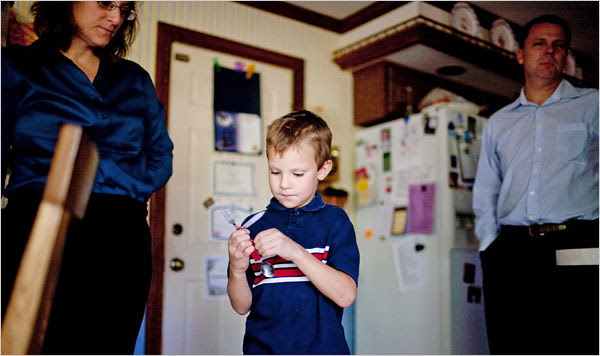 Mustafah Abdulaziz for The New York Times -- Zachary Christie with his mother, Debbie, his father, Curtis, and the Cub Scout utensil that got him suspended from school.

October 12, 2009 -- NEWARK, Del. — Finding character witnesses when you are 6 years old is not easy. But there was Zachary Christie last week at a school disciplinary committee hearing with his karate instructor and his mother’s fiancé by his side to vouch for him.

Zachary’s offense? Taking a camping utensil that can serve as a knife, fork and spoon to school. He was so excited about recently joining the Cub Scouts that he wanted to use it at lunch. School officials concluded that he had violated their zero-tolerance policy on weapons, and Zachary was suspended and now faces 45 days in the district’s reform school.

“It just seems unfair,” Zachary said, pausing as he practiced writing lower-case letters with his mother, who is home-schooling him while the family tries to overturn his punishment.

Spurred in part by the Columbine and Virginia Tech shootings, many school districts around the country adopted zero-tolerance policies on the possession of weapons on school grounds. More recently, there has been growing debate over whether the policies have gone too far.

But, based on the code of conduct for the Christina School District, where Zachary is a first grader, school officials had no choice. They had to suspend him because, “regardless of possessor’s intent,” knives are banned.

But the question on the minds of residents here is: Why do school officials not have more discretion in such cases?

“Zachary wears a suit and tie some days to school by his own choice because he takes school so seriously,” said Debbie Christie, Zachary’s mother, who started a Web site, helpzachary.com, in hopes of recruiting supporters to pressure the local school board at its next open meeting on Tuesday. “He is not some sort of threat to his classmates.”

Still, some school administrators argue that it is difficult to distinguish innocent pranks and mistakes from more serious threats, and that the policies must be strict to protect students.

“There is no parent who wants to get a phone call where they hear that their child no longer has two good seeing eyes because there was a scuffle and someone pulled out a knife,” said George Evans, the president of the Christina district’s school board. He defended the decision, but added that the board might adjust the rules when it comes to younger children like Zachary.

Critics contend that zero-tolerance policies like those in the Christina district have led to sharp increases in suspensions and expulsions, often putting children on the streets or in other places where their behavior only worsens, and that the policies undermine the ability of school officials to use common sense in handling minor infractions.

For Delaware, Zachary’s case is especially frustrating because last year state lawmakers tried to make disciplinary rules more flexible by giving local boards authority to, “on a case-by-case basis, modify the terms of the expulsion.”

The law was introduced after a third-grade girl was expelled for a year because her grandmother had sent a birthday cake to school, along with a knife to cut it. The teacher called the principal — but not before using the knife to cut and serve the cake.

In Zachary’s case, the state’s new law did not help because it mentions only expulsion and does not explicitly address suspensions. A revised law is being drafted to include suspensions.

“We didn’t want our son becoming the poster child for this,” Ms. Christie said, “but this is out of control.”

In a letter to the district’s disciplinary committee, State Representative Teresa L. Schooley, Democrat of Newark, wrote, “I am asking each of you to consider the situation, get all the facts, find out about Zach and his family and then act with common sense for the well-being of this child.”

Education experts say that zero-tolerance policies initially allowed authorities more leeway in punishing students, but were applied in a discriminatory fashion. Many studies indicate that African-Americans were several times more likely to be suspended or expelled than other students for the same offenses.

“The result of those studies is that more school districts have removed discretion in applying the disciplinary policies to avoid criticism of being biased,” said Ronnie Casella, an associate professor of education at Central Connecticut State University who has written about school violence. He added that there is no evidence that zero-tolerance policies make schools safer.

Other school districts are also trying to address problems they say have stemmed in part from overly strict zero-tolerance policies.

In Baltimore, around 10,000 students, about 12 percent of the city’s enrollment, were suspended during the 2006-7 school year, mostly for disruption and insubordination, according to a report by the Open Society Institute-Baltimore. School officials there are rewriting the disciplinary code, to route students to counseling rather than suspension.

In Milwaukee, where school officials reported that 40 percent of ninth graders had been suspended at least once in the 2006-7 school year, the superintendent has encouraged teachers not to overreact to student misconduct.

“Something has to change,” said Dodi Herbert, whose 13-year old son, Kyle, was suspended in May and ordered to attend the Christina district’s reform school for 45 days after another student dropped a pocket knife in his lap. School officials declined to comment on the case for reasons of privacy.

Ms. Herbert, who said her son was a straight-A student, has since been home-schooling him instead of sending him to the reform school.

The Christina school district attracted similar controversy in 2007 when it expelled a seventh-grade girl who had used a utility knife to cut windows out of a paper house for a class project.

Charles P. Ewing, a professor of law and psychology at the University at Buffalo Law School who has written about school safety issues, said he favored a strict zero-tolerance approach.

“There are still serious threats every day in schools,” Dr. Ewing said, adding that giving school officials discretion holds the potential for discrimination and requires the kind of threat assessments that only law enforcement is equipped to make.

In the 2005-6 school year, 86 percent of public schools reported at least one violent crime, theft or other crime, according to the most recent federal survey.

And yet, federal studies by the Centers for Disease Control and Prevention and another by the Department of Justice show that the rate of school-related homicides and nonfatal violence has fallen over most of the past decade.

Educational experts say the decline is less a result of zero-tolerance policies than of other programs like peer mediation, student support groups and adult mentorships, as well as an overall decrease in all forms of crime.

For Zachary, it is not school violence that has left him reluctant to return to classes.

“I just think the other kids may tease me for being in trouble,” he said, pausing before adding, “but I think the rules are what is wrong, not me.”