Published: October 22, 2009  || Theodore R. Sizer, one of the country’s most prominent education-reform advocates, whose pluralistic vision of the American high school helped shape the national discourse on education and revise decades-old ideas of what a school should be, died on Wednesday at his home in Harvard, Mass. He was 77.

The cause was, colon cancer, said his wife, Nancy Faust Sizer. 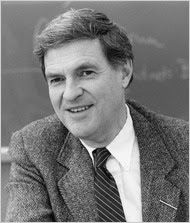 A former dean of the Harvard Graduate School of Education, Professor Sizer was later the headmaster of Phillips Academy, the preparatory school in Andover, Mass., and chairman of the education department at Brown University. He returned to Harvard as a visiting professor in 1997.

Professor Sizer was best known as the father of the Essential Schools movement, which he founded in 1984. The movement’s umbrella organization, the Coalition of Essential Schools, spans a diverse array of public and private schools united by their adherence to a set of common principles.

The principles hold, among other things, that a school is an egalitarian community and that the student is a valued worker in that community, with the teacher in the role of mentor or coach. Depth of knowledge is emphasized over breadth, with the mastery of a few core subjects preferred over the scattershot spate of electives the modern high school seems to favor.

Begun with 12 schools, the coalition now encompasses several hundred across the country, plus a handful overseas. Essential Schools active today include the Alabama School of Fine Arts in Birmingham, Fenway High School in Boston, the Urban Academy Laboratory High School in Manhattan and University Heights High School in the Bronx.

The Essential Schools movement sprang from Professor Sizer’s seminal book “Horace’s Compromise: The Dilemma of the American High School” (1984). In it, he created an archetypal hero, Horace Smith, a high school English teacher. Horace is devoted to his work but frustrated at every turn by the entrenched limitations of the American educational system, many of them holdovers from 19th-century pedagogic practice.

Horace’s story provides the narrative armature for a battery of sobering statistics, amassed by Professor Sizer in the course of an extended study of dozens of American high schools. The “compromise” of the book’s title is the tacit compact between teacher and students that was the order of the day in far too many schools, Professor Sizer and his associates found. Do not make trouble for me, the teacher’s side of the compact went, and I will demand little of you in return.

Professor Sizer was also the founder and first director of the Annenberg Institute for School Reform at Brown University. Begun in 1993 and financed in large part by a $50-million gift from the publisher and philanthropist Walter H. Annenberg, the institute is dedicated to improving public education in the United States.

With his wife, Professor Sizer wrote “The Students Are Watching” (Beacon Press, 1999), about moral education.

Theodore Ryland Sizer was born in New Haven on June 23, 1932. His father, Theodore, was a well-known art historian at Yale. After earning a bachelor’s degree in English from Yale in 1953, the younger Mr. Sizer served as an Army artillery officer, an experience that would determine the course of his professional life.

Few of the young soldiers who served under him had completed high school, but when treated democratically, as members of a cohesive group, they learned new skills readily, he found.

“Whatever troops you got had to deliver,” Professor Sizer told Phi Delta Kappan magazine in 1996. “If one person didn’t do it, he put everybody’s life at stake. That made a deep impression. There was no tracking in the Army, just the beliefs that somehow these young men had to be trained and had to be reliable and that all soldiers can learn.”

After teaching in high schools in Massachusetts and Melbourne, Australia, Mr. Sizer earned two graduate degrees from Harvard, a master of arts in teaching in 1957 and a doctorate in education and American history in 1961. He was a faculty member of the Harvard Graduate School of Education before becoming its dean in 1964. He held the post till 1972, when he became headmaster at Phillips Academy.

A champion of the philosophy of the educational reformer John Dewey (1859-1952), Professor Sizer emerged from the study more persuaded than ever that education must be rooted in a kind of democratic pluralism. In his ideal, educational policy should be determined from the bottom up, at the level of the school, rather than as a result of state or federal directives. Schools, he argued, should abandon one-size-fits-all educational methods like standardized tests, grading and even the grouping of students into classes by age.

Professor Sizer had his critics. Some observers, while sympathetic to his aims, felt that the tenets of the Essential Schools movement were far better articulated on paper than in practice. Writing in The New York Times Book Review in 1999 (the book under review was “The Students Are Watching”), James Traub encapsulated their point of view:

“The coalition schools illustrate a vexing problem for progressives, for while the best of them are inspiring, most of them, as Sizer himself has acknowledged, fall far short of the founding principles.”

Professor Sizer’s other books include “Secondary Schools at the Turn of the Century” (Yale University, 1964); “Places for Learning, Places for Joy: Speculations on American School Reform” (Harvard University 1973); and “The Red Pencil: Convictions From Experience in Education” (Yale University, 2004).

From 1998 to 1999, Professor Sizer and his wife were acting co-principals of the Francis W. Parker Charter Essential School in Devens, Mass. Their experience inspired a book, “Keeping School: Letters to Families From Principals of Two Small Schools” (Beacon Press, 2004), which they wrote with Deborah Meier.

Though much of Professor Sizer’s work focused on the roles of teachers and administrators, he seldom lost sight of the group he considered the primary actors in the educational process.

“Horace Smith and his ablest colleagues may be the key to better high schools, but it is respected adolescents who will shape them,” he wrote in “Horace’s Compromise.” He added:

“Inspiration, hunger: these are the qualities that drive good schools. The best we educational planners can do is to create the most likely conditions for them to flourish, and then get out of their way.”