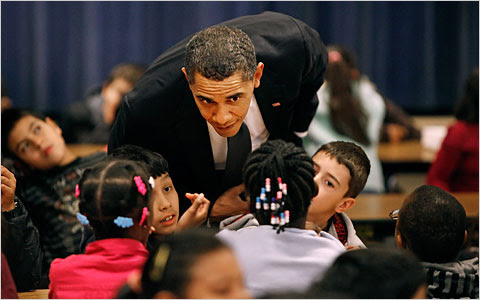 October 19, 2009 , 1:56 pm -- President Obama popped in on third and fourth-graders at a Silver Spring, Md. elementary school Monday, to tout the benefits of reading for youngsters, just as they were having lunch.

The First Reader stopped by the cafeteria at Viers Mill School, where Mr. Obama admitted to having read Harry Potter books (with his daughter, Malia), but not the Goosebumps series of children’s horror books that are apparently a favorite of many of the kids at the school. 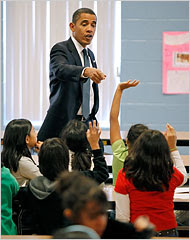 <<Chip Somodevilla/Getty Images Viers Mill schoolchildren squealed when the president called on them.

The school receives federal poverty aid and has closed the achievement gap between minority children and other students, administration officials said.

In his brief remarks to the students, Mr. Obama said “I have heard great things about your school and everybody here is reading all the time.”

He called for a show of hands on how many planned to go to college. Every hand went up.