PRIMARY LURES THOSE TOO YOUNG TO VOTE

April 19, 2008 -FLOURTOWN, Pa. — The primary race between Senators Hillary Rodham Clinton and Barack Obama could be decided in places like this bedroom community in southeastern Pennsylvania, where polls show the two Democratic presidential candidates running tight.

So it was with obvious gravity that 74 fourth graders at Erdenheim Elementary School assembled this week behind the glass and tan brick walls of their classrooms to debate the campaign’s central issues. The children, most 9 or 10, then signaled their preferences for the Democratic nomination in a gradewide straw poll. 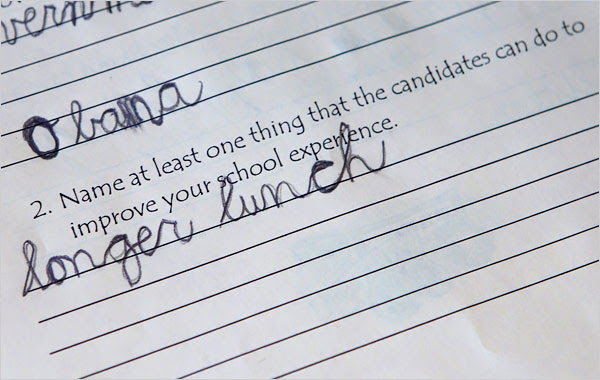 “It’s a battle between man and the environment, and the environment’s losing right now,” Michael Kassabian announced to his fellow voters in Renea Boles’s room, before explaining that he was endorsing Mr. Obama at least partly because of the candidate’s enthusiasm for renewable energy sources.

Henry Centeno said that the candidates’ stances on health care should take precedence, and that his support depended on which candidate would guarantee health insurance for anyone age 25 or younger. Why 25? “If it’s 25,” he said, “Miss Boles would still have free health care.” (His teacher, he knew, is 24.)

Just as their parents and grandparents are paying close attention to the drawn-out fight for the Democratic nomination, so too are those who will not cast an official vote for president for another decade or so. While no polling outfit has systematically canvassed those Americans who are more attuned to the nuances of Hannah Montana than Hannah Arendt, the enthusiasm generated by similar straw polls in places like Austin, Tex.; Scotch Plains, N.J.; and Broward County, Fla., suggests that young children are more engaged in this year’s presidential race than any other in recent memory.

That is at least partly because even the youngest school-age children are aware that either Democratic nominee would make history. So, for that matter, would the presumed Republican candidate. “McCain would be the oldest elected president,” said Anthony Bosca, another student in Miss Boles’s class.

The war in Iraq and the calls by the Democratic candidates to withdraw American troops also loom large. When the children in Miss Boles’s class were asked if they knew anyone who had served in Iraq, Elizabeth Reynolds shot up her hand. “Dana’s uncle,” she said, pointing toward Dana Jones, who related how her uncle had recently returned from a tour in the Army, but would soon be going back to Iraq.

The children here have been bombarded with television commercials for the candidates in recent weeks — with those in Miss Boles’s class saying they had seen campaign advertisements during “American Idol,” “Jeopardy,” “Who Wants to Be a Millionaire,” CBS’s coverage of the Masters golf tournament and even on Nickelodeon.

“It’s just a frenzy,” said Barbara Stefano, whose fourth-grade classroom is down a blue-and-cream cinder block corridor from Miss Boles’s, and who has been teaching for 44 years. “They know a lot more than they ever have. They know there’s a primary. I don’t ever remember talking about the primary in class before.”

The students are also talking about the presidential race with their parents, and even doing some independent research.

“I remember something I learned about Hillary,” Elizabeth told her classmates. “It’s not like a marriage between Hillary and Bill. It’s more like an agreement. She helps him. He helps her.”

Asked where she had gleaned this information about Mrs. Clinton, from New York, and her husband, the former president, she said, “I saw it on AOL.com.”

Sitting nearby, Ethan Steinberg sought to summarize the Democratic candidates’ Senate votes on an early measure to authorize the war. “At first Hillary wanted the war to go on,” he said, recounting a newspaper article he had read. “Then a little later she changed her mind and wanted the troops to come home. Obama voted that the troops shouldn’t go to war. He thought it would cause too many problems.”

Soon after, Colin Criniti, the classroom’s resident expert on Senator John McCain of Arizona — he had dutifully reported to his teacher when Mr. McCain’s opponent Mitt Romney dropped out of the race — raised a hand.

“If Hillary or Obama win, they will pull the troops out of the war,” Colin said. “I think it’s a stupid idea. We’ll lose everything we’ve worked for.”

Colin said he was supporting Mr. McCain, who, he said, offered the promise of a more measured approach to the war.

After the children spent time discussing short position papers that the teachers had prepared on subjects like health care and education, it was time to vote.

Each child received a thin strip of white paper with open boxes next to the names of Mrs. Clinton and Mr. Obama, of Illinois. (Since there is no contested Republican primary in Pennsylvania, the teachers had focused on the Democratic race.)

“Fold it once,” Miss Boles instructed. “No origami.”

The children then stuffed their ballots into a cardboard box that had been wrapped in bright yellow paper.

Later, the teachers announced the gradewide results: 52 votes for Mr. Obama and 21 for Mrs. Clinton (with one ballot, marked for both, disqualified). In Miss Boles’s class, the vote was more lopsided: Mrs. Clinton garnered just 2 of the 20 votes cast.

But to their teachers, the children’s preferences were less important than their embrace of politics.

“I feel better about our future,” said Mrs. Stefano, 62. “I’m getting to the point where I’m going to need these kids to take care of me. This gives me hope.”