SICK ANIMALS WERE ABUSED TO GET THEM TO STAND UP TO PASS INSPECTION, UNDERCOVER VIDEO SHOWS. USE OF MEAT FROM 'DOWNER' COWS IS BANNED.

January 31, 2008 — WASHINGTON — The U.S. Department of Agriculture announced Wednesday that it was investigating a Chino-based supplier of meat to the National School Lunch Program after release of a video showing slaughterhouse workers using inhumane and illegal practices on weak and sick cows. 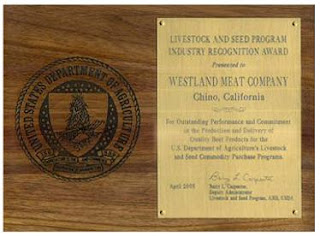 The video, presented by the Humane Society of the at a news conference Wednesday morning, showed workers at Hallmark Meat Packing using forklifts to pick up and roll animals too weak to stand and forcing sick or weak cows to stand by shooting high-pressure water sprays into their nostrils or repeatedly shocking them with electricity.

__________________________
UPDATE: State urges schools ban suspect beef: L.A. Unified will offer substitute items after discovering that a supplier butchered weak and ill cattle
from the LA Times - February 1, 2008: The California Department of Education on Thursday urged school districts throughout the state to stop serving all but a few beef products after allegations that a Chino-based meat supplier butchered and distributed weak or ill cattle.

Federal and laws prohibit the slaughter of "downer" cattle -- those that cannot stand or walk -- for the human food supply, to prevent both animal cruelty and the consumption of meat from unhealthy animals.

Meat processed at Hallmark is distributed by Westland Meat Co., also of . According to the USDA, sold 27 million pounds of frozen meat last year to federal food and nutrition programs, including those that provide school lunches and meals for the poor and elderly. Nearly 8 million pounds of that meat went to programs in ; of that amount, more than 5.7 million pounds was used in the area.

The Humane Society said the hidden-camera video was taken by a person who worked at the plant for six weeks last year as part of an undercover investigation by the group. Within hours of the video's release, the USDA suspended 's participation in the food and nutrition programs and placed a hold on all products destined for the programs.

Steve Mendell, president and chief executive officer of both and Hallmark, was meeting Wednesday afternoon with USDA officials and was not available for comment. The company released a statement in his name saying it had "taken immediate action to terminate the two employees and suspend their supervisor pending his explanation."

The USDA inspects animals ready for slaughter at Hallmark in the morning and afternoon. Wayne Pacelle, president of the Humane Society, told the news conference that the abuse took place before the inspector arrived at the slaughterhouse in the morning.

"The attempt was to make them so distressed and to cause them so much suffering that these animals would get up and walk into the slaughterhouse," he said. "If they could walk past [the inspector] or even just stand, they would pass."

's general manager, Anthony Magidow, said the workers' actions on the video do not reflect the company's standard practices. He said the slaughterhouse was audited monthly by the USDA and a private firm to monitor employee practices.

"We got on this the moment we found out," Magidow said. The company obtained the video Tuesday after the Washington Post reported its existence.

Magidow said the employees shown in the video had worked in the slaughterhouse for many years and "felt they knew how to handle these animals better than we do."

U.S. Agriculture Secretary Ed Schafer issued a news release late Wednesday expressing confidence in the food inspection system, while adding that he was "deeply concerned" about the Humane Society's allegations. But he faulted the society, which he said "did not present this information to us when these alleged violations occurred in the fall of 2007. Had we known at the time the alleged violations occurred, we would have initiated our investigation sooner and taken appropriate actions at that time."

In response, the society said it had turned over the results of its investigation to the "appropriate law enforcement officials."

Local authorities, the society said, had asked for "extra time" before the information became public.

The USDA banned the use of "downer" cows for slaughter in 1989 after bovine spongiform encephalopathy, or BSE, began to spread across the .

Regulations were tightened in 2003 after a cow with BSE was identified in state.

Studies by several universities have shown a correlation between "downer" cows and those with BSE, popularly known as mad cow disease.

Of the 15 cases of mad cow disease found in -- most of them in -- 12 have been from "downer" cows. Although it is rare, people can contract a form of the disease by eating meat from cows with BSE.

"By allowing 'downers' in our food supply, we are putting consumers at risk," said Dr. Michael Greger, the Humane Society's director of public health and animal agriculture.

"The American food supply is safe, but it could be safer. We wouldn't be raising the food safety issue if it wasn't an issue."

▲smf's 2¢: 101 years after the publication of "The Jungle" - which ironically led to the creation of the federal meat inspection program - this sort of criminal mistreatment of livestock and reckless endangerment of human life - schoolchildren no less - persists. At a meat packer who - to redouble the irony - won the School Lunch Program Supplier of the Year Award for '04-'05!

The danger of food poisoning and toxic food contamination is every school food service workers biggest fear, according to LAUSD Food Services director Dennis Barrett, knowing they are preparing meals every day that go to hundreds of thousands of young children.

One wouldn't want to influence any judges in any pending legal actions — but one hopes the perpetrators at Hallmark/Westland are hastened to the slammer with fork lifts and cattle prods.

4LAKids enjoys a hamburger as much (or more so) as the next person, but I've seen the undercover video and I'm rethinking my carnivorousness – (Is that a word? The thesaurus offers up 'carnivory' also - and I suppose the four-time PTA president should avoid 'carnality'!) – even as I recollect the instantaneous recall of literally tons of packaged lettuce and spinach from warehouses, delivery trucks and cafeteria refrigerators in LAUSD during last year's tainted veggie e. coli scare.

School Lunch Programs in Other Lands:
What's to eat in the global school cafeteria?