A BREAK-IN AT MCKINLEY AVENUE ELEMENTARY SCHOOL WAS ONE OF NEARLY 60 SUCH ACTS AT UNIFIED CAMPUSES DURING THE WINTER BREAK. 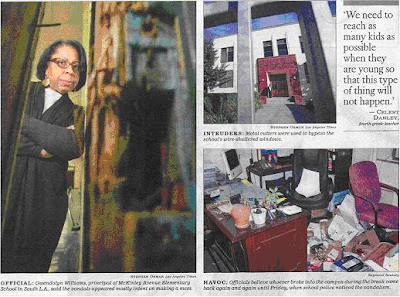 - in is wrapped with a spiked iron fence. Its windows are shuttered with wire frames and its offices are equipped with motion sensors linked to an alarm.

None of those measures, however, was enough to stop vandals who broke into the school during the holiday vacation.

Whoever it was -- officials suspect a group of adolescents -- used metal cutters to bypass wire-shuttered windows, broke into the school's boiler room, made his or her way into 13 classrooms, the library and several offices, urinated on floors, drew on walls, tossed ketchup and mayonnaise on computers, took a few electronics and generally torpedoed the school.

"Every time we have a long weekend or a long break, schools are hit," said Tony Gonzalez, local district director of school services. Gonzalez, who was on campus Wednesday as cleanup got underway, said the chaos left behind was the worst he had ever seen.

The break-in was one of nearly 60 reported incidents of vandalism in the last two weeks at campuses, said school Police Lt. Timothy Anderson. Break-ins ranged from seemingly professional operations, in which thieves targeted computers and electronics, to childish pranks, where an empty school became a playground for mischief-makers, he said.

L.A. Unified police say about 400 burglaries occur at campuses each year, resulting in millions of dollars in property damage and stolen equipment. During the 2006-07 winter break, authorities reported break-ins at 19 campuses; during the 2005-06 break, 63 were reported.

At McKinley, the damage was so extensive that school officials believe whoever broke into the campus during the break came back again and again until Friday, when school police noticed the vandalism, officials said.

The school has been vandalized several times, including a major break-in during the fall, said administrator Raymond Boutney, adding that he is frustrated by the "inability of the community to assist us in capturing the culprits who continue to do this to our school."

Officials still can't say why the school's motion sensors didn't trigger the alarm, Principal Gwendolyn Williams said. Some sensors were torn down and the main control system -- which should have set off the alarm before anyone got to it -- was tampered with, she said.

Empty schools and understaffed school police can add to the break-in problem, police said. staffing, with many officers on vacation, is "kind of thin to say the least," said. Last year, school police officials said about half of all break-ins took place during long weekends or the winter, spring and summer vacations.

Police are making moves to fight the problem, said. They've put up posters asking students to alert authorities to vandalism, and a recent grant will help them distribute magnets with the same message, he said.

Whether those programs will make a dent in the problem is unclear, officials said.

On Wednesday, rather than spend the day learning teaching techniques alongside UCLA writing experts, as was planned, teachers spent the day cleaning classrooms in preparation for Monday, when students are set to return.

They made quick progress in the morning hours -- painting over rows and rows of spray-painted pornographic images and derogatory terms in just minutes. The school became infused with the scent of ammonia as the teachers washed away signs of disruption.

"I have to get set up here quick. I don't want the kids to see it like this," said fourth-grade teacher Celest Danley.

Earlier in the day, she found papers tossed wantonly around her classroom, ketchup splattered on walls and broken bits of Christmas ornaments on the floor.

Although some laptops, VCRs, cameras and boomboxes were taken, it seemed that the vandals appeared mostly intent on making a mess, not taking valuable property, said Williams, who has headed the school for 12 years. Several new computers and other valuable equipment went untouched while a pile of notebooks filled with students' stories was destroyed with ketchup.

For Danley, the incident underscores the important role teachers have in shaping the lives of young people -- and deterring them from mischief.

"We need to reach as many kids as possible when they are young so that this type of thing will not happen," she said.

But it can be difficult to know what motivates someone to break into a school, Williams said.

Sandy Banks: CRIME IS RISING WHERE IT HURTS

Column by Sandy Banks from the Times

— On the same day that a smiling mayor and police chief stood side by side at a news conference hailing a citywide drop in crime, grim-faced teachers at a elementary school painted over obscenities on classroom walls, swept up broken Christmas ornaments and tried to salvage students' art projects.

Crime may be dropping on the streets outside, but inside Los Angeles Unified campuses, holiday breaks are criminals' party time.

According to an article this week by my colleague, Times reporter Paloma Esquivel, 60 campuses were hit by thieves and vandals during the Christmas break that's about to end.

At McKinley Avenue Elementary the burglars didn't steal much -- a few laptops, cameras, VCRs and boom-boxes. But they went on a rampage on the vacant campus, urinating on floors, dumping ketchup on computers and drawing pornographic images on classroom walls.

The 80-year-old building has motion sensors that should have tripped a silent alarm but didn't. Once the vandals made it over a spiked iron fence and snipped the wire blocking windows, they were free to roam the campus.

Now, school police are trying to find the culprits. In most school break-in cases, they turn out to be neighborhood teens. Police have put up posters, asking students to alert authorities to vandalism. And they're using grant money to distribute refrigerator magnets imprinted with that same plea.

During vacations, deserted schools are sitting ducks. Los Angeles Unified campuses are burglarized about 400 times each year, and almost half of those break-ins occur during the summer vacation, holiday breaks and long weekends all across the sprawling district.

Part of the problem is the district's puny police force. It hasn't been expanded in 20 years, even though the district has grown by more than 100,000 students and 70 campuses during that period.

L.A. Unified Police Chief Larry Manion has 362 officers and responsibility for more than 800 schools scattered over 710 square miles. His priority is keeping kids safe as they travel to and from school and while they're on campus, he said. "The vast majority of our officers work during the school day. That's what the community demands."

On nights and weekends, he's too short-handed to give campuses much patrol attention. "We don't have the troops," he said. Taking a page from Los Angeles Police Chief Bill Bratton -- who credits the city's crime drop to more officers on the streets -- Manion wants to double the size of his force within five years. But even then, he wouldn't have enough officers to watch district schools 24/7.

break-ins have become a criminal tradition, he said. "And 95% of the time, when a burglary is committed, it's accompanied by vandalism or some distasteful comments written on the wall."

School social worker Petra Galindo is often called on to counsel children -- and teachers -- who return from vacation to find their classrooms defaced. "You try to protect the kids from seeing it. It's so disruptive to the psyche of a school," she said.

I told her I was stunned by the viciousness of the damage at McKinley Elementary. Smearing ketchup on children's writing projects? Urinating on classroom floors? But Galindo said she has seen worse: "Feces smeared on walls. Incredibly racist and obscene scrawls."

The vandals are typically teens "with an ax to grind," she said. "If they don't feel respected, in terms of how they're interacted with at school; if they're not doing well, truant a lot, disconnected at home . . . any little thing can set them off.

"Holidays bring on a lot of depression and sadness for people who don't have that sense of connectedness," Galindo said. "The schools are empty, no one's protecting them. The kids go in there as a group, it escalates, things get out of hand. . . . It's violent anti-social behavior. Schools are an easy target."

School police sometimes collar the culprits. Officers nabbed four burglars inside Budlong Elementary in on New Year's Day and recovered $26,000 in stolen property. On Christmas Day, a silent alarm at Pio Pico Elementary drew officers "who caught the suspects in the commission of the crime," Manion said.

They could prevent more burglaries if all schools had security cameras and alarm systems that actually worked. "We'd like a monitor in every school, up and operable," he said.

District officials told me that most of the district's 700-plus schools do have "intrusion detection systems," though they couldn't tell me how many actually function. They're maintained by the district's information technology division, the same group that saddled school employees with a perpetually malfunctioning payroll system.

I guess it's too much to expect a district with a computer system that can't accurately pay teachers to provide campus security systems that are able to protect millions of dollars of equipment and students' priceless psyches.

If this kind of destruction were happening at churches or synagogues instead of schools, it would be considered a hate crime. City officials, civic leaders and law officers would be up in arms. But when vicious burglars rip through children's classrooms, we quietly hand teachers mops and ammonia and shrug it off as teenage vandalism.

I'm relieved that citywide crime is going down. But I wish politicians would stop patting themselves on the back long enough to figure out if there's a way to spread the good fortune to beleaguered schools and neglected students.

Last month, when he was stumping for endorsements for his reform plan, Mayor Antonio Villaraigosa bragged that he "raised 50 million bucks like that" to spend at schools that sign on. Two years ago, alarmed by housing project crime, the mayor persuaded Motorola to donate $1.2 million worth of surveillance equipment to monitor Jordan Downs.

Spring break is not that far down the line. We know the thieves have wire cutters. Let's give more than refrigerator magnets to school police to fight crime this time.