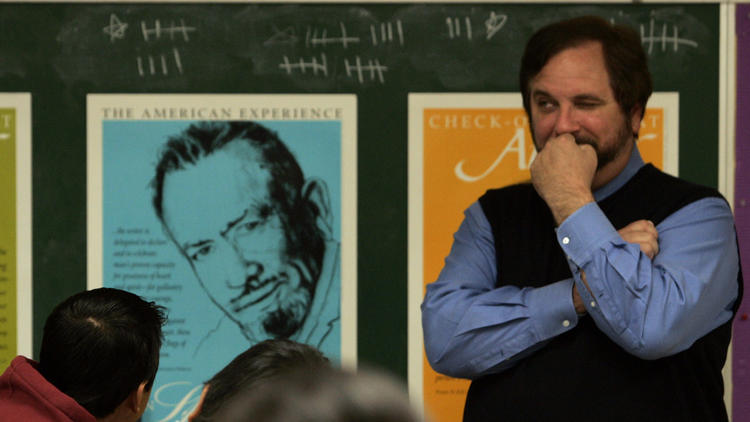 L.A. Unified teacher Rafe Esquith has been removed from the classroom as the district investigates misconduct allegations. (Los Angeles Times)

23 June 2015  :: From his modest classroom at Hobart Boulevard Elementary School in Koreatown, Rafe Esquith became an education superstar. His teaching techniques brought him worldwide recognition, and his books became models for how to engage young students.

But for the last two months of school, Esquith was sidelined. The Los Angeles Unified School District launched an investigation in March into allegations of misconduct by the popular teacher.

His attorneys said the investigation is related to comments about nudity that he made to students. In addition, they said L.A. Unified also is looking into Esquith's nonprofit, the Hobart Shakespeareans, a drama group for students.

The decision to put him on leave — and keep him there for so long — has outraged supporters. But district officials have not backed down, saying that regardless of his celebrity, they won't send him back to school until their investigation is completed.

The standoff comes as the school district struggles to recover after a series of scandals involving teachers and administrators accused of sexual misconduct with students. L.A. Unified last year paid a record $139 million to the victims of a Miramonte Elementary School teacher who was allowed to stay in the classroom even after complaints about his behavior with students.

Some see the Esquith case as part of the district's effort to reform in the wake of the scandals. But whether it is an overcorrection remains a matter of much debate.

In his first interview since he was pulled from his fifth-grade class, Esquith told The Times on Monday that controversy stemmed from a joke he made in the classroom.

He said he quipped with students that if he could not raise enough money for the annual Shakespearean play, they would all have to perform their parts naked like the king in Mark Twain's "The Adventures of Huckleberry Finn."

After another teacher complained, he said he explained the context of the joke to his principal at Hobart Boulevard Elementary. The principal, he said, told him he had nothing to worry about. Nonetheless, Esquith was removed from the classroom in April.

"We overreact to everything. That's the American way and I'm a victim of that overreaction," Esquith said. "I want to fix this system. I want to make sure that teachers do not have to go through the same thing that I went through."

Mark Geragos, an attorney for Esquith, filed a claim Monday against L.A. Unified, a precursor to a lawsuit. The claim gave notice of class-action litigation involving scores of teachers in similar situations who say they have been denied due process rights.

Since last June, 89 teachers and others have been taken out of the classroom pending an investigation.

Colleen Schwab, a vice president of United Teachers Los Angeles, said district officials have become so concerned with making sure that they do not miss serious crimes against children that the pendulum has swung too far in the opposite direction.

Schwab said L.A. Unified and the teachers union reached an agreement in April requiring that the district present teachers accused of misconduct with the allegations against them and that they receive speedy investigations.

District officials declined to provide details of the investigation, which Supt. Ramon Cortines said includes "serious issues that go beyond the initial investigation."

Cortines said in a statement last week that the district won't be "rushed to make a decision and will complete our investigation with the highest level of integrity. The safety and security of every district student will remain our No. 1 priority."

In an interview Monday, L.A. Unified General Counsel David Holmquist added that the school system will not sacrifice students' safety or a thorough investigation simply because the public and employees want a quick resolution.

"When it comes to student safety, we're going to choose students over adults every time," Holmquist said.

Education historian Diane Ravitch who has followed the debate over Esquith's removal, said that when such a nationally known instructor is removed from the classroom, the community expects answers.

"If the facts of the case are what's in public, it sounds absurd," said Ravitch, a research education professor at New York University. "If there are other things that haven't been revealed, then the district should reveal them so that people don't think they're making a very harsh and hasty decision."

Esquith, who has written three books, including "Teach Like Your Hair's on Fire: The Methods and Madness Inside Room 56," has received national recognition for his teaching abilities. He was the focus of a PBS documentary and won the National Medal of Arts award in 2003. At Hobart, which enrolls mostly low-income and minority students, he stresses the importance of the arts and the classics, including Shakespeare and Twain.

He has also criticized what he considers to be too much standardized testing and scripted teaching methods.

Esquith is being paid while he awaits the results of the district's investigation. It is expected to be completed before school starts in August.

He said district investigators never explained the allegation of misconduct lodged against him but said they were not short of questions when he was interviewed. They asked, for example, the names of teachers who may not like him, the women he dated in college and whether he was counseled as a teenager for pushing someone at summer camp.

"I asked them, 'Have you talked to my students?' and they absolutely said to me, 'We're only looking to talk to people who don't like you,' " Esquith said. "It just seemed incredibly unfair."

In the claim against the district, Esquith's attorneys said the investigation has now turned to the Hobart Shakespeareans, which performs a Shakespeare play annually, offers field trips and provides free SAT preparation.

Board members for Esquith's nonprofit sought legal counsel after investigators began asking questions about permission slips, whether the organization clearly indicated that it was not affiliated with the district and the number of chaperons taken on trips.

District officials this month required Esquith to cancel a trip with students to attend the Oregon Shakespeare Festival. In a letter to him, officials said the trip had not been authorized or sponsored by L.A. Unified.

"It's clear that the initial allegation was this Mark Twain passage … they realized that they hit a dry hole on that and now they are doing anything and everything to come up with something to justify this because they realize that they have egg on their face," Geragos said.

After more than three decades teaching, Esquith said, he simply wants to get back to the classroom to be with his students.

"I have had many friends say, 'You know what Rafe: Enough is enough. Get off the cross, go into the private sector and make a lot of money,'" Esquith said. "It's tempting, but you haven't seen the damage done to my classroom. You haven't seen the mail that I've gotten from these kids. I have to go back to heal them."