CAMI ANDERSON IS OUT AS NEWARK SCHOOLS SUPERINTENDENT 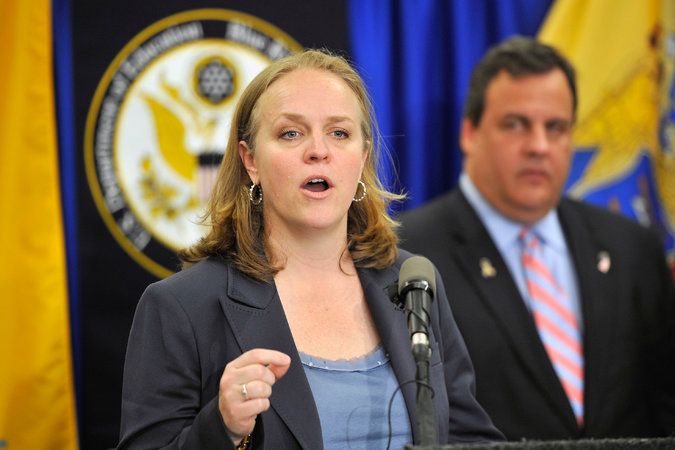 JUNE 22, 2015  ::  Cami Anderson, the superintendent of the Newark public school system who became a lightning rod in the debate over education reform in New Jersey and nationally, resigned on Monday, eight months before her contract was to expire.

An adviser and longtime friend to former Mayor Cory A. Booker and appointed by Gov. Chris Christie, Ms. Anderson had been hounded by protests from students, parents and local leaders for more than a year. She had feuded openly with the city’s populist new mayor, Ras J. Baraka, a former high school principal who was elected last year on a promise to return Newark — and its schools, which have been under state control for 20 years — to Newarkers.

Ms. Anderson was appointed in 2011, just as a $100 million grant from the Facebook founder Mark Zuckerberg had set up the long-troubled school district — the state’s largest, with some of the nation’s most disadvantaged children — to become a national model for change. Ms. Anderson, 43, used some of that money to establish merit-based pay in a teachers’ contract that was hailed even by national unions as a groundbreaking compromise.

She resisted the push by Mr. Booker, a Democrat who is now the state’s junior senator, and Mr. Christie, a Republican, to expand charter schools, fearing aloud that they drained motivated families and money from traditional schools. But she also alienated many parents with her reorganization plan, known as One Newark, which replaced the city’s tradition of neighborhood schools with a universal enrollment system that assigned students by lottery to traditional as well as charter schools. It resulted in school closings, mass firings of teachers and principals, and more students in charter schools, which aggravated complaints that Ms. Anderson was catering to wealthy ideologues with misguided ideas about how to improve urban education.

The debate in Newark did not center as much on the issues of testing and the Common Core standards that roil many suburban school districts. But in its swirl of jargon and personal acrimony — a parent at a meeting once asked Ms. Anderson, the white mother of a biracial child, why she did not want the same for Newark’s “brown babies” as she did for her own — the fight over her tenure is emblematic of the bitter national debate about how to educate American students for a more competitive world.

Self-described reformers argued that Newark schools spent too much for too few results, and that charter schools had shown they could do better; per-pupil spending in the public schools was about $24,000 when Ms. Anderson arrived, and the teachers were among the nation’s highest paid. But many parents, teachers and local politicians complained that she failed to listen to community residents who just as badly wanted a better education for their children in public schools.

Randi Weingarten, who as the president of the American Federation of Teachers personally oversaw negotiations over the Newark contract in 2012 and hailed it at the time, on Monday called Ms. Anderson’s departure “an opportunity to undo the many mistakes made under her leadership.”

The resignation was a victory for Mayor Baraka, a Democrat, in his long fight with the superintendent. But he was muted in a public statement, calling it “the first of many steps needed to regain local control of Newark Public Schools.”

“Our ultimate objective is local control of our schools, and we will continue to work diligently and fervently towards this end,” he added. “This is an opportunity for transition and we want to be able to return control to parents to make decisions affecting their children’s education.”

Ms. Anderson had argued that One Newark would offer more parents the opportunity to opt out of failing schools, and that by improving the smaller number of public schools that remained, it would ultimately help retain the families that might otherwise leave the district for charter schools. Parents, however, complained that she had not solicited their input before doing away with neighborhood schools.

Ms. Anderson’s relationship with local leaders had gotten so bad that in January 2014, she stormed out of a meeting of the advisory school board, where parents had whistled and chanted “Cami, go home.” She announced that she would no longer attend because the board was “no longer focused on achieving educational outcomes.”

The mayor had expressed support for high school students who staged sit-ins and marched through downtown Newark calling for Ms. Anderson’s removal.

In a statement on Monday, Ms. Anderson said that she was “extremely proud” of her accomplishments, citing the teacher contract, an increase in graduation rates — to 70 percent, from 56 percent — and “improved access to schools” through One Newark.

She added, “I hope my work in Newark will serve as an important road map for school districts across the country that are working to provide excellent schools for all students.”

As recently as a year ago, Mr. Christie had scoffed at Mr. Baraka’s call for Ms. Anderson’s ouster, saying that he told the mayor, “I’m the decider, and you have nothing to do with it.”

But in recent days, some local leaders said that they had been told that Mr. Christie would give the advisory school board some role in approving a replacement for Ms. Anderson.

Mr. Christie’s office referred comment to the state education commissioner, David Hespe, who said in a statement that Ms. Anderson had “worked tirelessly over the last four years to implement a bold educational vision for the students and parents of Newark.”

Ms. Anderson said in her statement she believed the time was right to return to local control.

State and city officials, however, said only that Mr. Christie and Mr. Baraka would offer more details soon, as Mr. Hespe’s statement said, “to establish a common vision and path forward for the future of the Newark Public School District.”

Critics who pushed for Ms. Anderson’s removal may find they disagree as much with her successor. Mr. Hespe said the governor intended to nominate Chris Cerf, the former state education commissioner who helped recruit Ms. Anderson, to replace her. Both served as top administrators in the New York City public school system under Chancellor Joel I. Klein.

Mr. Cerf, a Democrat who clerked for Justice Sandra Day O’Connor on the Supreme Court and worked in the Clinton White House, pushed many of Mr. Klein’s most controversial education changes, expanding charter schools, closing failing schools and using test scores to evaluate and compensate teachers. He was most recently the chief executive of Amplify Insights, a wing of an education consulting firm run by Mr. Klein.