With fewer than 300 students enrolled, the high school is too small to be financially sustainable, schools chief John Deasy says. "He hasn't even visited our school or given us a chance,"  a student claims. 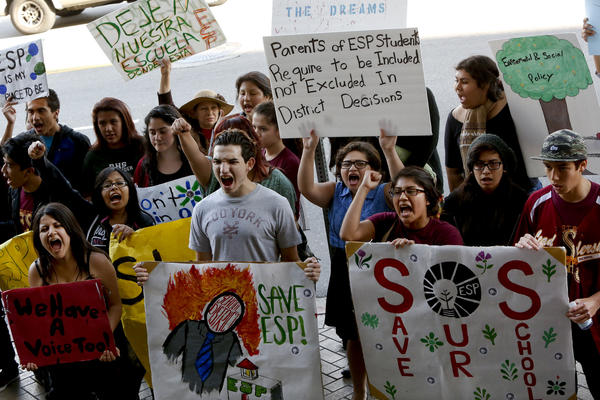 March 2, 2014, 7:40 p.m.  ::  When Catherine Aleman and Ana Renteria learned that L.A. Unified might move or close their small school in East Los Angeles, they did what the Academy of Environmental and Social Policy had taught them to do: They tried to make a difference and organized a protest.

The students said the academy — an offshoot of Roosevelt High School in Boyle Heights — transformed their lives. The small campus has created close ties with students and teachers who push them toward college and stay after hours to help them with challenges such as Shakespearean prose.

The attention has helped both students maintain "A" averages even with college-level Advanced Placement courses. Overall, the school has increased its graduation rate and math and English test scores, and its gains on a widely used measure of academic quality were among the district's highest in the last two years.

The school has also vastly broadened student horizons with outdoor club trips to Mono Lake and other places for hiking, skiing and snowboarding — Aleman's first experiences with such adventures.

"Here, teachers grab you by the hand and help you up," Aleman said. "We know as a small school … nobody is going to be left behind."

But the protesters' petitions and a spirited march to L.A. Unified headquarters last week came to naught. On Friday, district officials told Principal Brendan Schallert that the school will be relocated to Lincoln High School this fall because its enrollment is too small to be financially sustainable. Its current location at the East Los Angeles Skills Center doesn't give it room to grow enough, officials said.

In an interview, L.A. Supt. John Deasy said that schools need to have at least 425 students to receive enough per-pupil state funding to run a full academic program. With the academy's enrollment of 280 projected to decline even more next year, he said, the district has poured millions of extra dollars into the school but can no longer afford to do so.

"It's an excellent school — this has nothing to do with the quality of the school at all," Deasy said. "But high schools under 200 (students) aren't fiscally sustainable."

Once the darling of urban school reform, small schools began proliferating nationwide — especially after the Bill & Melinda Gates Foundation invested $2 billion in hundreds of them beginning in 2000. Roosevelt did not receive foundation dollars, but joined the movement by breaking up what had been a 5,000-student school into seven smaller campuses in 2010 to promote more personalized student attention. The environmental academy, however, had already moved offsite in 2007.

The Gates Foundation cooled toward the idea of small schools after research found that they did not significantly improve student achievement. Some of Roosevelt's campuses, however, showed promising results — including steady academic gains at the environmental academy.

But continued declines in enrollment there and at other Roosevelt campuses have made the experiment too costly, according to both Deasy and officials with the Partnership for Los Angeles Schools, the nonprofit that oversees Roosevelt and 14 other low-performing schools started by former L.A. Mayor Antonio Villaraigosa. Last year, the partnership reorganized Roosevelt again from seven campuses to three.

Deasy said the district will support the environmental academy's efforts to grow at Lincoln High by making it a magnet campus this year, which will allow it to recruit students beyond Boyle Heights. To ensure safe passage for students — some of whom fear crossing into a different gang territory — the district will also provide transportation to Lincoln, Deasy said. And the academy's full teaching staff will be retained next year even if enrollment drops further, he added.

Schallert said he appreciated the district's offers but said many students, parents and teachers had serious concerns about the move. Several said they planned to speak out at the L.A. Board of Education meeting Tuesday.

Dolores Flores said her daughter was physically beaten and bullied at her previous school but has thrived at the close-knit academy, which features student pledges against bullying on a prominent hallway display.

"They have no gangs here, no threats here," Flores said. "The students are productive and happy. I don't understand why you would change things."

James Lotter, an English teacher who helped start the academy, challenged the district's financial claims, saying the school has not drained the district of extra dollars. Four teachers and a part-time counselor are being paid with state funds for low-performing schools, and the school has cut transportation costs by three-fourths, according to academy staff.

And many students wondered whether their academy will survive the move to Lincoln. Several said they would not move because of ties to Boyle Heights, fear of crossing gang lines and reluctance to return to a large campus.

Rentaria, a junior, said she would move to Roosevelt's main campus next year despite problems with its size because she will not abandon her identity as a Rough Rider. Then she began to cry, saying Deasy never bothered to seek out the voices of students and parents before making the decision.

"He hasn't even visited our school or given us a chance," she said.

smf: Beyond the usual complaint of the District and its superintendent making decisions without consulting parents and students – or even bothering to visit the campus -  there are a couple of other unmoving parts that should concern us here: