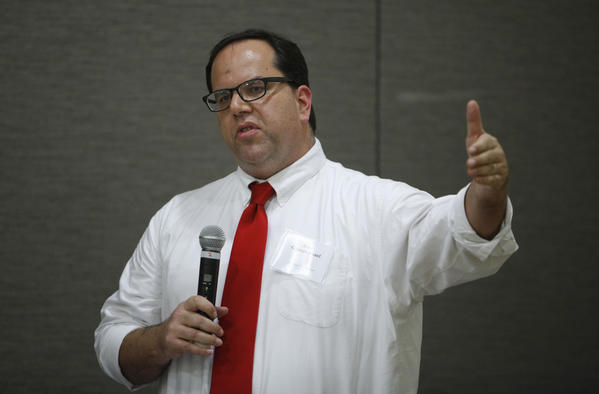 March 14, 2014, 11:41 a.m.  ::  Los Angeles school district officials say one of the top candidates for president of the teachers union faces discipline for leaving his campus to campaign during the school day.

The issue has entangled L.A. Unified in a contentious union race with high stakes both for teachers and the nation’s second-largest school system.

Alex Caputo-Pearl, 45, is one of nine challengers to Warren Fletcher, who is bidding for a second and final three-year term. Mail-in ballots will be counted March 20.

Caputo-Pearl, a social studies instructor, visited other campuses during the school day by taking unpaid time on parts of 43 days during the current academic year, according to the district.

Caputo-Pearl said the missed hours added up to 17 days. Most of those hours, he added, were during a portion of the day when he was not scheduled to supervise students. The veteran instructor added that he had the permission of his principal to be off campus. He cited a provision of the union contract that gives a principal discretion to grant unpaid time off.

Two candidates for other offices also have used unpaid time, although to lesser extents. Some past UTLA candidates have done the same, according to some longtime UTLA activists.

The contract does not explicitly ban taking time off to campaign, but the district ordered a stop to the practice.

“Campaigning for an elected UTLA office is not an option for a leave of absence,” wrote Justo H. Avila, a human resources official, in a Feb. 27 letter to Fletcher. “Our principals do not have the authority to grant such leaves.”

By that point, Caputo-Pearl already had been warned personally to remain on campus, said L.A. schools Supt. John Deasy. But Caputo-Pearl left campus on parts of three days after that admonition, Deasy said.

Violating a directive subjects a teacher to discipline, said the superintendent, adding that he cannot reveal any disciplinary action taken against a particular teacher.

Caputo-Pearl said that the district’s allegations that he violated rules are inaccurate. Officials said they learned of the issue after other challengers complained that they’d been unable to get time off, and that Caputo-Pearl had an unfair advantage. Some objected to any candidate being able to leave school.

Caputo-Pearl said the unpaid time helped him even the odds against two candidates with no classroom obligations: Fletcher and union Vice President Gregg Solkovits.

Caputo-Pearl works this year in the alternative program at Frida Kahlo High School in South Los Angeles. Students there typically work independently on different courses. Caputo-Pearl manages about 10 different academic programs at the same time. But he also receives extra paid planning time. The result is that he supervises no students between 12:45 p.m. and the end of the school day at 3 p.m.

To visit teachers elsewhere, Caputo-Pearl handled his planning after school hours and forfeited his pay for the missed time.

As for missed classroom periods, Caputo-Pearl said he entrusted his students to two substitutes with whom he’s worked for 10 years.

Deasy said the district should never have to pay a substitute for time spent campaigning.

“When your duties are done for which we pay you, campaign your hearts out,” Deasy said. “In the meantime, please teach.”

Caputo-Pearl, a longtime community organizer as a teacher at Crenshaw High, has a stormy history with district officials. When Deasy ordered Crenshaw reorganized because of low test scores, Caputo-Pearl was removed, despite his reputation as an effective teacher.

He has the support of 250 local school union representatives, among others.

The union has battled the district over the direction of reforms, including such matters as how teachers should be evaluated and whether performance or seniority should govern layoffs.

Most of Fletcher’s challengers say he hasn’t offered enough resistance to Deasy or fought hard enough for an alternative vision for education.