KOCH BROTHERS TO PURSUE CONTROL IN THE MEDIA

Koch Industries wants to change the way the mainstream media portrays them, feeling that they have been unfairly covered due to their political beliefs. 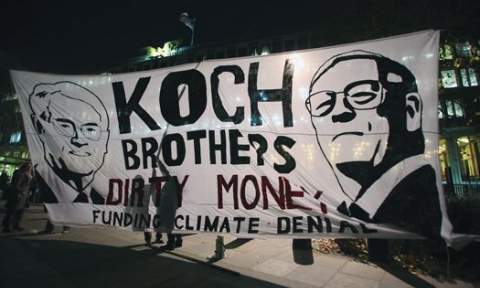 Monday 22 April 2013   :: We know the Koch Brothers, Charles and David Koch, as deniers of climate change, billionaire oil moguls, and environment destroyers, but now we may know them as major newspaper controllers. Until now Koch Industries has avoided investments in media. However at a recent annual seminar in Aspen, it was discussed that Koch Industries purchase the entire Tribune Company or at least the bundle of eight newspapers, valued at $623 million. The purchase would put the Koch brothers in charge of a large chunk of America’s largest print media, including newspapers like the Chicago Tribune, The Los Angeles Times, and the second-largest Spanish-language daily newspaper, Hoy.

The plan to finally invest in media is part of the Koch brothers’ plan to influence media narrative and convince Americans that a smaller government is better. Currently they feel that “the conservative voice is not being well represented” in the media. Acquiring power in the media comes with a three-pronged strategy that was unveiled in Aspen three years ago. The plan has three prongs*, educating grass-roots activists, influencing politics, and media, in order to push the country towards a smaller government in which there is less regulation and taxes. The first two have already began to be dealt with, as we have seen from the millions they have poured into getting their own legislative agendas passed and their funding of ALEC [American Legislative Exchange Council]. They have even gone as far as warning thousands of their employees of the consequences they will face if they didn’t vote Republican in the latest election.

According to unnamed sources that attended the seminar, the goal is for the Koch brothers to have “their voices being heard.” Koch Industries wants to change the way the mainstream media portrays them, feeling that they have been unfairly covered due to their political beliefs. They are not fans of how the freedom of press has allowed for them to be represented and the easiest way to change this is to control the media itself.

If the Koch brothers succeed in the large purchase of all, or parts, of the Tribune Company we can be sure that there will be significant changes to the major print sources they will control, creating another significant outlet for their conservative agenda.

* smf: A three pronged strategy with not one, not two, but three prongs? Imagine!