L.A. UNIFIED OKs $1.6 BILLION IN CUTS OVER THREE YEARS: Plan makes layoffs more likely for 4,000 teachers and staff, though union leaders are trying to save jobs. 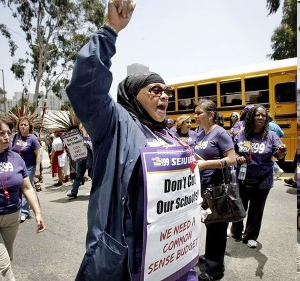 
June 24, 2009  - The Los Angeles Board of Education on Tuesday approved nearly $1.6 billion in cuts over the next three years that will result in layoffs and increased class sizes and could one day mean the elimination of such key programs as all-day kindergarten and summer school. The action also makes it increasingly likely that many of those targeted for layoffs, including about 2,200 teachers and up to 2,000 school staff, such as custodians and cafeteria workers, will be dismissed, although union leaders said they are still negotiating to save jobs.
Including the latest reductions, Los Angeles Unified School District officials have now slashed almost $700 million -- or about 10% of the district's operating budget -- from this year's books, which includes federal grant money and other funding. Programs, including most summer school offerings and arts education, have already been scaled back due to funding shortages.

"Passing this budget makes me sick to my stomach," said Yolie Flores Aguilar, one of five board members who approved the budget.
Marguerite Poindexter LaMotte and Julie Korenstein voted against the proposal.
The cuts include about $132 million for the district's current fiscal year, which ends this month, and about $143 million for next year. In an effort to preserve funding for instruction, district officials approved taking money from such areas as teacher training, professional development and transportation.

The potential cuts would increase substantially for the next two years. Then, in 2011-12, when federal education stimulus money is scheduled to run out, district officials project that they will have to slash the budget by about $844 million.

The officials warn that if L.A. Unified does not receive additional funding by then, or get concessions from its unions, including shortened work schedules and pay cuts, programs such as summer school and full-day kindergarten would have to be canceled.

Most summer school offerings were canceled for this year, saving the district almost $34 million.

Teachers union officials have not agreed to any pay cuts or scheduling changes, said President A.J. Duffy, who said he hopes to avoid layoffs. But Duffy said the latest reductions would have a devastating effect.

"The quality of education in this district will most assuredly go down," the union chief said.

Teachers union officials have harshly criticized the district's handling of the budget crisis, holding rallies and hunger strikes. They have urged the district to use additional federal stimulus money this year to save teaching positions, and not to allow individual schools to use the funds to pay nonteaching staff.

Supt. Ramon C. Cortines and others have said that it would be irresponsible to spend all of the federal money at once and that giving school staff more autonomy will help cut bureaucracy at district headquarters. Excess staffing is partly to blame for L.A. Unified's budget problems, district officials have said.

L.A. Unified officials are required to submit balanced budgets for three years at a time and Cortines acknowledged that some of the projections contained in the latest document were not concrete. Several board members said they had no choice but to vote for the plan Tuesday, but that they would not approve some specifics later on.

Cortines and union officials are pressing state legislators to allow districts to submit fewer than three years of balanced budgets at a time.

The superintendent, who fought for composure recently when discussing the dire state of the budget, has also suggested that the school board consider putting a parcel tax on next spring's ballot to provide more funding for schools.

"It will be difficult for the community to support a parcel tax but we have no choice," he said.

Some board members said they doubted that the public would support another tax and urged district officials to find other revenue sources by selling property or other assets.

Cortines also said the district's unions have been unwilling to offer concessions. "I have not received any alternative solutions from our collective bargaining units," he said.

Union leaders have said they have negotiated in good faith.

Board member Korenstein, who is retiring after more than 20 years on the board, said she had hoped to end her tenure on a more positive note.

"It is the worst of all times," she said.