Los Angeles school officials have finally selected a leadership team for a new downtown arts high school that is intended to become a national model for teaching dance, theater, music and visual arts to underprivileged students.

After a lengthy, and ultimately fruitless, nationwide search, Los Angeles Unified School District officials turned inward to find a principal and an executive director for the school, which occupies a striking $232-million campus overlooking the 101 Freeway downtown.

The new team announced Friday -- Principal Suzanne Blake from Vista Middle School in Van Nuys and executive director Rex Patton from Coeur D’Alene Elementary School in Venice -- face a daunting task. In a little more than four months, they are expected to hire a teaching staff, finish designing a curriculum, plot  a schedule, evaluate students, reach out to private donors and partners, and open the doors in time for the beginning of the school year in September.

●● 4LAKids congratulates Principal Blake – Our spies (who are not quite everywhere enough!) report that she is the right person at the right time, ideally suited for this very high profile and challenging job!

LA Times: Letters to the editor 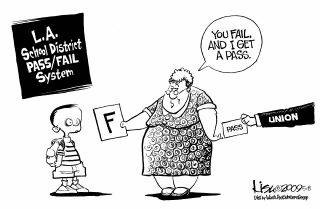 Not a class act: The same cartoon appeared in the LA Times & Daily news today!


Re “Failure gets a pass: Teachers who don’t teach,” May 6

I read about the teacher who pulls down $73,500 a year for doing nothing. I can save the school district a lot of money. I am willing to do nothing for $50,000. OK, $40,000, but that's my last offer.
As a longtime supporter of unions -- including the teachers union -- I am appalled to see what can only be described as an outrageous abuse of power, protecting teachers who misbehave and/or fail to teach ... not to mention a colossal waste of money.
Nancy Kaneshiro

•
As a student brought up in the LAUSD system, I had always assumed that the administration had my best interests in mind and that teachers were put under as much scrutiny as California state standards have put on my academic ability.
Most shocking were the lines from the article: "The administrator was faulted for making too many observations" and "in 80% of the dismissals that were upheld, classroom performance was not even a factor."
At no point have I ever seen administrators or observers evaluating my teachers' performance.
Adults tend to dismiss the comments of students with the rationale that students tend to derive these evaluations from personal vendettas. If the greatest impact of a teacher's ability is on students, then why are our evaluations not valid criticism?
Noah Gentile
Los Angeles

The writer is a high school junior.


When will we say "enough is enough" and start doing something about getting rid of inept teachers for the sake of our children? San Marino Unified School District, one of the best in the state, passed out layoff notices to teachers that have "no relationship to performance," according to a school district document.
The school district keeps telling residents that there is nothing they can do about it. Supposedly, residents don't understand the law, contracts and unions.
Andrew Ko
San Marino
•
Your recent slew of articles about the LAUSD's policies create the misconception that every school district is like the LAUSD. By always putting the LAUSD and union President A.J. Duffy in the national spotlight, the public incorrectly assumes all school districts work this way. I believe you do a disservice to the rest of California's teachers and school districts by making this implied comparison.

•
My son has gone to public school all his life, and, for the most part, his teachers have been wonderful. (He's now in 10th grade.)
Nearly every year, however, there is at least one teacher who is really rotten. Take the replacement fifth-grade teacher who was physically and psychologically abusive. She was finally removed after throwing a pair of scissors at a student. Just last week, in an unrelated Times article, I saw her quoted. She's currently teaching at a different LAUSD elementary school.

I understand that stories about bad teachers have a definite reader appeal, but did you really need to run this series during Teacher Appreciation Week?
Granted, stories of teacher success and dedication don't elicit the reader outrage that the media feed on, but you could have recognized this week in a more appropriate way.
Even ignoring it would have been better.
Kurt Page
Laguna Niguel

"Housed" teacher Thomas Shelden has never at least hit on the idea of undertaking chores for a charitable organization, even from his home, instead of napping and watching Fox News and movies?
William Rogers
Burbank
•

A letter writer wonders why the news about teachers is always negative. There is an old saying, "A house that is not on fire is not news." There are a million teachers in this country. You can't make a big deal out of them doing what they are supposed to do and what they enjoy doing.
John Waugen

Why grade teachers solely by student performance? Place a minimum of two cameras in each classroom and someone to randomly audit the videos to review every teacher's demeanor, adherence to curriculum and ability to communicate. It will be expensive at first, but how much are the taxpayers paying to keep teachers at home with full pay now?

DOWNTOWN LOS ANGELES - After months of searching for a principal to lead the $232 million High School for Visual and Performing Arts, the Los Angeles Unified School District will announce Friday morning that it has hired Suzanne Blake to head the facility.

Blake will leave her position as principal at Vista Middle School in Van Nuys, an LAUSD spokeswoman said.

The selection comes after the district offered the job to principals of two high-profile East Coast arts high schools; both declined.

The school is set to open in September under district control, after Supt. Ramon Cortines and Local District 4 Supt. Richard Alonzo blocked an effort by a coalition of education leaders to turn the school into a charter.

Cortines and Alonzo have faced staunch criticism from charter supporters who argue that the district botched the planning of the school. District officials countered that the process was delayed by the battle for control of the school, and now that a principal is hired, Blake can proceed in devising an arts curriculum and hiring staff.

LOS ANGELES — The Los Angeles Unified School District responded with two news releases this weekend in response to a story in the Los Angeles Times that shows how hard it is to fire an incompetent teacher in California.