March 3, 2009 -- A new Field Poll shows that California voters are dissatisfied (55 percent) with the state budget passed by

the Legislature last month. Those likely to vote in the May 19 budget special election are even more unhappy (65 percent).

The plan contains a broad swath of tax hikes and deep spending cuts.

Come to think of it, who are the 45 percent of the people satisfied with that budget?

The same poll shows initial support for all six items on that ballot.

Of course, support for Proposition 1A, the spending restriction measure which would extend the life of the tax increases, plunges by 23 percent when voters are told about the tax provision.

Lawmakers must have accidently left that out.

That's not what the odd-couple of the month -- the conservative Jon Coupal of the Howard Jarvis Taxpayers Association and the liberal Anthony Wright of Health Access -- think. They teamed together Monday to sue to change the ballot summary for the measure.

They even got a letter of support from UC Berkeley professor George Lakoff, he of Don't Think of an Elephant fame.

Umm, wasn't that the point? 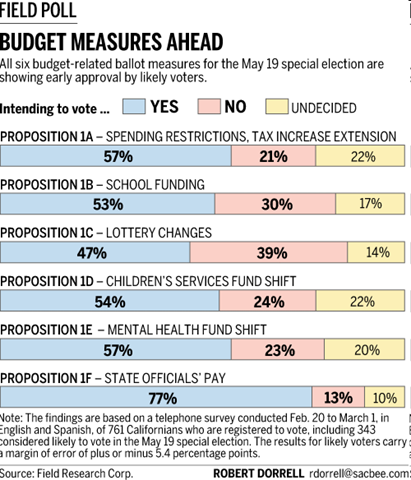 We've posted each of the propositions' polling numbers [following] And, as usual, Capitol Alert has the Field Poll's exclusive statistical tabulations [also follows]

Other poll highlights: 18 percent of voters think the state is headed in the right direction. The same percentage approves of the job the state Legislature is doing. Schwarzenegger's approval held steady at 38 percent since last September. The open-primary ballot measure on the 2010 ballot gets first-blush support from 58 percent of voters.

An itsy-bitsy fraction of the city's electorate will head to the polls today, when Los Angeles Mayor Antonio Villaraigosa is expected to waltz into a second term.

The Field Poll asked voters their initial position on each of the measures. Below are the results:

Likely voters in May special election
Yes: 57
No: 21

Proposition 1F (No raises for officials in deficit years)
Registered voters
Yes: 74
No: 17

March 3 Field Poll Results
Publish at Scribd or explore others: Other Research may 19 california election
Posted by smf at 1:17 PM