DEALING WITH THE LATINO EDUCATION CRISIS

Dealing with the Latino Education Crisis

3/3/2009 -- For Patricia Gandara, Co-director of the Civil Rights Project at the University California at Los Angeles, the educational outlook for Hispanics is grim: Although Latinos are the largest and fastest-growing minority group in the nation, they drop out of high school at alarming rates and have made virtually no progress in the level of college completion in the last 30 years. 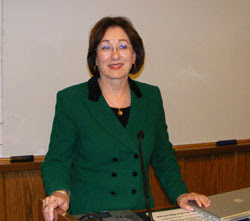 During a lecture at Teachers College on February 26, Gandara said that the percentage of 25- to 29-year-old white Americans attaining a bachelor’s degree or higher increased from 24 to 34 from 1975 to 2005. The numbers for Hispanics, however, remained essentially flat, increasing only from 9 to 11 percent over those same 30 years. Meanwhile, Latino communities have become among the most segregated and isolated throughout the Western states, and half of all Latino babies are now born to single mothers.

“These are very sobering statistics,” Gandara said, who co-authored the recently published The Latino Education Crisis: The Consequences of Failed Social Policies (Harvard University Press, 2009) with University of Washington colleague Frances Contreras. “This really is a crisis and not just for this population or for states with high Latino populations like California or Texas—it’s a crisis for the nation.” 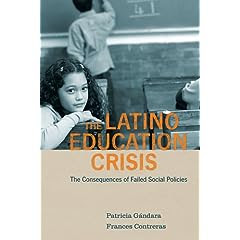 Gandara, who is a former bilingual school psychologist and director of education research for the California Assembly, said that over the years policymakers have placed far too much emphasis on the fact that a large numbers of Latino students have limited English skills. That emphasis, she said, has obscured the much deeper problems of “inadequate schooling and harsh social conditions,” and has led to misguided policies.

She noted that Arizona now requires students with limited English skills to receive four hours of English-only instruction. “The problem with that is that if I stand here and speak to you in Russian for the next four hours, about five minutes into the conversation you are going to tune out and go get some coffee. So this focus on language as the problem has led us down a pathway away from improving education for Latinos.”

There are, she said, steps schools can take. Gandara called on school systems serving Latino students to establish high-quality preschools, hire teachers who can speak Spanish and are familiar with Hispanic culture, and develop dropout prevention and college access programs. But she said that schools alone won’t solve the looming crisis. There are steps that only state and federal governments can take, including providing adequate health care and social services, full financial assistance for students from low-income backgrounds with incentives for them to become teachers in high-need areas, and establishing initiatives that break down the housing barriers that have isolated Latino communities.

For Gandara, the Latino educational crisis has ominous implications for the country. She said that some economists have predicted a downturn in the economies of those states with high Latino populations if something is not done immediately to reverse these trends.

In California alone, she said, the estimate is that per-capita income could drop by as much as 11 percent by 2020 because of the inability to develop a highly educated workforce. The country, meanwhile, could face a two percent decline in per-capita income. “This is what happens if we don’t do something now,” Gandara said. “My book is a call to action that we must do something—or face the consequences.”

Gandara’s lecture was sponsored by the Faculty Working Group on Latin American Migration at TC and the Institute of Latin American Studies at Columbia University.