PUBLIC-SCHOOL MOMS ASK: WHAT ABOUT EDUCATION?

From the LA Times Homeroom Blog

October 22, 2008 -- More than 10,000 people are gathering today at the Long Beach Convention Center for the Governor’s Conference on Women, which began more than two decades ago as a government initiative for women who are small-business owners and working professionals. 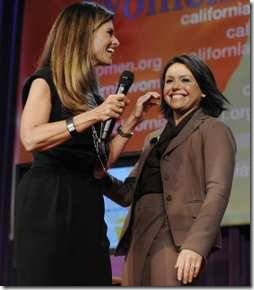 We are a growing group of Burning Moms (California public school moms whose fingers are literally singed with all the baking we’re doing to keep our kids in art, music, PE programs and more). This year, we decided to celebrate the Conference on Women’s inspiring theme of self-empowerment by:

1) Not bumming out over the fact that California’s governor and first lady do not consider public education a women’s issue. (Topics covered in the conference included finance, enterpreneurship, leading an authentic life, looking one’s best and reducing stress.)

2) Not bumming out over the fact that tickets began at $125 for obstructed view (up to $3,000 per table), money that could do SO MUCH for our struggling California public schools.

3) Being cheerfully proactive by holding our own festive pro-public-school rally on Pine Street by offering (mostly) home-baked muffins to incoming conferees, with a welcome flier. We were forced to celebrate California public schools on Pine Street because the police kicked us off the conference hall outdoor landing where more of the conferees were. The police told us the Governor’s Conference on Women had leased the Long Beach Convention Center, hence the actual Governor’s Conference on Women was a non-free-speech/public-protest zone. Duly noted.

4) Our hope is for our public-school volunteer moms in the building to get a photo of Maria Shriver wearing a: "Hello! Ask me why I’m a BURNING MOM" button, and also to get Gloria Steinem to accept a muffin. Read on to see the flier we attached to the muffins. (Admittedly, many of the women declined the muffins as they seemed to be on diets -- but why? They all looked so fabulous!)

Burning Moms (and Dad) united on the street, in the Free Speech zone.