Friday, October 03, 2008 - LEIMERT PARK (KABC) -- It's been two weeks, since 12-year-old Mercedes Hearn became the innocent victim of a gang related shooting. She spoke out about the suspects that shot her and delivered a sobering message about school safety on Friday.

Mercedes Hearn, 12, is still recovering after suffering three gunshot wounds. She was shot twice in the leg and once in the chest.

"I feel as if they should of never shot me. I am not a gang banger -- none of that. I stay in the house. I do not even know the people that shot me," said Hearn. 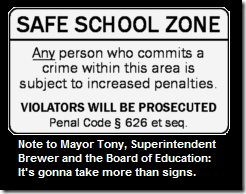 Mercedes was one of two people wounded two weeks ago after a Friday evening football game at Washington Prep High School in Athens. Authorities say it was a gang-related shooting.

Mercedes and a 19-year-old former Washington Prep student were seriously wounded. Four suspects were arrested the next day.

"I felt that my kids should of had more safety there. The school should of had metal detectors or something. They know the area that they are in and that it is really bad," said LaShauna Hearn, the victim's mother.

Mercedes attends Audubon Middle School. She hopes to be well enough to return to class soon. Her emotional wounds may take longer to heal.

"I am scared to get shot again. What they did to me was wrong. I had nothing to do with that. I hope that the police catch them. I hope they go to jail for life," said Mercedes Hearn.

The LAUSD says that in the last couple of years they have added additional school police. And patrols have been increased in the area around Washington Prep.

Superintendent David Brewer says that one of the biggest problems the district faces is safe passage to and from school. He says once the kids are at school, the campuses are ten times safer than the surrounding neighborhoods.