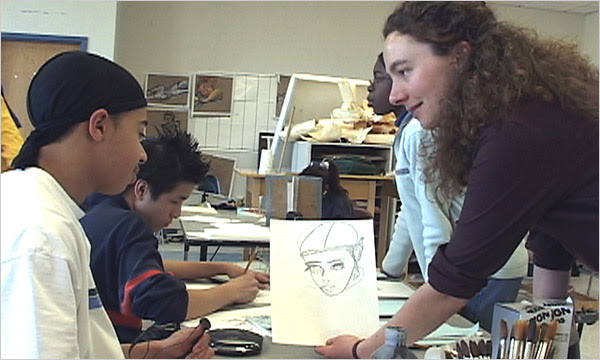 Beth Balliro, right, discusses an artwork with a student.

When two researchers published a study a few years ago concluding that arts classes do not improve students’ overall academic performance, the backlash was bitter. 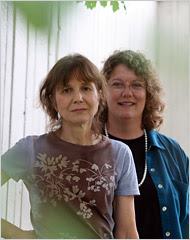 Some scholars argued that the 2000 study’s authors, Ellen Winner and Lois Hetland of Project Zero — an arts-education program at the Harvard Graduate School of Education — had failed to mention some beneficial effects of arts classes that their research had revealed. Others cited findings that reached the opposite conclusion, indicating that students who take high-quality art classes indeed do better in other courses. Some even accused the authors of devaluing arts education and the arts in general.

But Ms. Winner, Ms. Hetland and two other collaborators are pushing back. In a new book due out this month, they argue forcefully for the benefits of art education, while still defending their 2000 thesis.

In their view art education should be championed for its own sake, not because of a wishful sentiment that classes in painting, dance and music improve pupils’ math and reading skills and standardized test scores.

“We feel we need to change the conversation about the arts in this country,” said Ms. Winner, a professor of psychology at Boston College and a senior research associate at Project Zero. “These instrumental arguments are going to doom the arts to failure, because any superintendent is going to say, ‘If the only reason I’m having art is to improve math, let’s just have more math.’ “

“Do we want to therefore say, ‘No singing,’ because singing didn’t lead to spatial improvement?” Ms. Winner added. “You get yourself in a bind there. The arts need to be valued for their own intrinsic reasons. Let’s figure out what the arts really do teach.”

In their new study Ms. Winner, Ms. Hetland and their co-authors, Shirley Veenema and Kimberly Sheridan, focused on the benefits accrued through classes in painting, drawing, sculpture and the other visual arts. The results are to be published in their book, “Studio Thinking: The Real Benefits of Visual Arts Education” (Teachers College Press).

They observed students taught by five visual arts teachers in two high schools in Massachussetts: three at the Boston Arts Academy, a public urban high school, and two at the Walnut Hill School for the arts, an independent secondary school in Natick. At both schools, all students specialize in an art form but are enrolled in a regular academic curriculum.

The authors videotaped a two- to three-hour class of each teacher once a month for one academic year. They then zeroed in on what they deemed to be crucial segments of teaching and learning, showed those clips to the teacher after each class and interviewed them about their intentions.

“Why did you do that, what was your goal, what kind of learning were you trying to effect?,” Ms. Winner said, citing some of the questions.

After transcribing all the interviews, the authors spent a year developing a method for coding the tapes and transcripts according to the thinking, or “mind habits,” of the teachers as they sought to convey concepts and strategies to the students.

The researchers found that the visual arts classes did have broad indirect benefits, even if they were not directly related to quantifiable performance in other subjects. “Students who study the arts seriously are taught to see better, to envision, to persist, to be playful and learn from mistakes, to make critical judgments and justify such judgments,” the authors conclude.

In a design class taught by Mickey Telemaque at the Boston Arts Academy mentioned in the book, for example, students are encouraged to look through a viewfinder with one eye, so that they lose their depth perception and see the world as if it were a two-dimensional picture with flat lines, shapes and colors. Ultimately, the exercise not only demystifies the challenge of drawing but also enables students to grasp alternative ways of seeing.

Yet some educators assert that improved critical thinking redounds to measurable academic achievement too. A study by James S. Catterall, a professor of education at the University of California, Los Angeles, found that students who had more involvement in the arts in school and after school scored better on standardized tests.

He contends that the executive summary of Ms. Winner’s 2000 study did not reflect the full results of her research, which he said showed many positive benefits from arts classes. But Ms. Winner said the three statistically significant benefits that she found were unrelated to grades or test results: making music in the classroom improved visual skills in children; listening to 10 to 15 minutes of classical music improved the same type of skills in college students (although the effects lasted only 10 to 15 minutes); and classroom drama improved some verbal skills.

“When kids take a lot of art, they don’t improve in their core subject areas,” she said in an interview. “We simply found no evidence of that.”

When students who take art also generally do well in school, Ms. Winner and her co- researchers say, this may be because academically strong schools tend to have strong arts programs, or because families who value academic achievement also value achievement in the arts.

“You cannot conclude that because they’re taking art, they’re doing well in school,” Ms. Winner said. “There’s just no way to conclude anything about causality.”

“Not everything has a practical utility, but maybe it’s experientially valuable,” said Elliot Eisner, a professor emeritus of education at Stanford University. “Learning through the arts promotes the idea that there is more than one solution to a problem, or more than one answer to a question.”

Edward Pauly, the director of research and evaluation at the Wallace Foundation, which finances arts education, said that the arts can promote experiences of empathy and tolerance. “There is no substitute for listening to jazz, seeing ‘Death of a Salesman’ performed, reading ‘To Kill a Mockingbird,’ seeing the Vietnam War Memorial,” he said. “Those powerful experiences only come about through the arts.”

Still, such reasoning may not be sufficient to keep arts education alive in public schools. “That’s not the kind of argument that gets a lot of traction in a high-stakes testing environment,” said Douglas J. Dempster, dean of the College of Fine Arts at the University of Texas, Austin.

In a time when President Bush’s “No Child Left Behind” policy emphasizes test results, the arts do not easily lend themselves to quantifiable measurements.

Art classes are often the first thing to be jettisoned from a crowded curriculum. As a result, Ms. Winner said, it is understandable that some arts advocates hew to the academic argument to keep the arts in the curriculum. “The arts are totally threatened in our schools,” she said. “Arts advocates don’t even think about whether they’re accurate — they latch onto these claims.”

“I am an arts advocate,” she added. “I just want to make plausible arguments for the arts.”