EDUCATIONAL CHALLENGES OF SOME ASIAN STUDENTS BEING OVERLOOKED, SAYS REPORT
by Margaret Kamara | from Diverse Online

- The perception of Asian American and Pacific Islanders as the “model minority” because of their exceptional educational achievement needs reevaluation, according to a new report from the Government Accountability Office.

If Asian and Pacific Islander students were grouped into a more specific demographic categories -- Indian, Chinese, Laotians, Hmong, Samoan, for example-- the report suggests then educators would see that the needs of certain students are similar to that of Blacks and Hispanics.

Although they make up about 5 percent of the population, in 2005, Asian Americans and Pacific Islanders age 25 and older had the highest number of college degrees at 48 percent, followed by Whites at 30 percent; Blacks at 17 percent and Hispanics at 12 percent.

However, looking at each of the different subgroups, only certain groups are educationally successful. For example, the largest degree holders in the subgroups were Asian Indians and Chinese. 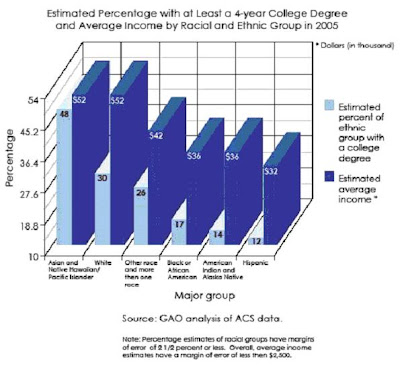 The groups that the report refers to as being behind were Vietnamese at 25 percent; at 17 percent; Native Hawaiian/Pacific Islanders at 13 percent.

The report, which was published last week, was requested by Rep. David Wu, D-Ore.; and Rep. Howard “Buck” McKeon, R-Calif, members of the House of Representative Committee on Education and Labor.

It’s a timely issue because before the report even came out students in secondary and postsecondary institutions in had been advocating for an expansion in the way the system categorizes Asians and Pacific Islanders, and have met with their state representatives.

“Pacific Islanders are just pushed under this umbrella of Asian and are never really seen,” Nefara Riesch, a Samoan American junior at the of Los Angles, told the Los Angles Times. “Our small numbers are never recognized.”

The students have also formed the “Count Me In” campaign and have joined with state Assemblyman Ted Lieu, D-Calif. to craft a bill that would require the state to collect data identifying each subgroup separately.

currently identifies 11 subgroups; the bill would increase the category to 21.

To address the issue, the recommends that Secretary of Education Margaret Spellings, facilitate information sharing between Asian and Pacific Islander-serving institutions about strategies that help low-income students, beginning in high school.

Some of the information sharing strategies the believes will help retain, recruit and increase the graduation rates of all Asian and Pacific Islander students include a link on the Education Department’s website that institutions can post successful practices for each other to use.

A draft of the report was sent to the Department of Education and other government agencies and interested parties.

The report was based on data from the U.S. Census Bureau, Department of Education and speaking to officials and Asian American and Pacific Islander students, the GAO, at eight postsecondary institutions in , and .