SUPT. DEASY’S STYLE COULD MAKE OR BREAK HIS LEGACY IN L.A. UNIFIED

Supt. John Deasy must pair strong leadership with an open mind to achieve his goals for the school district. 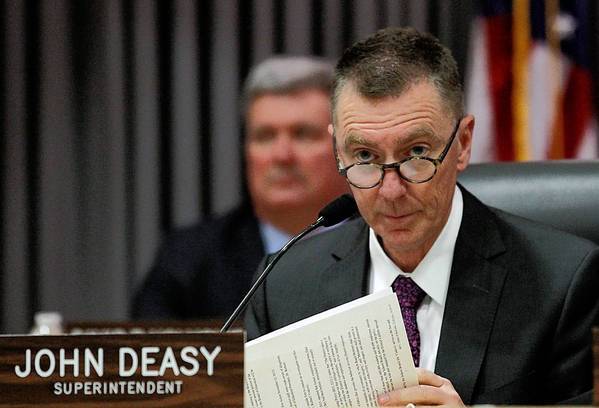 Deasy's not perfect, but he'd be hard to replace. He's become a hero to civic leaders, who credit his vision and passion with moving the school system forward.

But he's also collected plenty of detractors in his two years at the helm. They're not likely to be mollified by the school board's deal — unless it requires the superintendent to earn an "A" in works-and-plays-well-with-others on his report card next year.

It's Deasy's personality, not his projects, that seems to turn people off. He's blunt and impatient, bordering on arrogant. His single-minded focus, which helped lift student achievement, can also blind him to the wisdom of others' contributions.

Breakfast in the classroom might not have generated so much grumbling among teachers if they'd been asked to weigh in. The iPad rollout might have been less of a mess if Deasy hadn't rushed it.

It's clear to me that Deasy has his students' best interests at heart. I just wish he wouldn't so often act like he's the only one who does.

Give Deasy credit for thinking big. He's trying to prepare children for tomorrow, instead of for today. Under his watch in Los Angeles Unified, test scores rose, truancy dropped and more students graduated with the courses they need for college.

But a school system is more than a collection of metrics. If Deasy is perceived as alienating teachers and distancing parents, his take-no-prisoners approach might win battles but lose the war.

Even supporters cringe at his hubris. "I think he's a bit self-righteous," said Marqueece Harris-Dawson, head of the Community Coalition in South Los Angeles. "But if he's going to have a flaw, that's a good one to have."

Harris-Dawson was among hundreds of people from a dozen community and civic groups who showed up at Tuesday's school board meeting to argue for Deasy's retention.

Deasy is the first superintendent in decades to back the coalition's efforts to improve schools in South Los Angeles*. "He's willing to put whatever political capital he has on the line" to draw attention to social and economic issues that hold low-income children back, Harris-Dawson said.

*   I agree with much of what Ms. Banks writes and Mr. Harris-Dawson says – but here I submit that perhaps both have had a little too much of Dr. Deasy’s ‘Nothing happened in LAUSD until I got here’ Kool-Aid.  Both of Ray Cortines’ regimes focused on the interests of low income kids; David Brewer was focused like a laser on the issues of children of poverty – especially on those of  Black boys. And Roy Romer’s building campaign built more schools in South and Southeast L.A. than anywhere else  -- relieving overcrowding and taking kids off the bus – investing in low income children and their communities - setting the stage for the progress that accompanied and followed the initiative.

He likes that Deasy's not afraid to ruffle feathers and make some people upset. "He's excitable, he's impatient … and if your approach is a gradualist approach ... he's not somebody you're going to get along with; that's just not going to happen.

"I have witnessed and can understand why people cross swords with him," Harris-Dawson said.

Warren Fletcher is one of those people. Fletcher heads UTLA, the union that represents the district's 32,000 teachers.

He and Deasy used to meet every Friday morning to talk about district issues. But when the union leader tried last year to discourage teachers from volunteering to test a new evaluation process, Deasy abruptly ended those meetings.

Fletcher says he was trying to safeguard teachers' rights. Deasy saw it as sabotage; the partnership was over.

What's troubling is not the disagreement, but the fact that it ended their dialogue. That seems to me more about egos than about ideals.

I hear it all the time from teachers when I write about education: Deasy is a tool of business interests, pushing corporate-driven reforms without consulting the people whose job it is to make them work in the classroom.

Deasy's been pilloried for making a promotional video for Apple, then pushing a $1-billion deal to equip district students with iPads. If you listen to his educator proteges, picked to run the iPad program, they do seem suited for the boardroom.

That's from a video the district made to explain the program to parents.

It troubles me to hear education reduced to market concepts. It also explains why parents and teachers might feel disconnected from the process.

Deasy told me he still meets with groups of teachers every month. "Very helpful. Great dialogue," he said.

But he's homing in on teachers from reform-minded groups that support his agenda. That may feel fortifying, but it's preaching to the choir.

I asked both Fletcher and Harris-Dawson what Deasy needs to do differently to build on his success and bring naysayers along.

The union leader wants the superintendent to talk less and listen more. Stop demonizing those who disagree or are slow to get on board.

"We ought to be able to ask questions without being accused of opposing good nutrition or denying technology to poor children," Fletcher said. "When the perspective of classroom teachers is met with a deaf ear or 'talk to the hand' ... it makes it very difficult to teach with the kind of optimism that teachers need in class."

"His community work could be better," Harris-Dawson said. "Just like the billionaires will write checks — he's prodigious at raising funds — people in the community will do things to help the district be successful. They just have to be engaged."

Harris-Dawson said he's already given Deasy this bit of advice: "The people who have an interest in change are not [in district headquarters] on Beaudry. They're the people picking their kids up from school, they're the teachers in the classrooms of our toughest schools, they're the parents who show up for meetings."

Talk to them, tap their energy, find out what they need.

Neighborhoods like his, long neglected, are inspired by Deasy's indignation, Harris-Dawson said. "Now it's time to hunker down and build a bridge."