SPEND MONEY ON THE STUDENTS IT’S MEANT TO HELP

A revamping of California school funding sends more dollars to districts with the neediest children, but it may give the districts too much flexibility.

Editorial By The Times editorial board | http://lat.ms/18KYg3k 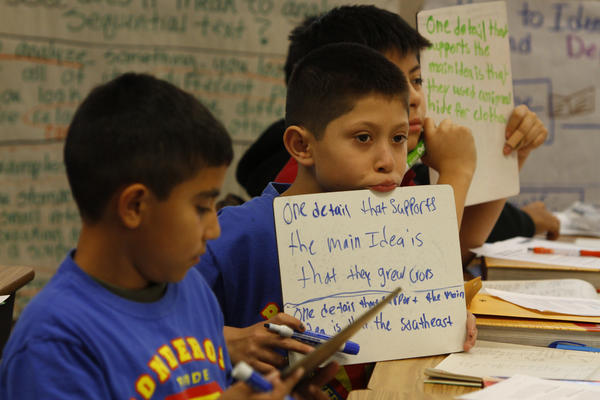 Ponderosa Elementary School in Anaheim has spent extra money trying to boost the academic achievement of its large number of students who are low income and still struggling with English. (Los Angeles Times / January 11, 2013)

November 29, 2013  ::  This year, Gov. Jerry Brown pushed through a new formula for funding public schools, a simpler and fairer approach designed to drive more money to students disadvantaged by poverty or a lack of English fluency. The change is expected to help the state's neediest children for decades to come.

But Brown's noble concept will be undermined if the funding is used by schools as an unrestricted bonus rather than as money with a mission. The legislation that revamped education funding was unfortunately vague on how the money should be used, leaving the details to the state Board of Education. And the draft regulations that came before the board this month were woefully lacking. When final regulations are approved, they should make one thing clear: Needy students are the reason for the extra funding.

Under Brown's plan, school districts will receive a base payment for each student. But because disadvantaged students need extra services to close the achievement gap — preschool, tutoring, specialized teachers and other programs — districts will receive an additional 20% of the base for each low-income or nonfluent student. On top of that, there is a "concentration" payment for districts in which more than 55% of the students are disadvantaged.

But how should the money be spent? The draft regulations provided districts with three options: spend more money on disadvantaged students; provide more programs for them; or raise their achievement. The latter two options include no requirement that all or most of the new funding be spent on needy students, and the rules are so lax that schools could call even minor improvements "more programs" or "higher achievement." Say, for example, that a fifth of the students in a district are disadvantaged. Under the draft rules, if administrators spent all the extra funding on teacher raises, middle-class students would be receiving more of the benefit than needy ones. If those students' scores rose even slightly, the district could claim it had fulfilled the requirements of the third option.

Brown has made clear that he wants the state to avoid dictating expenditures to school districts. To some degree, he's right: Districts should have the flexibility to make their own decisions and the freedom to innovate. Perhaps musical instruments would most help low-income students, or more counselors or on-campus healthcare. It is also inevitable and appropriate that some of the new money will end up helping other students as well; if a school adopts a new reading program for the low-income students who make up most of its population, that program must of course be offered to all students.

But state officials need to add some teeth to their good intentions. Under the funding law, districts must submit plans for using the new money to the county departments of education. To win approval, those plans should concentrate spending on the students for whom it was intended.