NYT: OAKLAND SCHOOLS STRUGGLE, BUT EMERYVILLE MAY POINT A WAY UP

July 22, 2010 - In his five-year plan to turn around the lowest-performing schools in the Oakland Unified School District, Superintendent Tony Smith does not mention teachers, textbooks or test scores.

Instead, Mr. Smith said his students most urgently needed social and health services, engaged parents and activities outside the classroom.

Whether Mr. Smith can overhaul the schools in Oakland is a subject of intense interest among Bay Area educators. Oakland Unified has lost $122 million in financing in the latest cuts to California’s embattled public schools. The city’s endemic problems, particularly poverty and crime, have had a dramatic effect in the classroom.

But Mr. Smith has a record of reform: As a young superintendent in Emeryville in the early 2000s, he enlisted social workers from California State University and nurses from the Wright Institute in Berkeley. Students interned at Pixar and made street projects with Seyed Alavi, the conceptual artist.

Some educators question whether Mr. Smith’s ambitious agenda is realistic.

“It’s awfully hard to establish that kind of support and sustain it over time when we’re simply unable to even fill the classrooms with teachers,” said David N. Plank, executive director of Policy Analysis for California Education, a nonpartisan research center. “The fact that it doesn’t happen very often isn’t because people haven’t realized it. It’s because it’s awfully hard to pull off.” 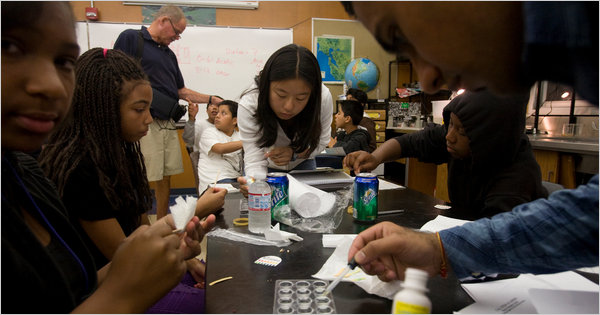 Mr. Smith, 43, said that he understood the need for quick results, but that reform was imperative if the city was to break the cycle of underachievement for its most disadvantaged students.

“It’s a big, crazy, intense idea that we would do this citywide,” Mr. Smith said in a recent interview. “Yet the pattern we see now is unacceptable, and unless we do something significantly different, we’re not going to get a different outcome.”

Mr. Smith, a former captain of the Cal football team, came to Oakland a year ago as a self-described education wonk. Lisa Villarreal, an education specialist at the San Francisco Foundation, a philanthropic organization, said Mr. Smith was already known as a rising young administrator who was “very, very taken” with concepts that had been tested for decades in New York — by Geoffrey Canada, an educator, in his Harlem Children’s Zone, and by Richard Murphy of the Beacon Schools.

In 2004, when Mr. Smith took over in Emeryville, the school district was still reeling from a 2001 bankruptcy. It is tiny compared with Oakland, having just two schools and 780 students, about 84 percent of whom qualify for free or reduced-price lunches.

Mr. Smith’s approach was to enlist the entire community — including businesses — to improve the schools. The partnerships led to support and new opportunities not only for students but also for their parents. Emery Unified has since formed alliances with the Y.M.C.A. in nearby Albany and the Berkeley library system. A Center for Community Life is in the works to provide health services for the elderly, crime prevention initiatives and a project to curtail teenage pregnancy.

Mr. Smith left Emery Unified in 2007. This year, the school district boasted the highest gains in test scores of any district in Alameda County. And while districts elsewhere are suffering under steep budget cuts, support from local businesses and foundations has helped cushion Emery.

Education researchers from Stanford and the University of California, Berkeley, who have studied Emery Unified say it is difficult to quantify the effects of Mr. Smith’s program on student performance. But in the hallways, people are sold.

“This is a district that has risen from the ashes,” said John Sugiyama, who succeeded Mr. Smith as Emery Unified superintendent. “All these ideas that we’re talking about right now, a lot of that goes back to Tony.”

Mr. Smith said he believed that his approach would work well in Oakland, because the schools could serve as a bubble to fend off social problems that he believes are at the root of academic underachievement.

“Children in affluent families are provided a certain environment that plays a powerful role,” Mr. Smith said. “Those opportunities don’t always exist for our children.”

In some ways, the timing is ideal, with everyone from the Obama administration to local politicians pushing for dramatic change in the way public schools are run. In June, Mr. Smith packaged his ideas into a five-year strategic plan, which the Oakland school board’s seven members unanimously approved. Last month, Oakland was among several Bay Area cities to submit a preliminary proposal for a Promise Neighborhood grant, a community schools initiative financed with $10 million by the Department of Education.

Each school would partner with a neighborhood organization to provide an array of social services. For years, a number of Oakland nonprofits have pushed for such a strategy, said Junious Williams, chief executive of the Urban Strategies Council, a community development organization. But, before Mr. Smith, they never had a superintendent who championed the idea.

“There was finally a real alignment,” Mr. Williams said.

But many still question whether the Emery model can be used. In Emeryville, with its robust business tax base, Mr. Smith forged a strong alliance with a group of business people behind the Emery Education Fund.

Researchers say a parcel tax pushed through with strong business support in 2003 was the crucial factor in the district’s sustained success. An extension of the tax passed easily in 2007. John Gooding, an Emeryville consultant and president of the fund, said real estate developers and large local corporations like Novartis and Pixar had donated millions to the school district in the past decade.

“We have lots of great foundations here in the Bay,” she said, “but it’s not clear whether they’re going to rally around the Lower San Antonio in Oakland.”

There are also questions of execution. The Oakland initiative would ultimately include dozens of disparate organizations, raising questions of how to manage such a sprawling and complex bureaucracy while maintaining accountability over public money.

But Mr. Smith’s supporters said that was where his experience could be most useful.

Mr. Smith said companies like Kaiser and Clorox had already signaled their willingness to play a role in the Oakland project. The most influential Bay Area philanthropic groups, like the San Francisco Foundation and the California Endowment, are Mr. Smith’s most enthusiastic supporters.

But his most reliable cheering section may be the small city just north of Oakland, where Mr. Smith’s reforms continue.

Mr. Sugiyama, the Emery Unified superintendent, said he was most proud that beginning later this summer, parents would be able to attend low-cost night classes offered by Berkeley City College at Emeryville High School. The program is designed to lead to an associate degree after two years of continuous enrollment.

Next to Mr. Smith’s desk at the Oakland Unified offices is a daily reminder of his work at Emery Unified: a three-foot-long, yellow and black painting that Emeryville students made in a summer program with local artists.

“This is a dialogue I’ve been having for 10 years,” Mr. Smith said. “People are ready.”

A nonprofit, nonpartisan news organization providing local coverage of the San Francisco Bay Area for The New York Times. To join the conversation about this article, go to baycitizen.org.