from the solidaridad blog by Robert D. Skeels 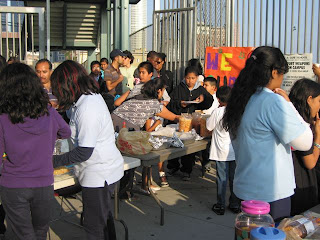 Monday, November 16, 2009 -- I recently interviewed Peri Lynn Turnbull of the California Charter Schools Association, who maintained the CCSA and its constituents believe in the obligation to educate every child. She stated that even though the charters are negotiating with LAUSD over this requirement in the current RFP, that CCSA is committed to Special Education. We can take Ms. Turnbull at her word, that this is the official position of the CCSA.

In practice however, the corporate charter-voucher establishment perpetrates something completely different. The recent documents from the Modified Consent Decree expose corporate CMO charter-voucher school discrimination and exclusivity. Very telling is the statement that children with disabilities are "significantly underrepresented" at CMO run charter schools. The executive summary of the report, and the data tables from the report. Marco Petruzzi's concerns that special education programs cut into his massive salary aside, even these corporate run schools should be obligated legally, ethically, and morally to educate every child! The easy solution is to just keep schools public and ditch the failed CMO experiment altogether, but that's a battle that will take some time.

My little missive to the LAUSD Board President about aligning with and co-signing the outrageous lies about UTLA coming from highly paid corporate charter-voucher proxies including Veronica Melvin, Maria Casillas, and Jarad Sanchez has proved popular. Let's say it caused some real consternation on the board. If you haven't seen it: Open letter to LAUSD Board President Monica Garcia regarding the press conference.

Brian Jones is his usual brilliant self in The charter school charade. This is one of those articles that you want to print out tons of copies and give to everyone you know! New York has a vibrant parent-teacher-student movement fighting back against the corporate charter-voucher establishment called the Grassroots Education Movement (NYC).

In 'Market Share' as a goal for privatization attacks on public schools... Charter master plan targets gaining 'market share' in urban districts Kenneth Libby and George Schmidt expose Arne Duncan's strong ties to the reactionary right wing extremist firm "John Galt Solutions, Inc." modeled on the bankrupt ideologies of Ayn Rand, who George pegs perfectly as a "right wing fundamentalist." Make no mistake, the Andy Smarick Ken discusses in the article works with range of right wing think tanks and is the ideological muse of Steve Barr and other DLC/DFER disciples of public school destruction. We've mentioned the Smarick article published in a journal from The Hoover Institution used by Green Dot Schools and their front group LAPU/PR to implement their hostile takeover plans before in the notes of a recent article here.

"California's public universities and community colleges have half as much to spend today as they did in 1990 in real dollars. In the 1980s, 17% of the state budget went to higher education and 3% went to prisons. Today, only 9% goes to universities and 10% goes to prisons."

Adam Sanchez looks at this administration's reactionary education policies in Race to the top or to the bottom? I'd be remiss not to reprint this quote:

"One study reviewed in the book showed that family income supplements as low as $4,000 a year improved children's school achievement by 10-15 percent. So what would a real "Race to the Top" program look like? We could start by taking the largely taxpayer-funded $23 billion in bonuses that Goldman Sachs is giving out this year, and put that money toward giving nearly 6 million families that $4,000 income supplement."

For more on the infamous Vielka McFarlane self-colonization (aka teach civil rights at a charter school -- loose your job) incident, there's a much older, but well thought out piece on Firedoglake L.A. Charter School: Emmett Till Deserved to Die.

More math and mendacity lessons from Green Dot Public Schools. The corporate hacks at Green Dot love to crow about their ability to place their graduates in college. Well, it sure isn't because of their proficiency levels. There are tables published by the CSU system for all schools available, with a wealth of statistics. I choose one of Green Dot's better performing corporate CMO schools, since they recently accused me of just picking on their Animo Watts II campus.

Let's look at Animo Venice Charter High School. Of the Green Dot students admitted to the CSU system in 2008 67% WERE NOT PROFICIENT IN MATHEMATICS. This is compared to just 49% of the much maligned LAUSD students. Moreover, only 33% of the children graduating the Green Dot corporate factory school were proficient, while children attending public schools comprised a much more respectable 51%. More evidence of the Silverlake snake oil salesman Steve Barr's exceedingly arrogant, but obviously erroneous statement "our model should work in any educational context, because the principles are embodied in all high-performing schools." I'm sure the right wing corporate charter-voucher apologists Jarad Sanchez and Veronica Melvin of the so called Alliance for a Better Community could find a way to spin Green Dot's abysmal numbers, but maybe instead of listening to washed up businessmen, Wall Street hucksters, and political hacks like Barr et al, we should have educators leading the way for education.

This Green Dot Math and Mendacity theme is going to be a continuing series on this blog, since Green Dot is constantly guilty of the most egregious manipulation of facts and statistics.