NO DAY 107, BUT COUNTING DOWN TO THE NEXT ELECTION

[smf: The gov signs at 1PM, the list of line item vetoes should be available after that. California government is only transparent after the fact] 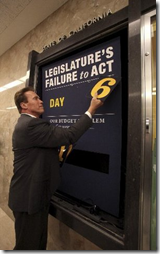 Of course, as Jim Sanders reports in today's Bee, more money woes could be in the state's future as the economy continues to falter.

"If I could tell you what revenues are going to be in May, I would not be making this call from Sacramento -- I'd be making it from Las Vegas," quipped H.D. Palmer, a spokesman for Schwarzenegger's Department of Finance.

I'd bet the under on that.

The real drama of the weekend will be at the California Republican Party's convention, which descends on Sacramento this evening.

In terms of budget fallout, there's the pending resolution to censure every Republican lawmaker who voted for taxes.

But there's also early jockeying in the 2010 governor's race between Meg Whitman and Steve Poizner.

Both candidates have been very critical of the budget deal struck in the Legislature.

(Speaking of sharp words from gubernatorial candidates, check out Lt. Gov. John Garamendi say this week, "We have an infection here. And it's a Republican infection, and it's really spreading across this nation.")

VICTORY LAP? Schwarzenegger, meanwhile, won't be anywhere near the GOP activists. The governor is off to Washington this weekend, in preparation for next week's National Governors' Association conference.

FURLOUGH FRIDAY: Believe it or not, it's been only two weeks since the first state worker furlough.