CALIFORNIA’S @ ROCK BOTTOM: If California wants its share of federal largesse, Sacramento had better get its act together, fast.

Editorial From the Los Angeles Times

February 6, 2009 -- California is now the Wile E. Coyote of states. Our governor and lawmakers have dickered and dawdled all of us off a cliff, but we're trying desperately to resist the realization that there is no ground beneath us. Our legs 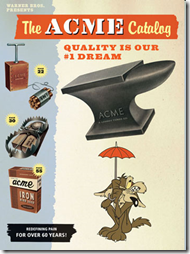 are pumping and our eyes are on Obama administration stimulus packages and bailout money on the far, sunny slope, and we might just reach them if we don't acknowledge that the bridge is out, or that we've run off the road, or that our Acme wings have failed. Once we notice that we're hanging in midair, we'll fall.

Too bad for us, but Standard & Poor's has already noticed. It said this week that California is a monumentally bad bet for investors, presumably because the state lacks both the will to adopt a budget and the ability to raise enough tax money to guarantee it will pay back all those bonds voters keep approving; S&P now ranks California 50th among states in credit ratings.

If ratings agencies recommend California as the last choice for bond buyers, how attractive could the state look to Washington? President Obama and Congress want federal dollars to go to work immediately, so they hardly could be blamed for guiding those dollars to states with governments that pay contractors with Federal Reserve notes rather than IOUs, with budgets that balance, with governors who lead and legislatures that function. Take a look -- that's not us.

Gov. Arnold Schwarzenegger has identified "shovel ready" projects lined up for federal cash. But they will fall behind similar projects ready to go in states where governors and lawmakers are not arguing about permits and approvals, and where state treasuries are solvent so state dollars can go to work. The State Children's Health Insurance Program, reauthorized and expanded and signed by Obama on Wednesday, means $1.5 billion in funding for California's much-needed Healthy Families program only if the state is functioning sufficiently to run it. Federal aid for Medi-Cal will be wasted if California fails to produce its state match.

So it's hard not to pretend that Obama will ride to the rescue because of all the campaign fundraising and phone calling by true-blue California Democrats.

A budget vote is set for next week, and with any luck, California will once again join the ranks of functioning states, but powerful people here keep tripping over their own cleverness. Two cases in point: the recent warning by a union official that he will target Democrats for recall if they cut the wrong things from the budget, and the pronouncement by state GOP official and blogger Jon Fleischman that Republicans who vote to increase taxes will be censured. With folks like these pulling the levers of power, the best way out of the recession may be to invest heavily in Acme.