Tioga High School students organized a petition drive in hopes of recalling their school board. Parents, teachers and even their principal joined the effort.

Big Oak Flat-Groveland Unified School District board members got rid of a popular math teacher after a strange plagiarism complaint.


January 5, 2009  -- Reporting from Groveland, Calif. -- When the school board in this rural community voted to get rid of popular math teacher Ryan Dutton in September, the students at Tioga High School were so upset, the entire school boycotted class the next day. Then they decided to save his job.
What started as a civics class project soon became much more: a campaign to remove all five board members of Big Oak Flat-Groveland Unified School District. 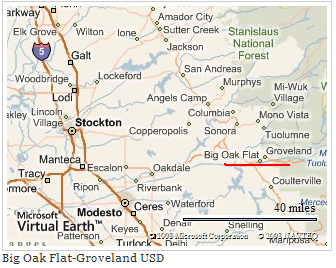 Believing in their teacher, the students organized a petition drive to hold a recall election in this sparsely populated district near Yosemite National Park. With the help of parents, teachers and even their principal, the campaign turned in about 1,200 signatures last week for each board member -- 910 were needed to call a special election. The students expect to learn this week whether the recall qualifies. If so, an election will be held in May.

Dutton, 31, a former professional football player, lost his job over allegations that he cheated in a course he took last spring at Cal State Fresno. The university cleared him and apologized for "any misunderstanding," but the board has refused to reinstate him.

"We didn't like what was happening in our district," said Elise Vallotton, Tioga student body president and president of the newly formed Students for a Better School District. "Many of us stood up at board meetings and explained our point of view. Obviously, they weren't listening. They didn't do anything to try and help us, and that's why we started the recall."

With a long history of political infighting and personal rivalries, it has run through seven superintendents in eight years. When Supt. Mari Brabbin was hired last year, one local businessman greeted her, "Welcome to the Gaza Strip."

The recall campaign has brought that bitterness and hostility into the open.

"It's become a dialogue of the deaf," Brabbin said.

Brabbin, who placed Dutton on leave, is also a target. Parents dug up complaints from her previous job. And a preliminary report from the association that accredits schools found that Tioga's "program this year has been totally disrupted because of the decisions of the superintendent and the school board."

The schism in the district was apparent at a tumultuous meeting of the school board in December. Hundreds of people crowded into the Tenaya Elementary School cafeteria to support the students seeking Dutton's return.

Community members peppered the board with allegations of mismanagement, missing school funds, improper teacher transfers, secret board meetings and lack of oversight for school construction projects.

More than a dozen students -- including the Tioga High basketball team dressed in uniform -- appealed to the board to reinstate Dutton. As the students made their case, the board members sat stone-faced.

Krystal Edman-Wilson, a sophomore, told the board she was disappointed that other beloved teachers had been forced to leave. Then she lost Dutton, who she said was "a great teacher and taught me math in a way I could understand."

"The students were starting to feel invisible in the eyes of the school board," she told the board. "Now, recall petitions are being signed. We want a fresh start."

Because most of Tioga's 120 or so students are not old enough to vote, they could not legally circulate petitions. Many parents joined the campaign, including one who provided an RV dubbed the "recall mobile" to collect signatures in remote areas.

"People who didn't get a chance to vote are trying to make a change in a small community in a very big way," said Gloria Marler, a former school board member who is supporting her daughter, Dana, 15, in the recall effort. "Basically, it's the children taking the initiative because their parents are either too afraid or too apathetic."

But the involvement of parents like Marler -- who is expected to run again if the recall qualifies for the ballot -- has prompted criticism that some grown-ups are taking advantage of the students to further their own agendas.

"They are being led by people who may not have their best interests at heart," school board member David Gookin said.

Some of the district's trouble stems from its geography. At 665 square miles, it is almost as large as Los Angeles Unified School District -- but has fewer than 500 students. Most attend Tenaya Elementary or Tioga High in Groveland, a Gold Rush-era community that is the largest in the district with about 3,300 residents.

But there is also Don Pedro High School, perched on the edge of the district 45 minutes down a mountain road.

Many students and parents in Groveland contend that Tioga has been shortchanged while Don Pedro, which draws more than half its 67 students from outside the district, has been favored.

The animosity reached a new pitch after the board hired Brabbin as superintendent and also named her principal of Don Pedro. Combining the two jobs, she says, was "the catalyst for the unrest."

A former Oregon high school principal, Brabbin is well-liked at Don Pedro. But she angered students and staff at the other two schools by reassigning some teachers and forcing out others, gaining a reputation in Groveland as arbitrary and vindictive. She also required Tioga's principal to teach half time and take a cut in pay.

The strangest part of the drama, though, is the plagiarism complaint that led to Dutton's removal.

A former punter who was signed by three National Football League teams and played in NFL Europe, Dutton was hired at Tioga High in 2007 to teach math. At the same time, he was studying to get his teaching credential at Cal State Fresno.

At Tioga, he coached baseball and was well-liked by students. Early last year Brabbin asked him to teach at Don Pedro. He declined, saying he preferred to stay at Tioga, where his wife also teaches.

On Sept. 22, Dutton was summoned to a meeting in Brabbin's office, where school officials pulled out one of his homework sheets from Cal State Fresno and accused him of copying the work. He denied the charge.

Two days later, the board voted not to rehire him for next year. Soon after, Brabbin placed him on leave without pay.

After Dutton hired an attorney and filed a complaint with Cal State Fresno, the head of California State University's teaching-credential program issued a letter clearing him.

"Any information previously communicated regarding Mr. Dutton's possible plagiarism or academic dishonesty in the program has been determined to have been unfounded," wrote Crystal Gips, systemwide director of the program known as CalStateTEACH. "We apologize for any misunderstanding and inconvenience."

Claudia Keith, the Cal State system's assistant vice chancellor for public affairs, said the university never made a finding of plagiarism against Dutton. She said it was unclear how the allegation -- or Dutton's homework -- reached his employer.

"I would just like to get back in the classroom," Dutton said. "I have been cleared of wrongdoing and they are ignoring that. The unfortunate thing is that it comes down to adults arguing about what they want, and the children are left out."

But school board member Charles Day said the board believes the information it received in private and has no intention of reversing its decision.

Added board President Lillian Cravens, "There is no defense against lies."

Brabbin declined to discuss Dutton's case but said, "School boards don't make these decisions without having sufficient reason to do so."

At Tioga High School, Principal Sandy Bradley and some of her teachers have put their jobs on the line by supporting Dutton and the recall. Tim King, the civics teacher who helped the students launch their campaign, wears a button that reads, "Am I Fired Yet?"

"The kids loved him," she said. "I had kids rave about the fact that they finally understood math. He's never boastful. He's not arrogant. He's an all-around American good guy."

After a review committee visited Tioga last month, the Western Assn. of Schools and Colleges issued a scathing preliminary report that bolstered the case for the recall.

"The school's ability to focus on the needs of the students has been limited with the superintendent's behavior and micromanaging," the committee wrote, citing "retaliatory actions" by the board and superintendent against staff members who spoke out against them.

Parents, who contend that the board and Brabbin have violated open meeting laws and mismanaged school finances, asked Tuolumne County Dist. Atty. Donald Segerstrom in November to investigate.

During a break at their contentious December meeting, all five board members and their attorney retreated to a school office where they could be seen through a window talking among themselves. The Brown Act prohibits a majority of a public board from meeting privately unless it has given advance notice of the time and subject.

Some Groveland parents also investigated Brabbin's background in Oregon and found allegations that, among other things, as principal of a high school in Eagle Point she changed students' grades, including her son's.

Two confidential complaints alleging that Brabbin engaged in misconduct were filed with the Oregon Standards and Practices Commission. Both remain under investigation.

Brabbin said the charges are unfounded and that she is the victim of a "witch hunt." She said, "Anybody can file a complaint."

Three years ago, Tioga High School was named a California Distinguished School. Since then, Bradley said, the district's mismanagement has caused a rapid decline.

"Never in my 24 years in education have I seen anything like this," the principal said. "This is a sad commentary on what power and ego can do when people get on a school board and don't have the best interests of students at heart."

●●smf's2¢: There is more and less in common with LAUSD and BOF-GUSD besides the similarity in size and numbers (appx 500 students v. 700,000+) and an apparent disregard for the Brown Act. This is one of those things where it’s difficult to separate myth from history, but legend has it that it was a groundswell of interest and political activism from the students at John Marshall High School that first got their teacher David Tokofsky elected to the Board of Ed in 1995.