NO COST @ WHAT COST?: who is the Boston Consulting Group when they're at home?

Rumor (and press reports) have it that the Boston Consulting Group was the principal author and driving force behind the recent School Report Card and BCG seemingly has a blanket consulting, planning and implementation contract with LAUSD on day-to-day operation of the District - having also had a  role in the Superintendent’s 100 Day Plan. This BCG contract is reportedly funded at no cost to the District by the Bill & Melinda Gates Foundation and the Michael & Susan Dell Foundation* – which makes BCG  an outside consultant, once or twice removed – with dubious public accountability.

The above misstates the history. The School Report Card  had at least part of its genesis in the LAUSD A-G Working Group about two years ago. “(T)he start of this year” refers to 2008; iDesign didn’t exist at that time. iDesign and its progenitor iDivsion is a subset of LAUSD created to administer non-traditional programs, such as The Mayor’s Partnership Schools, The LMU Partnership, etc.

MSNBC gets it closer to right when they report: “These reports were originally developed through collaboration between the LAUSD and Mayor Antonio Villaraigosa's Partnership for LA Schools.”

Searches of the Dell and Gates Foundations websites for grants to Los Angeles, LAUSD, Los Angeles Unified School District or Boston Consulting Group show no evidence of this investment “in the district”.

Not to be a conspiracy theorist – but sometimes there are conspiracies: Remember the words of the shadowy man in the parking garage: “Follow the money.”

Remember also that the consulting contract did not pay the $700,000 to $1 million it cost to distribute the School Report Card.

At that same District meeting Superintendent Cortines promised full public accountability and disclosure as to the cost, effectiveness and results of all District consultant contracts. The BCG contract – because it is technically free to the district it may be outside this oversight – all the more reason why disclosure and accountability is merited. No cost at what cost?

Has LAUSD held off a takeover by the Mayor only to have takeover accomplished through other means?

The Official story: The LAUSD FAQ/Factsheet on the Report Cards

From Wikipedia, the free encyclopedia

The Boston Consulting Group is a global management consulting firm and a leading advisor on business strategy. BCG partners with clients in all sectors and regions to identify their highest-value opportunities, address their most critical challenges, and transform their businesses.

BCG believes it differs from competition by its customized approach that combines deep insight into the dynamics of companies and markets with close collaboration at all levels of the client organization. The Group is a private company with 66 offices in 38 countries.

Founded in 1963 by Bruce Henderson the firm prides itself on its employee focused culture: from early implementation of an employee stock ownership plan to winning ‘Best small company to work for’ by Fortune magazine 3 years in a row. 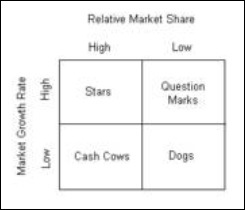 In the 1970s, BCG created and popularized the "growth-share matrix", a simple chart to assist large corporations in deciding how to allocate cash among their business units. The corporation would categorize its business units as "Stars", "Cash Cows", "Question Marks", and "Dogs", and then allocate cash accordingly, moving money from "cash cows" toward "stars" and "question marks" that had higher market growth rates, and hence higher upside potential.

The chart was popular for two decades and "continues to be used as a primer in the principles of portfolio management," as BCG says.

▼The following is from the BCG website: one of the "Industries" (their word) they serve is PUBLIC EDUCATION. 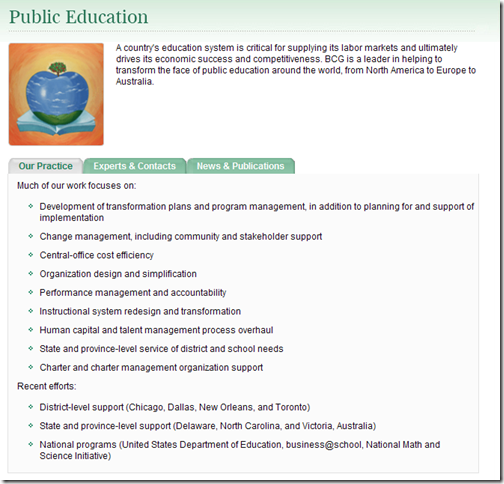 smf notes: Not to be a conspiracy theorist again, but note BCG's work for Charter Schools: charter and charter management organization support and for the New Orleans School District. The strategy - implemented by BCG for New Orleans Schools post-Katrina- is to make every school a charter school. (Like Huey Long's "Every Man a King" …only Charter Schools!)

Remember also that some say politics in New Orleans and Louisiana exist to make Chicago and Illinois look good!

And please note this: the words "Child", "Children", "Student" and "Students" appear nowhere on the BCG website or on it the Wikipedia entry about them — and certainly nowhere in the BCG vision or mission statements.

from This Week in Education

Russo wrote in his EdWeek Blog back in June ‘08

Today's Washington Post has an interesting piece about the use of high-priced management consultants -- Deloitte, KPMG, McKinsey, Alvarez & Associates (of St. Louis and NOLA fame) -- in urban school districts, a good reminder that it's not just the policy wonks and think tanks that drive real live schoolpeople crazy. "Two dozen high-priced consultants have set up shop on three floors of the D.C. public schools' headquarters, wearing pinstripe suits, toting binders and BlackBerrys and using such corporate jargon as "resource mapping" and "identifying metrics," begins the piece (Big-Name Consultants Greeted With Wariness).

"They come from big-name restructuring firms, and the city is paying $4 million for their services this summer."

It's not just DC, of course. Chicago has used Boston Consulting Group on several projects, some of which haven't turned out particularly well. St. Louis and New Orleans have both used Alvarez, to mixed reviews. And, as the article points out, few of the consultants offer project management services or stay on to implement the plans that they make. Binders and powerpoints are all well and good, but making the plans work and building buy-in and capacity are the real keys.

Back to the Wikipedia entry▼

BCG most often competes directly for contracts with McKinsey & Company and Bain & Company.

BCG typically hires for an Associate or a Consultant position. Whilst so called "lateral hires" as Project Leader, Principal or Partner are possible, they are not the norm. BCG recruits MBA graduates to join as Consultants from the world's top business schools[1]. Additionally, increasing effort is being placed on hiring advanced non-business degree holders. Graduates holding JDs, MDs and PhDs in disciplines like engineering, science, and liberal arts receive training in business fundamentals and then typically join the firm as Consultants. There is also an opportunity to join as a Summer Associate or Summer Consultant (internship) position for 10 weeks, which for the majority of interns will result in an offer for full-time position.

BCG uses the case method to conduct interviews, which is an interview technique designed to simulate the types of problems inherent in management consulting and to test the qualitative and quantitative skills deemed important for abstract thinking in a business setting.

Payback - Reaping the Rewards of Innovation. By James P. Andrew and Harold L. Sirkin, 2006. Published by the Harvard Business School Press, Payback has become a staple in the MBA curriculum.

Blown to Bits - How the New Economics of Information Transforms Strategy. By Philip Evans and Thomas S. Wurster, 2000.

Treasure Hunt - Inside the Mind of the New Consumer. By Michael J. Silverstein with John Butman, 2006.

Globality: Competing with Everyone from Everywhere for Everything[2]. By Harold L. Sirkin, James W. Hemerling and Arindam K. Bhattacharya, 2008.

[edit] Offices in Europe and the Middle East

[edit] Offices in the Americas