Rooney Redux: “WHAT PART OF ‘UNLAWFUL SEXUAL RELATIONSHIP WITH A MINOR’ IS IT THAT YOU DON’T UNDERSTAND?”

In the PILLSBURY REPORT LAUSD’s hired gun/outside counsel $209,000. investigation of the Rooney Matter – blame is assigned to Dan Issacs, then the District’s former Chief Operating Officer for the memo he sent out following Rooney’s initial arrest.

The report finds that Isaacs did not make clear the allegation that Rooney was a suspected child molester. 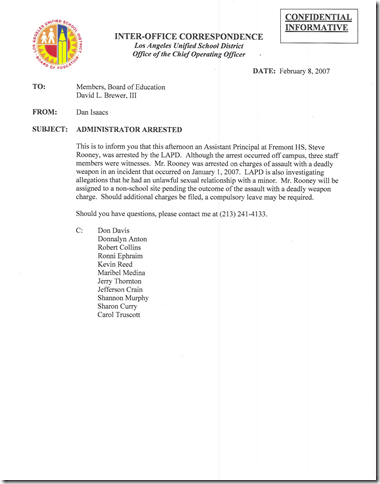 The ‘smoking gun’ part of the Isaacs Memo says:  “Mr. Rooney was arrested on charges of assault with a deadly weapon in an incident that occurred on January 1, 2007. LAPD is also investigating allegations that he had an unlawful sexual relationship with a minor.”

Any and everyone on the distribution of the memo who read those words and didn’t immediately understand the allegations wasn’t paying attention.

LAUSD is governed by memos and bulletins;  informatives, resolutions and policy.

The skill set required of a leader in such an environment is separating the important from the trivial; failure is defined in the inability to do so.  The EdSpeak word for this is “Decoding”.  We expect it of the beginners and we must expect it of the experts.

As memos go, that one was as clear as they come.

The Pillsbury report faults Isaacs in that he did not spell out that the person Rooney allegedly assaulted with a deadly weapon was the stepfather of the girl he was suspected of having an unlawful sexual relationship with.

Mr Issacs is also faulted because he did not circulate this memo to the Employee Relations Office and the Staff Relations Office (two silos in the Beaudry bureaucracy) — although it was circulated in a timely manner to those two offices by others on the circulation list.

We must stop the blame game and the witch hunt because there is plenty of blame  to go around …and no witches!  There is however darkness and evil. There is black and white and infinite shades of grey.

And though the word has descended into overuse and discredit — there are evildoers preying on children.  —smf

THE PILLSBURY REPORT on the LA Times Website, obtained through a Freedom of Information Act Request.  Also known as The Markham Middle School Report or Pillsbury Winthrop Shaw Pittman final report re: The Markham Investigation, dated June 2, 2008  -- plus Board Resolutions and Policy bulletins.