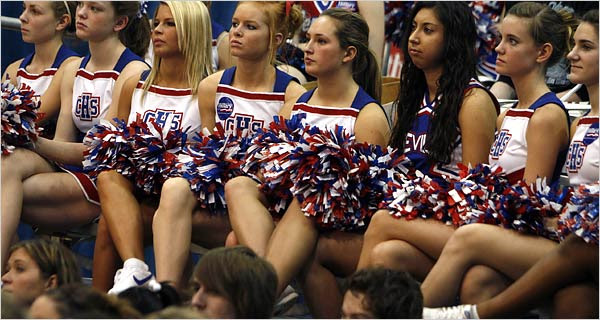 December 23, 2007 - WASHINGTON — Teachers cheered Senator Hillary Rodham Clinton when she stepped before them last month at an elementary school in Waterloo, Iowa, and said she would “end” the No Child Left Behind Act because it was “just not working.”

Mrs. Clinton is not the only presidential candidate who has found attacking the act, President Bush’s signature education law, to be a crowd pleaser — all the Democrats have taken pokes. Gov. Bill Richardson of New Mexico has said he wants to “scrap” the law. Senator Barack Obama has called for a “fundamental” overhaul. And John Edwards criticizes the law as emphasizing testing over teaching. “You don’t make a hog fatter by weighing it,” he said recently while campaigning in Iowa.

This was to be the year that Congress renewed the law that has reshaped the nation’s educational landscape by requiring public schools to bring every child to reading and math proficiency by 2014. But defections from both the right and the left killed the effort.

Now, as lawmakers say they will try again, the unceasing criticism of the law by Democratic presidential contenders and the teachers’ unions that are important to them promises to make the effort even more treacherous next year.

“No Child Left Behind may be the most negative brand in America,” said Representative George Miller of California, the Democratic chairman of the House education committee.

“And there’s no question about it,” Mr. Miller added. “It doesn’t help to have people putting themselves forward as leaders of the party expressing the same disenchantment they hear from the public, saying ‘Just scrap it.’ Congressmen read the morning papers just like everybody else.”

Democrats had long dominated the issue of education until Mr. Bush seized it in his first presidential campaign, making frequent stops at schools to condemn the “soft bigotry of low expectations” for minority children and to pledge that schools in poor areas would improve test results or face federal sanctions. The No Child law passed in his first year of office with the support of a strong centrist coalition.

Seven years later, policy makers debate whether the law has raised student achievement, but polls show that it is unpopular — especially among teachers, who vote in disproportionate numbers in Democratic primary elections, and their unions, which provide Democrats with critical campaign support.

“There’s a grass-roots backlash against this law,” said Tad Devine, a strategist who worked for the past two Democratic presidential nominees. “And attacking it is a convenient way to communicate that you’re attacking President Bush.”

These political realities are making it extremely difficult to rebuild the bipartisan majorities that first approved the law during Mr. Bush’s first year in office, when he worked on the legislation with Mr. Miller and Senator Edward M. Kennedy, a Massachusetts Democrat who is now the chairman of the education committee. Mr. Miller, a passionate advocate of school accountability, took the lead this year in trying to draw up a bill that would change troublesome provisions but preserve its core goals.

He faced obstacles from the start, including opposition from many Republican lawmakers, who say the law intrudes on states’ rights, and from Democrats, who say it labels schools as failing but does too little to help them improve. And by all accounts Mr. Miller worked doggedly to build consensus.

But virtually every proposed change in the law ignited fierce battles, and when Mr. Miller released a draft bill for comment in late August, it pleased no one.

“His bill got creamed,” said Amy Wilkins, a vice president of Education Trust, a group that advocates for disadvantaged children, who has worked closely with Mr. Miller’s staff.

Education Secretary Margaret Spellings also threw herself into the effort, meeting with scores of congressmen and barnstorming through Ohio and Indiana in a school bus, seeking Republican support.

“I killed myself,” Ms. Spellings said. But she acknowledged that the effort now faces tremendous obstacles. “It’s a minefield. If I were George Miller, I’d be saying, ‘How can I put Humpty Dumpty together again?’”

Mr. Kennedy now plans to take the lead with the bill early next year. “We have to convince people that the bill we introduce, that this will not be a rubber stamp of the current law,” he said in an interview.

Mr. Kennedy tried to clear the air last month by quietly inviting Mr. Miller and the presidents of the two largest teachers’ unions to a meeting on Capitol Hill. All four pledged to strive for agreement, but both union presidents said later that it remained unclear whether Congress could produce a bill acceptable to union members.

“I don’t think you recognize the magnitude of the anger that’s out there,” said Reg Weaver, president of the National Education Association. “My members are driving me, and if they think I’m not doing everything I can to change this law, they’ll take me to the woodshed.”

What is not acceptable to union members is unlikely to be acceptable to Democratic presidential candidates. The teachers’ unions have little influence with Republicans, and several Republican presidential candidates, including Mitt Romney, Rudolph W. Giuliani and John McCain, have voiced support for the law. But the Democratic candidates can hardly ignore unionized teachers in Iowa and New Hampshire, who are calling for sweeping change.

Alan Young, president of the National Education Association affiliate in Des Moines, got some television exposure about a year ago when he addressed Mrs. Clinton during a town-hall-style meeting. Pointing out that she was on the Senate education committee, Mr. Young urged her “not to be too quick to reauthorize the law as is,” but rather to rework its basic assumptions.

In the months since, Mr. Young said he has spoken about the law personally at campaign events with Mr. Richardson, John Edwards and Senators Barack Obama and Joseph R. Biden Jr.

“We want them to start over with a whole new law,” Mr. Young said.

Three of the Democratic presidential candidates, Mrs. Clinton, Mr. Obama and Senator Christopher J. Dodd, are on the education committee. Mr. Kennedy acknowledges that campaign criticism of the law could complicate his effort, but pointed out that even though the candidates have criticized the law, most have also expressed support for its core goals.

Mr. Obama, for instance, in a speech last month in New Hampshire denounced the law as “demoralizing our teachers.” But he also said it was right to hold all children to high standards. “The goals of this law were the right ones,” he said.

When Mr. Edwards released an education plan earlier this year, he said the No Child law needed a “total overhaul.” But he said he would continue the law’s emphasis on accountability.

And at the elementary school in Waterloo, Mrs. Clinton said she would “do everything I can as senator, but if we don’t get it done, then as president, to end the unfunded mandate known as No Child Left Behind.”

But she, too, added: “We do need accountability.”

Even though the candidates hedge their criticism of the law with statements supporting accountability, it is hard to imagine their accepting revisions that fall short of a thorough overhaul — and that could be difficult for Mr. Bush to stomach, said Michael J. Petrilli, a vice president at the Thomas B. Fordham Foundation. Even Mr. Bush’s catchy name for the law is likely to disappear in any rewrite, he said.

“I can’t imagine that Democrats could write a bill that would satisfy their caucus but not be vetoed by President Bush, at least in the current environment,” Mr. Petrilli said.