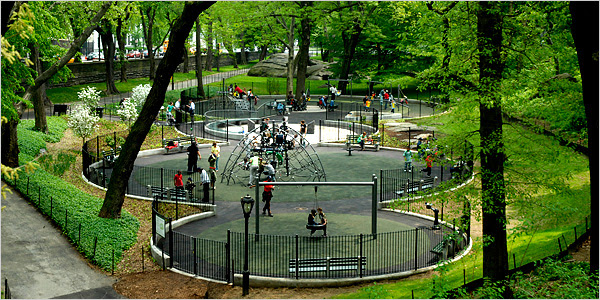 The West 110th Street Playground in Central Park. Beneath it all is springy rubber matting; falling is not a negative thing.

SUBTLE and earthy, in hues of green, brown and gray, the West 110th Street Playground at the north end of Central Park has little of the overt cheer associated with children’s spaces. Four adjoining circular areas, echoing the curve of the boulders jutting up beyond its south side and the airiness of the ferns dotting the terrain, offer sparse, space-agey climbing and spinning equipment with movable parts that wobble and sway, threatening to send a child tumbling. Beneath it all, springy rubber matting undulates like a grassy knoll.

“The intention is to fall,” said Marta Gutman, an associate professor of architectural history at City College, surveying the playground on a recent morning. “You don’t want to make the environment so safe that it’s not challenging.”

What? Get out the lawyer’s number.

The ever-shifting perspective on what constitutes the ideal environment for children is at the heart of “Designing Modern Childhoods: History, Space, and the Material Culture of Children,” a new book from Rutgers University Press edited by Ms. Gutman and Ning de Coninck-Smith, an associate professor in the department of educational sociology at the School of Education-Aarhus University.

A compilation of essays, the book traces the history of a veritable toy box of specialized architecture (schools, hospitals, playgrounds, houses) and objects (cellphones, snowboards, the McDonald’s Happy Meal) that have molded the landscape of children’s private lives.

Though the study of play and the material culture of children has grown by leaps and bounds in the last decade, the editors felt there was a hole in the scholarship. “While the history of childhood has been framed, the buildings have been completely overlooked because it’s almost too difficult,” Ms. de Coninck-Smith said. “How do you ‘read’ a building?”

Their book opens with two vivid images that compare and contrast the ways Europeans and Americans view children’s spaces in an urban environment. The first, a playground in central Copenhagen, is filled with grasses of different colors and shapes. The second, the two-year-old GrandParentFamily Apartments in the South Bronx, a six-story complex of 51 apartments, is the first public development in the United States created for grandparents bringing up grandchildren.

Stine Poulsen, a landscape architect who helped design the Copenhagen playground, said she sought to encourage children like her son “to sense the world in all its different colors and textures.”

“I want to create a space open to young children’s fantasy when playing,” she says in the book.

But the grittier GrandParentFamily Apartments are every bit as much a place of fantasy for another child, who imagines where he’s going to put his bed, his clothes, his computer and his PlayStation 2 in his new bedroom.

The comparison of the two spaces is intended to underscore the book’s thesis: “that children are social actors in their own right who use and interpret material culture on their own terms.”

In other words, whether you give children grass, a cardboard box, an iPod or rooms of their own, they are going to make it work for them.

“Designing Modern Childhood” circumnavigates the globe to examine how children have been cared for, emboldened, coddled, toughened up and even manipulated by adults who thought they knew best when it came to providing a child’s physical world.

Consider the campfire, a mainstay at summer camps across the United States. That ritual, borrowed from American Indians, was used to promote “muscular Christianity” at Y.M.C.A. camps in the 1890s, the scholar Abigail A. Van Slyck writes. It was highly endorsed by the pioneering psychologist G. Stanley Hall, who blamed women and girls for the “developmental derailment” of boys. With its rustic masculine atmosphere, summer camp would rescue boys from feminization.

The schools, while helping to bridge the gap between the education of white and black students, also furthered Washington’s “philosophy of self-help and industrial (vocational) education,” she writes. “White school officials would accept the facilities because black parents had largely paid for them, and because the schools would train black children as farm and domestic workers.”

America’s first playgrounds were very square and regimented, Ms. de Coninck-Smith notes, because their design emerged from the physical education movement of the 1930s, “when the bigger underlying project was to reform the city’s working class.” At the 110th Street playground “there’s a more organic approach,” Ms. de Coninck-Smith said, “with hardly any play equipment and all of these kind of round ball areas.”

As early as 1931 Carl Theodor Sorensen, the Danish landscape architect, came up with the concept of the adventure playground after observing children at play in construction sites and junkyards. His insights initiated a trend in playground design, Roy Kozlovsky writes, in which the “playground has no ready-made play equipment and no predetermined agenda for what should take place in it.”

The idea that the playground’s design, by not using equipment to dictate a child’s activity, would promote social skills like conflict resolution was first tested in Denmark in 1943, during the German occupation. It migrated to England, where the concept suggested a way to use bombed-out sites during postwar reconstruction.

Adventure playgrounds swept through Europe, particularly Scandinavia, and eventually reached the United States, though in smaller numbers and less successfully, because of liability issues.

Children in the United States are gradually losing outdoor playtime as schools put an emphasis on reading, writing, math and other indoor subjects. In one sense, the authors say, adults are imposing an adult model on elementary schools.

“One of the things we talk about in the book is the way models for an organization have taken over childhood,” Ms. Gutman said. “Kids are scheduled. Not only do children have less contact with nature, there’s less freedom to roam.”

In terms of public policy, she said, her hope for “Designing Modern Childhoods” is that it will strengthen “a commitment to the highest quality of design and construction in terms of the physical aspects of our children’s lives.”

“There are plenty of architects who would love to put their names on design for kids,” Ms. Gutman added, citing work by Richard Dattner and Peter Gisolfi. Mr. Dattner’s firm is designing Public School 276 in Battery Park City, the first school to be built under the city’s Green Schools Rating System. Mr. Gisolfi’s firm has been praised for its designs for the Pembroke Hill School in Kansas City, Mo., and the Agnes Irwin School in Rosemont, Pa.

Ms. Gutman credited the New York City Department of Parks and Recreation for maintaining an abundance of intensely used play spaces. It is a question of government priorities, she suggested, saying that American spaces for children generally lag behind those in Europe.

“The idea that a child deserves a high-quality environment in early childhood education hasn’t caught on here,” she said. “Since the government doesn’t pay for those buildings, who’s going to?”

“We don’t count on the state to provide welfare,” she said, “and we see it in the public landscapes for children.”