ARTS EDUCATION GETS RESPECT -- AND FUNDING

Conventional wisdom holds that with money limited and so many students foundering in math and reading, few public schools can afford to teach cappuccino crowd-pleasing subjects such as art and music — so few students can be expected to know Picasso from a piccolo, let alone answer koan-like questions about art versus nature.

Two weeks ago, students at in Eagle Rock led me to conclude that this conventional wisdom is bunk. It had, however, taken a massive, months-long intervention to bring my ignorance to that tipping point.

My first nudge came from my childhood pal Rick Shea, a country musician and master of any instrument that can be plucked or strummed. A year ago, Shea dragged me to Walt Disney Concert Hall to watch him perform with the Goin' South Band at the 's arts in education talent showcase.

I was stunned: Teachers and "arts coordinators" from districts all over Southern California sat head-bobbing as the Daughters of the Purple Sage, Ballet Folklorico do Brasil, an African American cowboy storyteller and maybe a couple of hundred other small dance companies, yarn-spinners and ensembles of every ethnic persuasion showed off their talents. Why? In hopes that a school would use its arts education budget to hire them for an assembly or instructional program.

My next and most persuasive nudge (is that what NFL middle linebackers call what they do?) came from Sandra Tsing Loh, a writer, performer and idea explosion whose rather intense interest in her children's education and public schools in general is reflected in the title of her still-touring one-woman play, "Mother on Fire."

Now the volunteer mastermind behind the Magnet Yenta advice column at latimes.com/schoolme, Loh has long lamented parents who never set foot in a public school yet incessantly yowl that Proposition 13 and the No Child Left Behind Act have left a scorched-earth arts landscape. She was told that she'd find "pictures of Bush hanging everywhere like pictures of Mao … this whole catastrophic thing going on."

Instead, she discovered a growing supply of money and an "underground railroad of arts-mad public school parents" eager to tap it.

Loh hopped aboard and, among other victories, helped her child's magnet school claim a grant from the VH1 cable channel that bought 36 new string instruments.

"Occasionally I've had to schlep violins from one building to another in a shopping cart, and now I always carry a pitch pipe in my fanny pack," Loh said.

But the kids are getting art. And the fiddling, pirouetting and oil painting aren't limited to schools terrorized by hypercaffeinated, type-A Valley parents, she assured me.

To back up her assertion, she ordered me to meet Richard Burrows, the 's mightily determined director of arts education.

Seven years ago, Burrows took charge of the district's new 10-year plan to ensure that every school offers instruction in art, music, dance and theater — by credentialed teachers.

With three years to go, 70% of the schools are on track, he says.

More than a few teachers and administrators, however, remain reluctant to take time away from core subjects for the arts, and more than a few of 's hundreds of school districts remain stupefied by taxpayers' sudden largesse.

After imploring calls from folks at the nonprofit Arts for All, I finally met with Laura Zucker, the group's founder and executive director.

Arts for All's goal is to cheerlead for arts programs and to keep Los Angeles County districts from squandering the money that taxpayers keep trying to hand them, Zucker said (though more diplomatically).

She then led me into a planning session with the . An Arts for All staffer spurred representatives from several schools to splatter a "sticky board" with color-coded notes on which they'd scrawled suggestions on how to arrange schedules, train teachers and plan lessons to make good use of the dollars already coming, and to find ways to wring more money from film studios and other businesses.

Back in , the most conspicuous sign of a commitment to the arts is also the one that stirs the most grumbling.

A few weeks ago, Richard Alonzo, one of the local district superintendents, escorted me around the site of the new high school for the arts that billionaire builder and do-gooder Eli Broad pushed for and partly paid for.

Hovering over the 101 Freeway, directly across from the Cathedral of Our Lady of the Angels, this high-priced new edifice is rising from the ruins of the old district headquarters as a stylish complement to Broad's other pet brainchild, the Grand Avenue project. When completed, sousaphonists from the L.A. Philharmonic might just walk over from Disney Hall to jam with a student brass quintet and actors might drop by to tutor in a new theater looking out on .

As we stroll the 10-acre site, dodging beeping backhoes, cranes laden with pipe, and 250 or so construction workers, my guides discuss details: An on-campus television studio will send programming to classrooms; district rules will be waived so that artists who aren't credentialed teachers can pass along their expertise; each music room will have running water in premeditated accommodation to all those trumpeters' spit valves.

When finished, 1,200 students from the neighborhood and an additional 500 from around the city should get as good an arts education as any on Earth.

That's what makes some snipe. I've heard the campus called a boondoggle to gratify Broad's ego. I've heard it said that the money spent there could pay for a lot of crayons in kindergarten classes districtwide.

I think the city deserves a dazzling arts school, a symbol of commitment to the creativity that fuels 's economy.

And as Rockdale Elementary was about to show me, it's not as if the campus will suck the art out of other schools.

My friend Carol Tanzman had been nagging me for more than a year to drop by the campus, which draws mainly Latino and Filipino students from its working-class neighborhood. I finally visited on a day when Tanzman, a traveling drama teacher for the district, was herding teachers and administrators from other schools through Rockdale's total- immersion arts program.

In one room, a teacher grilled kids about a Dorothea Lange photo of Depression-era children huddled with their mother, who had just sold the wheels off the family car.

And in yet another class, a teacher strummed a guitar as two girls chirped a song they had just written:

"I got the bulldog blues

I want one really bad …

I stole one from my neighbor

And got spanked by my dad."

A couple of the visiting teachers were clearly nervous about taking time from the district's rigid teaching constraints and test prep. In nominating the school for the 's Bravo Award last year, Tanzman offered some simple math. Since Rockdale began pumping up its arts program, its Academic Performance Index scores have risen from 555 in 1999 to 612 to 678 to 718 to 758 to 770 to 782. Last year they hit 799.

Who's to say whether this steady improvement has anything to do with the artsy stuff?

But even a metrics-addled philistine would have to acknowledge that art can boost creative, critical thinking.

Example: One Rockdale teacher told us her class had studied installation artist Christo, then discussed the definition of art. Somehow the question of the flower came up, and as the group pondered, one student offered this take:

"If a flower is a hybrid, that's art because someone designed it."

And Sandra and Richard Burrows. You rock!

Rockdale ES is a PTA school.

I and 3000 close personal friends have just returned from the annual state PTA convention in where young LAUSD artists were recognized as being among the best in the state and the nation in Reflections - PTA's national arts program. They all rocked! - the winning national award winning photograph in the High School division by an LAUSD student may just define rocking in the early 21st century! - smf 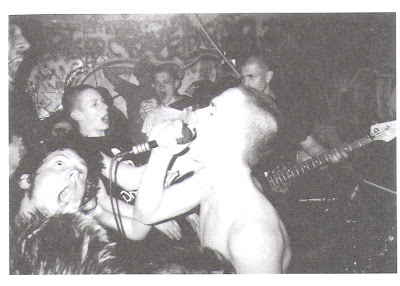