This is your school district under Mayoral Control Lite... 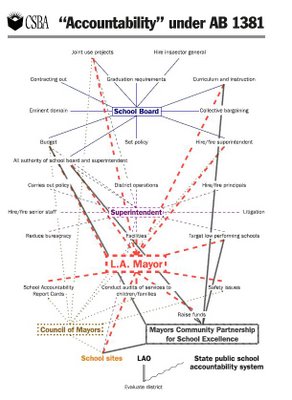 The following is the text of the letter that California School Boards Association sent to the members of the Senate Education Committee on . Copies of the letter were also sent to the Democratic and Republican leadership in both houses and the Governor.

The California School Boards Association (CSBA), which represents nearly 1,000 school districts and county boards of education statewide, is strongly opposed to AB 1381 (Nunez), as amended on June 21. This bill would shift authority for much of the governance of the Los Angeles Unified School District (LAUSD) from the elected school board to the mayor of and his or her sanctioned superintendent. Our concerns with the bill are as follows:

IT WOULD REDUCE—NOT INCREASE—ACCOUNTABILITY. Under AB 1381, LAUSD would be governed by a four-headed Hydra consisting of the elected governing board, a superintendent whose appointment would be subject to approval by the mayor, the mayor himself, and a Council of Mayors. Authority for the approval of budgets, fiscal management, collective bargaining, personnel decisions, facilities, and other matters would be split among the four heads. In addition, a fifth entity, “The Mayor’s Community Partnership for School Excellence,” (Community Partnership) would have “oversight” over three clusters of schools. “Oversight” is not defined, and the bill does not specify the boundaries (if any) between the responsibility of the Community Partnership and the responsibility of the district with respect to these schools.

All of this would result in a complex spider’s web of administrative and managerial confusion in which accountability would be blurred at best and nonexistent at worst.

It’s no wonder the LA Times concluded that “this deal spreads responsibility so thin that it’s hard to know who has it.” Under AB 1381, the district would become a virtual Petri dish for passing the buck.

IT DISENFRANCHISES FAMILIES AND VOTERS. By stripping authority away from the elected school board, voters will have their voices weakened. The 20 percent of LAUSD families that live outside of the City of —and therefore do not vote for the mayor—will be completely disenfranchised. The Council of Mayors is a weak substitute for true representation, because, with votes proportional to each city’s enrollment in LAUSD, the mayor would have 80 percent of the votes.

IT WOULD DISRUPT A SIX-YEAR TREND OF IMPRESSIVE STUDENT GAINS IN LAUSD. Contrary to conventional wisdom and much of the rhetoric surrounding this issue, LAUSD has outperformed not only other urban districts in but the state as a whole in terms of improvements on the state’s Academic Performance Index. LAUSD has achieved these impressive results despite serving a student population that has higher risk factors than students elsewhere in , such as increased homelessness, poverty, hunger, undiagnosed and/or untreated health problems, and a greater likelihood to be English language learners. The changes contained in AB 1381 are likely to be highly disruptive and run the risk of slowing—or even reversing—the gains that have already been realized.

IT CREATES CONFLICTS OF INTEREST. Especially with respect to facilities and litigation, AB 1381 gives the mayor or his/her superintendent carte blanche over matters where the city and school district might come into conflict. Decisions regarding the selection of new school sites, for example, are often the subject of intense negotiations between school districts and cities. The outcomes of these negotiations typically contain compromises in which the interests of the district’s students and families are balanced against the interests of the city. By shifting all authority for such decisions to the mayor, no one will have responsibility for standing up for the students and their families—or the authority to do so.

IT EXPANDS THE SCOPE OF COLLECTIVE BARGAINING. AB 1381 provides that, with respect to the clusters of schools overseen by the Community Partnership, “teachers and parents are full partners in the decisions that affect the schools.” Elsewhere (Section 35931 [a]), the bill provides that “employee organizations” shall share oversight as part of the Community Partnership. Taken together, these provide an even greater expansion of the scope of collective bargaining than was contained in AB 2160 (Goldberg) several years ago.

IT IS POOR EDUCATIONAL POLICY. School site decision making is a popular mantra, but its viability in the real world is not without limits. The striking success that LAUSD has realized over the past several years is due in large part to standardizing a district-wide curriculum and providing instructional materials and professional development around that curriculum. The students in LAUSD are highly transient. In many schools, more than half of the students in attendance at the beginning of the year are in a different school at the end of the year. Therefore, it is vitally important for student success that there be some consistency between the curriculum, instruction, and materials between schools so that when students (and sometimes teachers) move from school to school there is continuity in their educational experience.

AB 1381 would disrupt this continuity by allowing teachers at each school site to select that school’s instructional materials, curriculum, and methods of instruction. We know that this disruption has a negative effect on the achievement of students who experience it.

For these reasons, CSBA strongly opposes AB 1381 (Nunez) and respectfully urges your “NO” vote on this measure. If you have any questions about our position, please feel free to call me at 325-4020.